Director Ken Russell has long been one of England’s most iconoclastic, provocative and visually (and aurally) stunning directors. He first made a name for himself at the BBC, where he inaugurated a series of unconventional biopics of composers – a form he would continue to explore on the big screen. His breakthrough came in 1969 with the feature film adaptation of D.H. Lawrence’s WOMEN IN LOVE, a taboo-shattering classic that garnered Russell an Oscar nomination. From that point on he embarked on one audacious masterpiece after another, including a rock opera with The Who (TOMMY), a science fiction head trip (ALTERED STATES) and more unorthodox treatments of composers’ lives (LISZTOMANIA, MAHLER).

Join us at the Cinematheque for these films, as well as the beloved yet controversial horror film
THE DEVILS in a brand-new digital presentation, on the big screen as they were meant to be experienced!

We are thrilled to welcome BAFTA and Academy Award-nominated Ken Russell to the Aero and Egyptian Theatres! Be ready for an unforgettable weekend!

Ken Russell at the Aero Theatre

Friday, August 20 – 7:30 PM
BRAND-NEW digital presentation of THE DEVILS!
Double Feature:
THE DEVILS, 1971, Warner Bros., 108 min. Director Ken Russell’s adaptation of Aldous Huxley’s The Devils of Loudun remains one of the most disturbingly memorable films from the early 1970s. In 17th century France, Cardinal Richelieu’s minions use the womanizing of activist priest Urban Grandier (Oliver Reed) as an excuse to investigate his “diabolic possession” of the local nuns, including the demented, hunchbacked Mother Superior Sister Jeanne (an unforgettable Vanessa Redgrave).

Saturday, August 21 – 7:30 PM
Double Feature: Brand New Digital Cinema Presentation with
Quintophonic Soundtrack!
TOMMY, 1975, Sony Repertory, 111 min. Having already brought an outlandish, hellzapoppin’ quality to such films as THE DEVILS, director Ken Russell was the perfect choice to helm The Who’s landmark rock opera TOMMY, transforming it into a stream-of-consciousness catalog of wild performances from the likes of Roger Daltrey, Ann-Margret, Oliver Reed, Tina Turner, Elton John, Keith Moon, Jack Nicholson and others.
LISZTOMANIA, 1975, Warner Bros., 103 min. Director Ken Russell is at his outrageous, surreal best in this biopic of Franz Liszt (played by The Who’s Roger Daltrey), an aural, visual and sexual feast for all the senses. Thrill to the progressive-rock score by Rick Wakeman (of Yes), which somehow incorporates rock, Liszt and Wagner in all their majesty. Pop-culture references abound as Russell equates Liszt with the music superstars of the day – and don’t miss the giant penises! Discussion between films with director Ken Russell.

New Print!
THE MUSIC LOVERS, 1970, MGM Repertory, 123 min. Dir. Ken Russell. Ken Russell applies his typically outrageous and original sensibility to the story of Tchaikovsky (Richard Chamberlain) and the woman (Glenda Jackson) he marries and abandons. Eschewing the usual biopic conventions, Russell follows the life of the great composer through expressionistic flashbacks, nightmares and fantasy sequences. This is a film you can’t stop watching. From the love scene on the train (the actors thrashing about until they were ill from the tumult) to the awkward marriage of a man trying to suppress homosexual urges, Russell’s depiction of the composers life is far from a standard biography of an early 19th century composer! MAHLER will not be shown as previously announced due to print unavailability. Discussion between films with director Ken Russell. 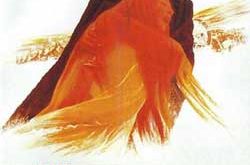