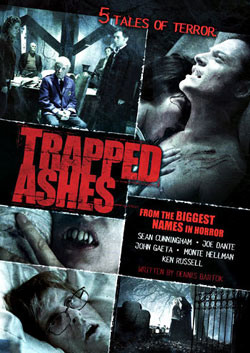 A group of people aboard a seemingly harmless bus tour to visit the hollywood set of the House of Horrors. Upon touring the legendary house, they all find themselves trapped to a single room within the house without exits. The tour guide mentions to get out alive they all have to tell there most horrifying personal stories as part of the deal. This simple setup is the brunt of the segues from one tale to the next to set up the stage of different directorial offerings. (The initial wraparound segment is directed by Joe Dante.) What follows are 4 tales told by its trapped occupants.

Trapped Ashes is a horror anthology that transitions from one story to another. Each story is helmed by a different noted director to give a variety of content to the mix. The talent includes directors: Joe Dante, John Gaeta, Ken Russell, Monte Hellman, and Sean S. Cunningham.

You’ll find that some of them strike more favorable than the others which is a preference of taste. Our first tale the ‘The Girl With The Gold Breasts’ directed by Ken Russell is one of the better involving a wannabe actress who signs on for a breast enlargement to better appeal to the Hollywood system.

It flows much like the Tales from the crypt episodes incorporating some odd humor to its story. Essentially she finds that her new breasts are in fact vampiric and need to feed on blood to survive. I must say as odd as that concept sounds, the reveal on it is a bit stomach turning when they are finally shown and might just ruin your boob attraction for a few days after.

Our next tale, the Sean S. Cunningham’s directed “Jibaku” is less impactful as it tells of a manga-like story of a woman who is visited by the corpse of a Buddhist monk for some heavy night sexing. it really doesn’t amount much more than that, but the practical FX are still pretty decent. In fact I’m really not sure what th point of this short was. Monte JHellman’s “Stanley’s Girlfriend” is a bit tiring as a filmmaker discovers the secret of his previous girlfriend who’s witchcraft has enabled her to stand the test of time. At this point the slow down has set in as your already anticipating the next tale to come a little sooner. This one was a pass for me.

Then lastly we have the daughter and her worm friend tale called “My Twin, the Worm” . I wont spoil things for ya, but I saw the conclusion coming a mile away.

Trapped Ashes isn’t a bad mix. It’s not very innovative though and falls into the episodic trappings of other anthology-style films. I think if you have a short attention span and like to jump from story to story this bit of cinema will do just fine. My only disappointment was that with all these directors, none of the tales really blew me away. They passed the time but that’s about it. It does have its fun moments so for that alone it might be worth the time. I’ve seen this compared to Masters of Horror, but in reality it doesn’t measure up. (The comparison most likely the fact that its got 5 diff noted directors)

Though for the sake of other anthology films I’ve seen recently it is one of the better ones, so I guess I leave it in your hands to be the judge.
These are also great for watching one then catching the rest when you have more time.