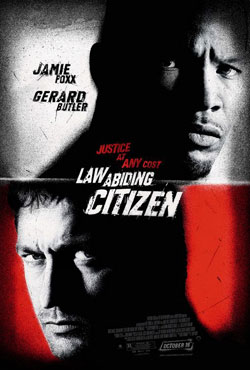 A frustrated man decides to take justice into his own hands after a plea bargain sets one of his family’s killers free. He targets not only the killer but also the district attorney and others involved in the deal

As cinema evolves, the lines between horror and action films seem to blur even more. Law Abiding Citizen, a big budget release stars top liners Gerard Butler as Clyde Shelton and Jamie Foxx as Nick Rice. Gerard comes to the table with a command performance as a wronged man who has seen his family killed right before his eyes. As the perpetrators are brought into court, he watches the legal system fail and bargains made as the prosecutor tries to maintain his perfect court record. Even though the evidence is clear, Clyde decides to take justice into his own hands after the murderer is given a light sentence while making a deal to frame his partner. What the courts didn’t anticipate was Clyde.

Frustrated Clyde’s handiwork begins to surface as the man sentenced to die meets complications in a violent execution. Meanwhile Clyde has even more diabolical plans for his freed family’s killer. Forced to watch himself as he’s being video taped in front of a mirror, the killer is sawn limb from limb while Clyde seeks his revenge. But this is only the beginning.

Apparently Clyde is an expert in the field of think tank assistance for the military and government. His background of technical timing and engineer calculations makes him a dangerous man of those who oppose him. When he turns himself in to the authorities, the fun has only begun. Nick Rice is brought into the limelight again as the details emerge from this former case. Clyde targets Nick and everyone around him that had anything to do with letting his families killer off the hook. In short it becomes all out war. The game begins and it appears that Clyde is calling the shots even from a prison cell. High tech gadgets, timed events are exchanged for the request of personal needs while incarcerated. It’s not to long before they start taking Clyde serious on his calls. Nick does his best to influence the captive while he makes demands. Soon its clear that they play his way or see more of the justice system fall around them.

As mentioned before, this pure action film blends a healthy dose of horror elements into it making it a top notch thrill ride. Not much unlike the feature “Untraceable”, “Law Abiding Citizen” manages to throw in a few brutal tortures and some hard core kills while at the same time painting the portrait of a hero. The hero angle though begins to shift as the extent of retribution is pushed too far. Gerard Butler takes to his role like a pro which in earlier times could of been a shoe-in for Mel Gibson to play the part. Jamie Foxx, the antagonist of the film actually manages to mirror off of Gerard with equal opposition. The idea of protagonist and antagonist also begins to blur a bit in the process. It’s Clydes confidence that becomes the real threat as he calls the shots with precision like none before.

Fast paced, moving and full of action, this film is a great journey that will keep viewers pretty glued to their seats. Alot of the details are revealed over time making it truly clever piece as well right up to the very end. Films of the vigilante justice sort are nothing new, though the filmmakers make it work with high tech gadgets, a slight air of humor and a few shocking moments that throw you off guard. All the elements that make this a great rental if you didn’t catch it in the theaters. The film was directed by F. Gary Grayand written by Kurt Wimmer. Law Abiding Citizen was one of the better intense action films of 2009. Upon reviewing this I have now sat thru it 3 times and haven’t tired of it yet. Highly recommended cinema that puts Gerard and Jamie’s name higher on the films to watch list.