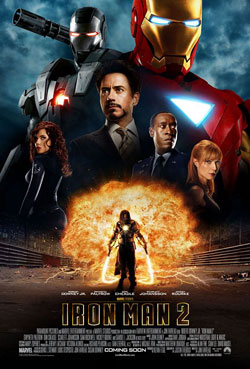 With the world now aware of his dual life as the armored superhero Iron Man, billionaire inventor Tony Stark (Robert Downey Jr.) faces pressure from the government, the press, and the public to share his technology with the military. Unwilling to let go of his invention, Stark, along with Pepper Potts (Gwyneth Paltrow), and James “Rhodey” Rhodes (Don Cheadle) at his side, must forge new alliances — and confront powerful enemies.

Iron man 2 arrives with everything a hero film is cracked up to be. Carrying over from the debut, Tony Stark is back as narcissistic as ever. Though now his full identity as Iron man is a well known factor and at the focal point of everything including the government. With larger than life appearances funded by a extremely profitable business, Iron man is unmatched in the arena of technology and war machines. The government is concerned and like any powerful force are determined to own Tony, the Iron man and the technology he has worked so hard on. Tony however has no intention of leaving such a complex piece of machinery in the hands of war mongers and executives. The world celebrates a new age of peace that seems rooted at the weaponry Stark’s industry has in place.

With heroes comes villains, and Mickey Rourke is on hand to deliver a formidable opponent in the form of Ivan Vanko. Vanko is a defected Russian who’s father was responsible for some of the early designs that Tony’s father took credit for. At least as a co-creator. Though with Tony now gathering all the attention (and riches) Ivan, a brilliant inventor himself, plans retribution in the form of a modified suit that features a lethal laser whip.

This whip and Ivan confront Tony and Iron man to the fullest extent. That is ….until he’s taken into custody and removed of his invention. Though in the wing waits Justin Hammer, CEO of Hammer industries, a lesser competitor to Stark Industries. His motive…to work for the government, steal the technology and bring in Ivan to help him build a counter force that matches Tony’s own. Sam Rockwell, provides his usual style of shifty, evil and cunning acting in the role of Justin Hammer.

Tony, in the mean time deals with a heart that is going bad due to toxicity levels, granting his partner Pepper Potts (Gwyneth Paltrow) the duty of becoming CEO of Stark and his old friend Lt. Col. James ‘Rhodey’ Rhodes who is caught between his duty to the service and his friendship to Tony. Garry Shandling in his rather well fed current look plays the role of Senator Stern, part of the Government force that disagrees with Tony’s ownership of such a high tech weapon. What was surprising was that the heroes and villains were never mentioned by name in the film. Ivan who the posters were calling “Whiplash” and Natasha Romanoff who’s legacy as “Black Widow” is well documented in comic book circles.

Samuel L. Jackson was on hand as the enigmatic Nick Fury who’s behind the scenes secrecy is slowly becoming a “force within” scenario. We are however tempted by a small cameo folder reading “Avengers” project. If the pieces don’t quite fit together yet…they will …that is, once all the other needed heroes make their debut in the blockbuster circle. As of this writing IMDB currently lists “The Avengers” due to debut in 2012 with the inclusion of Iron Man, Captain America, Hulk, and Nick Fury.

I’m guessing though that a few more characters will get added which include the “franchise in his own right”, Thor. In short, the film is action packed, fun to watch and filled to the brim with plenty of high tech special FX work. Fans of the first one will really enjoy the enhanced progression of Iron Man and the inclusion this time of a few new characters and faces.

Mickey Rourke makes a inspiring performance as a perfect villain to Iron Man’s character. Robert Downey Jr. plays his part like it was written for him providing the over excessive personality of Tony Stark who relishes in his riches but is also haunted by his own genius. Don Cheadle replaces Terrence Howard in the role of Rhodey. This works seamlessly but is cited as a falling out between Terrence Howard and Marvel comics. Scarlett Johansson works her magic as Natalie Rushman / Natasha Romanoff and the “unannounced” Black Widow.

It was reported that the original role was assigned to Emily Blunt who had to pull out due to scheduling conflicts. Regardless Scarlett is beautiful, savvy and an exciting addition in her action packed performance. Digging into the trivia for the film it is reported per IMDB:

To prepare for his role as Ivan Vanko/Whiplash, Mickey Rourke paid a visit to Butyrka Prison, Moscow: “I tried to incorporate the whole Russian philosophy. It’s a culture of its own and I really enjoyed doing the research and meeting the people and they were very gracious there at the prison.” Rourke also recommended that half of Vanko’s dialogue be in Russian, that he have a Slav accent, and that he keep a pet.

The character of Ivan Vanko (Mickey Rourke) is a combination of Iron Man’s enemy the Crimson Dynamo (Dr Vanko, who wears armor that can control electricity) and the super villain Whiplash (who possesses a specially-designed razor/acid whip). In addition, the film’s Whiplash gets its nationality and real name from the comics’ first incarnation of Crimson Dynamo.

Samuel L. Jackson was promised that Nick Fury would be given more screen time by director Jon Favreau. Jackson almost didn’t return to play Fury, due to problems with contract negotiations, but secured a landmark nine-picture deal to play Nick Fury not only in this film but in many other Marvel Studio productions.

Directed by Jon Favreau (also director of the first inclusion) it’s apparent that the Iron Man franchise is a top winner that provides that perfect blend of Summer Block buster appeal mixed with all kinds of visual eye candy action. Fans of the comic book know that like Spiderman, Iron man has a few decades of rich opponents to face up again. I for one am looking forward to the Marvel comics inspired directions.