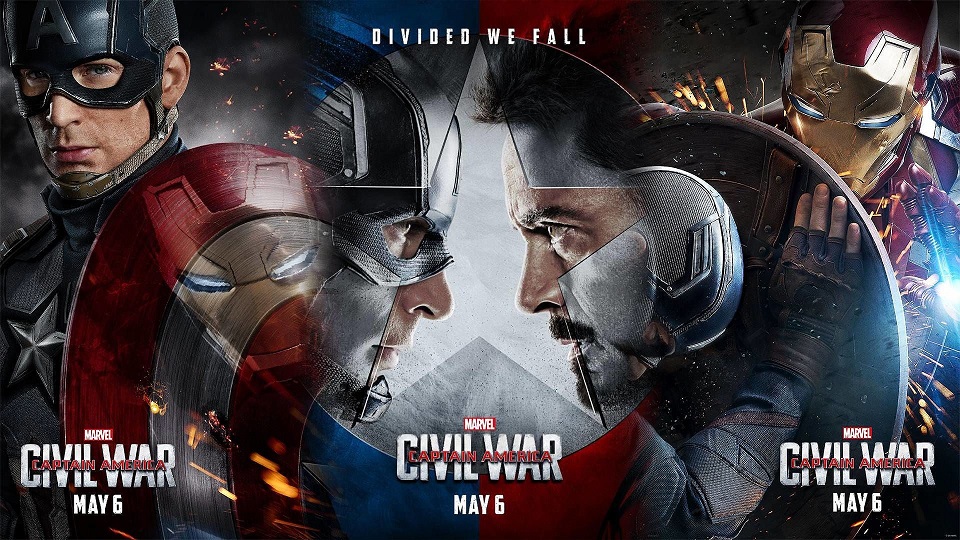 With many people fearing the actions of super heroes, the government decides to push for the Hero Registration Act, a law that limits heroes and their actions. This results in a division within The Avengers. Iron Man stands with this act, claiming that heroes and their actions must be kept in check otherwise cities will continue to be destroyed and innocent lives will be lost. But Captain America feels that the act denies heroes the ability to act immediately, and that the world can’t rely on a government panel to protect it. This escalates into an all-out war between Team Iron Man (Iron Man, Black Panther, Vision, Black Widow, War Machine, and Spiderman) and Team Captain America (Captain America, Winter Soldier, Falcon, Scarlet Witch, Hawkeye, and Ant Man) while a new villain emerges… 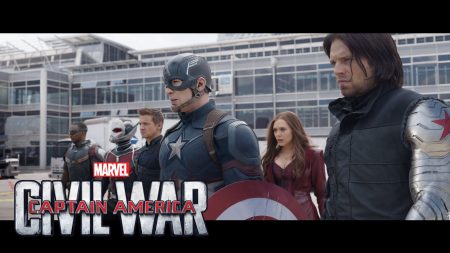 Marvel Studios and Disney films have created a near seamless universe featuring characters from Marvel’s vast library of comic books over the last 8 years. Just think about it for a second, did you think that after watching Iron Man (2008) that you’d still be watching not only him but an entire phalanx of superhero films in the 8 years afterwards? Films that featured characters like The Hulk, Thor, Captain America and a walking tree that calls itself Groot? And even if you did, did it ever occur to you that all of these films would be somehow related to each other, and that characters from one film would appear in another?

Hell, although it existed before just about any Marvel film, do you realize that audiences have been essentially trained by Marvel to quietly sit through a film’s end credits just to see the patented Stinger that Marvel films has just about perfected? Marvel has meticulously set up their universe, releasing films in specifically timed waves (or Phases as they call them). Phase One began with Iron Man and ended with The Avengers (2012). Phase Two began with Iron Man 3 (2013) and ended with Ant-Man (2015). Marvel now embarks on Phase Three with the latest saga in the Captain America series called Captain America: Civil War, and if this is how Phase Three begins then all of us better strap ourselves into our seats in preparation for how it ends because this is easily the best film Marvel has produced so far. 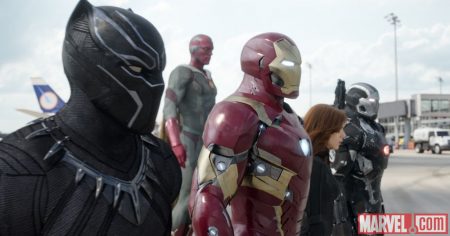 As the film begins, Captain America (Chris Evans) is leading the new Avengers (as seen at the end of Avengers: Age Of Ultron) on a mission to Lagos where they must intercept a villain called Crossbones (Frank Grillo) before he steals a vial containing a substance that can kill millions. And while Cap and his team recover the vial, a mistake made by The Scarlet Witch (Elizabeth Olsen) results in the accidental deaths of dozens of innocent bystanders, and this mistake leads to the central theme of the film. Over 100 governments around the world have agreed on a new set of rules for “Enhanced Individuals” called The Sokovia Accords (Named after the country that was ripped from the earth and lifted into the sky by Ultron in Avengers: Age Of Ultron). In essence, the accords state that all super heroes would act as a managed task force, to be deployed only when agreed to by the world’s governments. Tony Stark aka Iron Man (Robert Downey Jr) is on board with this new setup. Also in agreement are James Rhodes aka War Machine (Don Cheadle), Natasha Romanoff aka Black Widow (Scarlett Johansson), The Vision (Paul Bettany) and newly introduced heroes Black Panther (Chadwick Boseman) and everyone’s favorite neighborhood Spider-Man (Tom Holland). 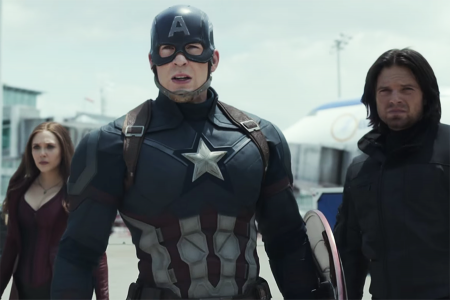 But Captain America disagrees with the accords, stating that sometimes dire situations need an immediate response. He believes that to wait for a panel to give the go ahead to proceed might cost millions of lives and untold damage to the earth. And he’s not alone in that belief, he has Bucky Barnes aka The Winter Soldier (Sebastian Stan), Sam Wilson aka The Falcon (Anthony Mackie), Clint Barton aka Hawkeye (Jeremy Renner), Scott Lang aka Ant-Man (Paul Rudd) and the aforementioned Scarlet Witch backing him up. And lets face it, although the plot is a bit deeper than what I’ve just described, what everyone wants to see is a bunch of super heroes going at each other tooth and nail.

Luckily writers Christopher Markus & Stephen McFeely know exactly what the masses want to see, and they brilliantly mesh the mature side of the script (Political intrigue, International espionage) with the fanboy side of it (Team Iron Man vs Team Capt. America) into a wonderfully entertaining melange of excitement that never lets up. They even introduce a villain, Zemo (Daniel Bruhl), who not only isn’t super powered, he also isn’t someone you’d dislike. It’s fair to say that in the end, he’ll have a portion of the audience feeling for him and fully understanding his rationale for doing what he does. Directors Anthony & Joe Russo have already proven they know how to direct action films (2014’s Captain America: The Winter Soldier), and here they continue to display their innate talent for combining wild, over the top action set pieces with quiet and emotional scenes that further the story line without having to break something over the audiences heads to keep them interested. 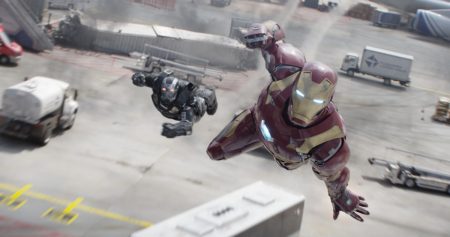 As previously mentioned, as great as the film’s quieter moments are, it’s the big fight scene midway through the film that’s inspired millions of geekgasms worldwide. And it is indeed the most exciting fight scene I’ve ever seen in any superhero film by Marvel or anyone else. As the heroes clash, the film manages to highlight the one on one scenes of fighting just as well as the group scenes. I honestly expected something of a mess as costumed characters ran into each other, but there are more than a few moments of intricate one on one fight scenes interspersed with the larger group battle scenes that highlight some excellent fight choreography. In addition, it isn’t a quick blink and you’ll miss it battle. It’s a long and exhausting battle that takes up a good 20 – 25 minutes or so, with plenty of highlights to be marveled over (See what I just did there)?

The script also gives both Spider-Man and Black Panther rather hefty roles in the film, with the panther’s story arc being one of the reasons why the whole story takes place, these aren’t just cameos intended to titillate audiences until the Spider Man & Black Panther solo films are released (2017 & 2018 respectively). Paul Rudd’s Ant-Man also has a big surprise in store for Team Iron Man that’s sure to make audiences squeal with delight (The audience I saw it with practically levitated off of their seats in ecstasy when it happened). Everyone involved bring a true sense of realism and humanity to their characters, even Bettany’s Vision (who isn’t even human) has a few moments of what I can only describe as “Wisdom” that surprise his fellow avengers. By now Downey Jr can perform Stark in his sleep, but he still brings the emotional heft necessary to make the character resonate with audiences here. This is the seventh film he appears in as Tony Stark (with at least 3 more to come) and he’s still just as engaging now as he was back in 2008.

Chris Evans has grown into the role of Steve Rogers/Capt. America and as a matter of fact, he’s become the real heart and soul of the Marvel Universe and his square chin & broad shoulders belie the everyman he really is underneath it all. It’s easy to see how anyone would follow him into combat. All the other actors here have their moments to shine, and truly none of them disappoint, which is near unheard of in a film of this size. But special mention must be made of the trio of Boseman, Holland and Rudd. Boseman gives the Black Panther a quiet seething intensity that fairly smolders off the screen. Add to that an extremely sleek/streamlined outfit and you have one hell of a cool character indeed. Holland gives his Spider-Man what Tobey Maguire and Andrew Garfield couldn’t give to their versions of the character – youthful exuberance & wonder! His “Holy Cow! I’m a superhero fighting other superheroes” attitude is both realistic and refreshing. Plus he actually looks like a teenager, where both Maguire & Garfield didn’t (Because they weren’t). Rudd retains the sense of humor that made the Ant-Man film so enjoyable here, and has some of the best lines in the film. It’s obvious to see that he’s having a ball in his scenes, and it’s infectious. 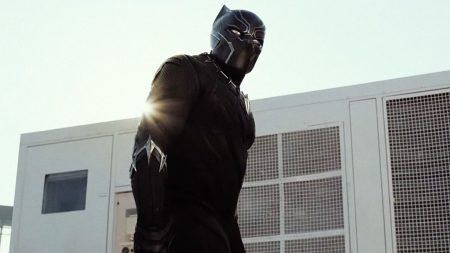 Now as much as I enjoyed this film, I have a few things I have to nit pick about. Firstly, some of the fight scenes are almost too kinetic, too fast paced for my eye to follow. The herky jerky hand held camera movements during these select scenes doesn’t help matters any either. I also had an issue with some of the CGI here, especially early on. Maybe it’s because I watched this in 3D, but there are a few character animations that didn’t look too good. But they come & go so quickly that it doesn’t hurt the film, and you have to be paying really close attention to them to even notice. Again, not a deal breaker by any means, but I noticed. Speaking of the 3D in the film, it’s perfectly decent and lends a nice sense of depth to the proceedings. But there’s nothing in the film that takes true advantage of the process, nothing that comes out of the screen at you, so you aren’t really missing much if you see it in 2D. 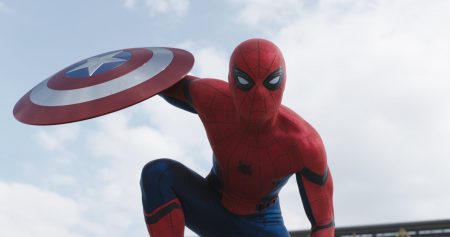 Captain America: Civil War is the best superhero film Marvel has produced up till now by far. It features a mature story that has emotional weight and high drama, but it also features some of the best action scenes in any film ever produced. And it also demonstrates how to make a mega budgeted comic book film that introduces new characters intelligently and gives them plenty of screen time as well. It seems to me there was another one of these films released some weeks ago that attempted to do the same and failed miserably (Albeit spectacularly). You know the one I’m talking about, don’t you? It featured a flying guy in blue underwear and a dude dressed like a bat…