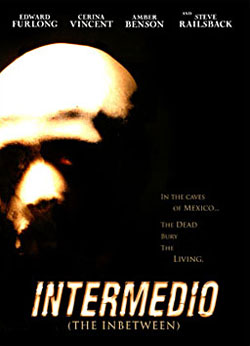 Four teenagers, Malik, Gem, Barbie and Wes, take a excursion to an old series of mine tunnels under the border area of California and Mexico where they, and a few other people traveling by, become trapped and are soon set upon by ghosts of a series of victims who are under the control of a warlock bent on carnage.

When Wes shows up with hair-brained idea to make extra cash by purchasing some across-the-border-weed, the gang jumps at the chance to make a needed extra 60K off the deal. The plan is to make way per the underground catacombs outlined in his father’s map to meet his connection half way.

One short road trip and there off to there destination. Along the way we get a bit of a back story that tells us that Malick and Gen’s father went into the tunnels when they were young and never returned. The incident brought the 2 siblings closer together as they assumed he had just taken off without reason. Much older now they seem unbothered by returning to those same tunnels in the interest of gaining a nice profit. Once the 4 start there quest, we are also given the back story of what “Intermedio” means. Which I’m glad they did or I would be asking that question as well.

As it is explained, Intermedio is the “in between”, an old spanish myth or urban legend that tells of spirits stuck between the living and the dead. A form of trapped souls that occupy these tunnels.

The film is mostly mexican based scenery with some added sets to give us some sense of destination. Steve Railsback stars as the creep who wanders within the caverns. Because of a past wrong dealing with his son, he has gone corrupt to anyone who enters the tunnels. He also has harnessed a trinket that he is able to summon and control spirits by dropping blood on the floor. These spirits basically zip down the corridors and kill anyone in there path. The idea is meant well but falls a bit short as a plot point. I got the feeling that really the script was written around a means to use these tunnels as a set device.

The expected level of tunnel anxiety sets in on the teens who start to lose their wits to the new threat. It provides an avenue for over acting which on one hand is quite comical when you get down to it. Though it’s assumed that the acting was directed that way with the material they were given to work with.

The FX were mostly a letdown. A few few gore scenes were added in for good measure though the CGI scenes were just not to par. I suppose they are for a low budget feature but enough to appreciate. As viewers we are little more refined these days than accepting a sped up ghost wearing a skeleton Halloween costume to buy into these things. The moments that were requiring a obvious higher budget to pull off were simply overlayed with sped up footage to blur the instances.

Hottie Cerina Vincent provides best performance along with co-star Edward Furlong. Also it should be noted that the characters although playing brother and sister actually have more chemistry than the boyfriend/girlfriend relationships written into the script. I’m not sure if it was intended that way but there is definitely an odd incestual relationship going on which is further enhanced in the final scene where Cerina takes off her top and climbs into bed with her brother Malick. Probably the only real high point in this film for me but a nice way to end a journey.

The film contains alot of continuity flubs, which I’ve noticed are pointed out elsewhere as well. Mirror imaged writing on t-shirts is an obvious one. However the one that stood out to me was Cerina Vincent’s character Gen. While its hard not to notice Gen wearing a thong through most of the film, in one scene she is wearing completely different underwear and then 2 minutes later back to the black thong. Most likely a cutaway that was shot on a later date, though these kind of things tend to stick out to viewers paying attention.

Intermedio won’t sit on your top ten shelf but it has its moments. It screams of rental material that really only provides one point of interest. Cerina Vincent.

Edward is along for the ride, though we’ve seen him work better with better material. Smart viewers will scoff at the cheesy Saturday afternoon FX work but may still enjoy the “practical Fx” work provided. If you’ve got time to kill then have at it.