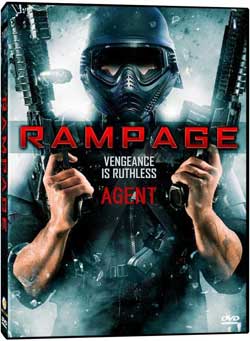 When the pressures of everyday life get to a mentally unstable young man named Bill he ends up snapping. He builds a Kevlar suit of body armor and proceeds to go on a killing spree across the small town where he lives. You see, Bill believes that overpopulation is the reason that there are so many problems in the world, and his solution is to go out and kill as many people as he can so that the ones he leaves alive will have a better life. Will he be able to carry out his plan for population control or will the local police be able to stop him before he wipes out the whole town?

Uwe Boll. His name often strikes fear into the hearts of movie fans everywhere. He is responsible for several horrible film adaptations of several popular video games, and most gamers look at him with the same disdain as comic book fans look at Joel Shumacher (who made a mockery of the Batman franchise in the 1990’s). I have only seen one of his movies, and that was the very terrible “House of the Dead (it is hard to screw up a zombie flick, but somehow he managed to succeed with this film).” I knew very little about “Rampage,” and to be honest after I found out Boll directed it I assumed it was a movie version of the video game “Rampage” that was popular back in the day. Fortunately it wasn’t a movie centered around that game and believe it or not, even with Boll at the helm it actually wasn’t a bad movie.

I have always liked movies about someone being so bothered by the stresses of daily life they he or she snaps and ends up going on a killing spree. I really liked the 1993 Michael Douglas classic “Falling Down (which I just realized was directed by Shumacher, speak of the devil),” and there were a lot of things about “Rampage” that reminded me of that film. I think that due to huge amounts of stress and countless irritations that most people have come close to reaching a breaking point in their lives (I know that I have), so I can understand why Bill does what he does to an extent. Of course I have never gone on a crazed killing spree as a result and don’t encourage anyone else to do so, but I think that most viewers will be able to relate to Bill on some levels if they are going through a stressful time or had to be around annoying people such as an asshole boss. 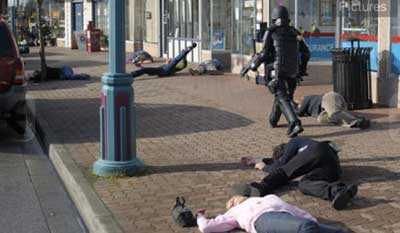 I think that the main reason I liked the movie (other than the fact that I liked the character of Bill) was that there was usually something always going on. There is not a lot of lag time to be found here, and I was happy about that. I wouldn’t really call it a horror film as it is more of an action flick, but there are some things that take place that I am sure will frighten some viewers. It has a pretty realistic premise and since what happens in the movie could actually take place (and has, unfortunately) in the real world, I see this movie really bothering people and looking at that strange loner who always keeps to himself at work in a different light. I am all about the werewolf, zombie, and unstoppable killers like Jason, Michael and Freddy, but every once in a while it is nice to watch a movie that is a bit more realistic like this one.

I don’t want to give anything away, but let me just say that the last half of the movie is excellent. I really like how things play out in the end and I was actually surprised at what happens toward the end. I thought I knew exactly how it was going to end but I’ll admit that I was totally wrong. Some people may hate the ending but I for one liked it and didn’t have a problem with it.

“Rampage” isn’t for everyone, but I liked it. It isn’t anything new or original, but there was just something about it that I liked. If you are looking for a film with intense character development and an original concept then I would advise you to skip this one, but on the other hand if you just want to watch a brainless movie about a nut in body armor going around shooting people then give this flick a try.