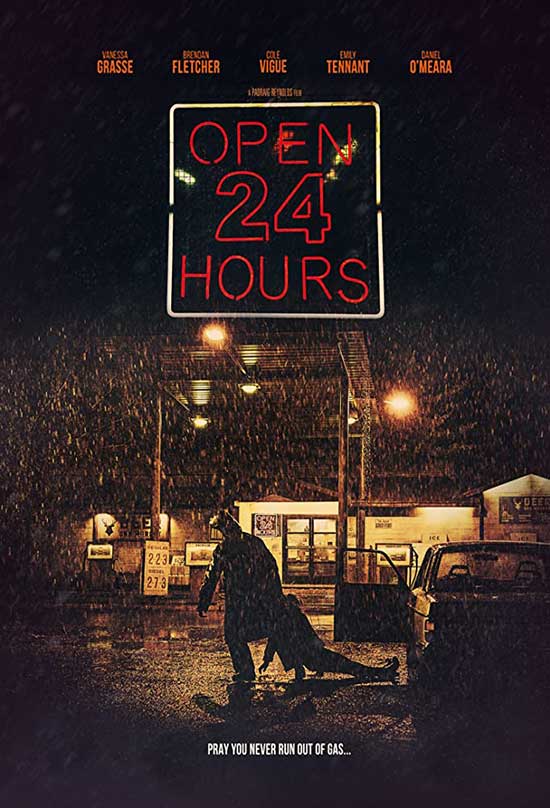 After setting her serial killer boyfriend on fire, a paranoid delusional woman gets a job at an all-night gas station.

A paranoid delusional woman, Mary White, has just been released from a mental hospital for setting her serial killer boyfriend on fire. Mary suffers from severe paranoia and hallucinations. Her boyfriend, James Lincoln Fields, is a brutal serial killer known as The Rain Ripper.

He enjoyed murdering people and making Mary watch. After being released from the Hospital, Mary’s vulnerable demeanor aids her in obtaining employment at an all-night gas station. However, left alone to her own devices, her paranoia and hallucinations return with furious consequences. Things take a gruesome turn when customers and friends suddenly start turning up dead and mutilated all around her… 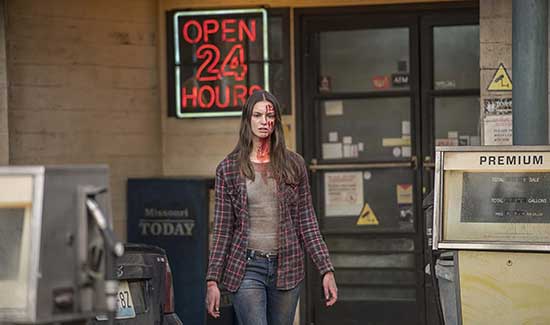 Padraig Reynolds wrote and directed this film. It was filmed in Serbia and based off a gas station in Mississippi. Padriag shared that information during an interview he did with Horrornews.net. Vanessa Grasse plays Mary. The music makes it creepier. (When you watch it, you’ll get it. The songs are fitting and placed well.) Mary is looking for a job after going through some trauma. Mary’s boyfriend was a serial killer. Mary is filling out her application to work at a gas station. It’s a creepy gas station in the middle of nowhere and the manager finds out she went to prison. He wants to know why, and Mary tells him. The manager hires Mary. (We love supportive people.)

Debbie (Emily Tennant) is happy for her friend. She gave Mary a ride. There are a few movies with memorable gas station moments. Urban Legends, Kalifornia, The Hitcher (1986), Thelma and Louise, No Country For Old Men, We Summon the Darkness, Homefront. There are a few and yes some of those are not horror movies but they should be mentioned.

James (Cole Vigue) is the boyfriend and he was killing people in front of Mary. Mary has some severe PTSD and that is scary. Mary is seeing him in places and seeing things. She has lunch with Debbie and Debbie gives her a pep-talk, some motivating words of encouragement. “The past is in the past. Live in the moment” type stuff. Debbie picks Mary up to take her to work… at the gas station. Mary also doesn’t want a phone. It’s understandable yet, what if she must call for help? (I have so many questions.) Debbie took the words out of my mouth. The gas station is in the middle of nowhere.

We meet Bobby (Brendan Fletcher), he is in charge at night. Brendan is familiar in the horror world courtesy of Freddy vs. Jason. Debbie is a good friend, she goes in to check out the gas station, Mary rings her up as her first customer. (It’s still creepy. The lighting is better than some creepy, random, middle of nowhere gas stations I’ve been in. Also, check your back seat and look around you to make sure there are no hammer or axe wielding serial killers lurking around. Okay, back to the movie review.)

Bobby gives Mary the keys and he heads out with beer to-go. James is still lurking out in the rain. He has his raincoat on. (Maybe he watched, I Know What You Did Last Summer a few too many times.) Mary is making her rounds in the gas station. I think most people have an innate sense of survival. You sense when someone is near you or you feel a presence. Fight or flight. When you’ve dealt with trauma it can intensify, not that I’m an expert but I’ve been through some horrible stuff.

Mary is in the middle of nowhere with a killer in a gas station. A gas station that you may have to look for certain areas to hide, she didn’t get to previously scope the place out. She didn’t get to see all the areas of the gas station. A trucker (Tomi May) shows up for gas and snacks. It’s hard to imagine when you’ve gone through something horrible and you must hear some of the obnoxious comments like Mary hears in the movie. We learn some things about the truck driver. Bobby comes to check on Mary.

Mary has a heart to heart with Bobby. It gets creepier, people are disappearing. Mary is still at the gas station; this is the longest night ever. Her parole officer checks on her. It gets bad real fast. This story is interesting, the shots in the film are great. It is slow-paced when it needs to be. Open 24 Hours is exciting and fun to watch. If you can watch it with friends, do that. This lady shows up. Karen Rogers (Selina Giles) and she also has a raincoat on. She blames Mary for the death of her daughter. 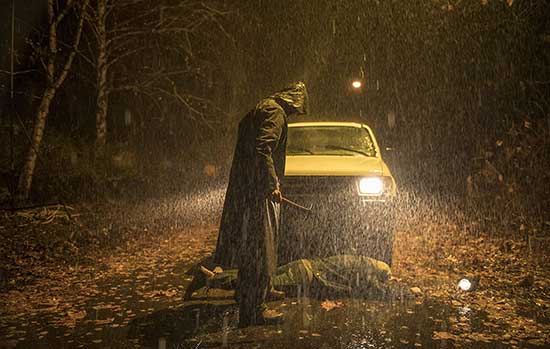 Mary needs to grab what she can and start throwing stuff. Mary’s flight or fight kicked in long ago. The parole officer comes back and delivers some bad news. (No one ever has good news.) James is just killing everyone. The trucker comes back for his credit card, he doesn’t know there are multiple homicides taking place now. (I am so nervous. This movie is wrecking my nerves.) Oh, this is so stressful. Poor Mary… Cole Vigue made this character creepy. He’s walking slow, he is taking his time tormenting and scaring these people. He also took stalking to the next level. Padraig Reynolds delivered. He wrote and directed Open 24 Hours. Make sure to check it out.