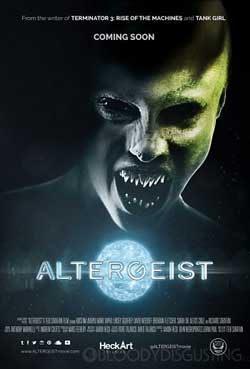 King’s Ransom Winery is one of the most haunted places in America, with a long history of bizarre suicides. Six ghost hunters have been given the rare opportunity to conduct a paranormal investigation. What they discover terrifies them

I’d like to preface this review by saying that I’m not usually the sort of person who’s left wondering what the hell just happened after having watched a film. I tried to revisit some scenes, determined to get to the bottom of the whole thing, but, alas… I’m stumped.

Altergeist, Tedi Sarafian’s directorial debut, documents yet another journey into the paranormal. The setup is pretty solid, though not entirely original – a group of friends, describing themselves as paranormal investigators, make their way to ‘one of the most haunted places in the United States’ – The King’s Ransom Winery, located in California. It’s closed for just one weekend of the year and the owner, Ashen Till (David Weidoff), has agreed to give them free roam of the building during this time. Supposedly, the winery harbours a grim secret, and its history is littered with bizarre and unexplained female suicides. While the group are excited at the opportunity to explore, it seems that their main intention is to film some footage for their television show in the hopes of securing a network contract.

Their investigation during the first night proves, without a doubt, that something supernatural is going on within the winery. Of course, it doesn’t take long for things to go awry. Tensions among the group rise, and personal affairs are dragged into their arguments – Theresa (Kristina Anapau), the pregnant director of the investigation, is accused of cheating by Dax (Mark Hapka), the father of her child; Jason (Brendan Fletcher), frustrated by his unrequited affections for his childhood friend, Sarah (Linsey Godfrey), brings up the abuse she suffered at the hands of her father. Mike (Alexis Cruz) and his partner, Maya (Sarah Oh) attempt to resolve their own relationship issues. Suspicions begin to arise surrounding Ashen Till’s past and the sudden death of his sister.

As the night goes on, while they’re divided by their own problems, sinister forces begin to work against the group, resulting in some interesting murder scenes. There are plenty of jump scares to be had, and the select use of found footage from hand-held or body-mounted cameras helps to convey the fear and confusion of the investigators as they stumble through the darkness.

However, in spite of the strength of some of the concepts presented, Altergeist leaves much to be desired. Many of the scenes are shot in low light in an attempt to maintain the creepy atmosphere, but it makes it almost impossible to tell what’s going on. Whether this was the director’s intention or not, combined with an increasingly convoluted storyline, it made the film difficult to follow at times, and things seemed to happen out of the blue with no real explanation or follow-up. The (spoiler) introduction of extra-terrestrials towards the end, while intended to explain some of the previous events, felt a little too slapdash for my liking; it was a clumsy attempt to wrap things up, and given that Altergeist is billed as a sci-fi/horror, it would have been nice to see more of this aspect earlier on.

Truthfully, the whole thing felt like it had ended a few times before the actual finale of the film – I was half expecting the credits to roll, only to find that there were another thirty minutes of screenplay still to watch. I did, however, enjoy the end when it finally came – the ultimate scenes revealed a nice twist ending which was satisfying enough. Having said that, it’s only really possible to enjoy it if you’re able to move away from the whole ‘alien’ thing. (Who are they? Where did they come from? What was Sarafian’s intention? If you figure it out, then let me know – I think I’m just missing the point.)

In conclusion, I’d say that Altergeist was an interesting attempt to combine a typical supernatural horror/thriller with something a little more out of this world. Considering the sheer number of generic paranormal films that have made their way into cinemas in the past few years, it was refreshing to see something a little different, even if it wasn’t necessarily successful. The set-up was nothing special, and while I’m partial to a little bit of found footage, there’s no denying that it’s been done to death since the release of The Blair Witch Project in 1999. But if you’re not picky and you’re looking for a film that goes a tad deeper than most mainstream ghost flicks, then maybe Altergeist is for you. 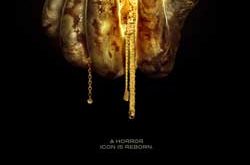