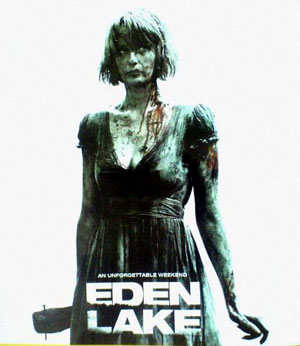 Jenny (Kelly Reilly) and Steve (Michael Fassbender) are in love and about to get engaged during a calm lake getaway — but they’ll first have to survive a pillaging and murderous gang of kids, led by the psychotic Brett (Jack O’Connell), who suddenly arrives on their front lawn. When Steve tries to quell the violence, matters turn from scary to gruesomely deadly. James Gandhi, Bronson Webb, Thomas Gill and Thomas Turgoose co-star.

If watching Eden Lake taught me anything, it’s that British children are insanely violent sociopaths who like to set people on fire.

The debut feature of writer/director James Watkins, Eden Lake is a film for those who like to see innocent people hunted, tortured, and killed, all while performing their best rendition of Mystery Science Theater 3000 to every single cliché and standard survival thriller trope that pervades the film from beginning to end. But in the end, it’s ok, because despite the film’s weaknesses, Watkins manages to entertain and deliver a delightfully depraved and cringe-inducing thriller that makes me never, ever want to visit England.

The plot is relatively simple for films of this nature, but is distinguished from the rest in that it’s actually well acted, not campy, and overtly disturbing to the point where I blurted out “Holy sh*t! at the scene of a child being set on fire” A young beautiful couple, Steve and Jenny, whose British accents only serve to amplify their beauty, go on a seemingly idyllic camping trip at a little secluded beach called Eden Lake (duh). Everything seems to be going well until a bunch of ruffians, no older than fourteen years of age and no younger than, say, ten, start annoying them with loud music and voyeurism. Eventually their car and other belongings are stolen by the children. When finally confronted, a fight breaks out and the dog belonging to the ringleader of this vicious band of misfits is accidentally shanked. What follows is a game of cat-and-mouse beleaguered with clichés, lots of blood, and a garbage can filled with poop.

The movie is incredibly violent and deeply disturbing. Violence involving children is not new or feared in horror, but when given the context of reality – real people, real situations, and real fears, all wrapped up in the guise of “What if this actually happened?” – it is elevated to an entirely new level. The children in this film are violent, sadistic, and for the majority of the film devoid of anything resembling that which makes us civilized human beings. One incredibly vicious scene has one of the children forcing all the others to take turns stabbing, slicing, and cutting into Steve while the lone female films the gruesome events. People being set on fire, more stabbings, and minor impalements follow, but the most gruesome scene features no blood and only your imagination.

Only toward the end of their onslaught do the children begin to show something that resembles remorse, cloaked heavily in an aura of fear over being caught for their heinous acts. Brett, ringleader of the misanthropic band of evil little sh*ts, remains the only one truly dedicated to the cause (yeah, killing innocent couples is a cause now), but toward the end of the film the cracks begin to show, albeit subtly, and don’t truly manifest themselves until the final scene before cutting to black. This was incredibly poignant, I thought, as it revealed not only a glimpse of humanity of the child, but also a minor underlying theme of parental influence. While this may or may not have been intentional, it was certainly present and gives to the film a greater impact, casting off any notion of it as a one-off horror film designed to make the audience cringe.

In viewing the film I found many similarities to The Descent, namely the point in the film where Jenny decides to cast off her timid shell and fight back. While both carry a survivalist theme, the main female characters in either film experience the manifestation of the latent survival instinct inherent in everyone long after the death of their companion(s). This serves as a standard cliché, however, for many films in the survivalist genre, a notable exception being Ils, which features lots and lots of running and hiding. Further comparisons between the two films are more stylistic than anything. The music was eerily similar, as was the scene in which one of the children gets a makeshift shiv through the neck, the result of Jenny’s sanity slowly unraveling. This death, however, is related, however tenuous, to Jenny’s ultimate downfall, just as Beth’s death in The Descent is partially related to the downfall of Juno. This review doesn’t do it justice, so see both films and you’ll understand where I’m coming from.

Survival horror can be a problem for some. While I believe that this subgenre of horror has the highest amount of potential for genuine %$%*@-upness, it also has a predisposition for unoriginality. This isn’t that big of an issue, especially with me, as expecting originality in a horror film is like expecting a p*rno film to have a compelling plot and solid acting. All films, no matter how ridiculous and derivative they may seem have the potential to be an excellent film. EdenLakeis no exception. Watkins has crafted a relatively solid thriller, and though not without its problems, manages to deliver on his freshman debut as director.