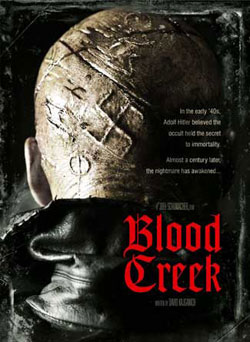 A struggling, German, immigrant family in West Virginia, in the early 1930’s, receives a letter from the Reich that they will be paid for housing a Nazi scholar Richard Wirth, (Michael Fassbender) while he conducts research. This being the Dust-Bowl/Great Depression era the impoverished family reluctantly accepts the man into their home. Once there, he inquires about an ancient stone, a runestone found by the family years earlier. He says the stone, and others like it, were left by Germany’s Nordic ancestors and that the runes will lead to immortality and therefore will help Nazi world domination. 70 years later, in the present, Evan Marshall (Henry Cavill) an EMT cares for his sick father and his brother’s family. His brother (Dominic Purcell) an Iraq War vet who made it back home, suddenly went missing two years ago. One night Evan is awakened by the reappearance of his brother who says he has been held captive and demands Evan grab as many guns as he can and not ask any questions. Dominic leads his brother to the farmhouse, now even more dilapidated and covered in strange occult symbols, and — the family hasn’t aged since WW II. At the house the usual escalation happens resulting in violence and mayhem not to mention back to a now twisted and unrecognizable Wirth, whom the family has been keeping trapped and contained on their land, until the brothers come and mess everything up. At this point the movie takes off and switches gears from being a revenge flick to a survival film as the Purcell and his brother are trapped inside the house with the ageless family while the blood drinking, demonic, Nazi super soldier tries to pick off the cast one-by-one.

Ultimately, the story ends with a genuinely bittersweet moment and with an effectively tantalizing set up for other sequels that I’m actually sorry will never be made.

Every once in a while, I hear about a movie and the premise just tickles all the right fanboy sensibilities and it makes me just plain giddy. Like when I heard a “serious” Watchmen movie was coming out, or the first rumors about Cloverfield, and the wave of elation at the prospect of a real, true Monster movie (Voltron… really?). Usually, this happens over time, as cast and director rumors fly around and then the odd photo leaks out and then a teaser and on and on. Well, a whirlwind of seemingly unrelated activity joined together and afforded me the opportunity to see Joel Schumacher’s latest flick Blood Creek today, and despite the odds, in less than 24 hours hemade me remember that feeling.

Now that feeling isn’t always the best indicator as to whether I’m gonna get a great, groundbreaking film or even a good film, frankly both Watchmen and Cloverfield are hotly debated and fan reactions vary widely. Some say they are both great films and others say they both fell short. In these days of DTV and Network MOW’s all too often I, as a genre fan, can feel strongly about the potential behind an idea, ready to give the benefit of a doubt, and find myself unfortunately let down at the execution. Well, Schumacher’s “latest” flick, a Nazi-occult-horror film!?falls somewhere in between. (sigh) Okay, you had me at Nazi-occult. 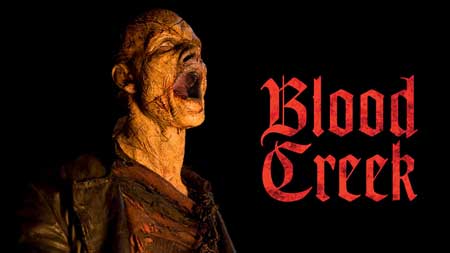 Earlier today, not an hour after being mesmerized by a History channel show on The Knight’s Templar in America and the true-life discovery of ancient rune stones found here in America, I happened to stumble upon a story that made mention of a practically secret release of a Joel Schumacher directed film that just so happens to be based on the very same rune stones I had just heard of for the first time. Except, Schumacher went even further and added the eternally creepy, and also true to life, Nazi obsession with mysticism. Not only that, my hometown, Orlando, is one of the few, very very few, cities across the country that is seeing a limited release of this film. Essentially, Blood Creek has been in the can for over a year, gathering dust on the shelf and has now been relegated to said very, very limited release in second run theatres. “Second run” being code for the dollar theatre (who doesn’t love a bargain, right?) and even then in only a few cities. So, here I was intrigued by the new, and seemingly rich, mythology of theses American rune stones and emboldened by the fortuitous nature my geographical proximity afforded me. Surely, it was a sign.

Previously known on LionsGate’s roster as Creek, and Town Creek before that, the film deals with some pretty ideal subject matter for a horror film. Namely, Nazi Occultism, raising the dead and Dominic Purcell. Seriously, he should be crowned the king of DTV or at least of the Afterdark Horrorfest. Also, the script by Dave Kajanich (The Invasion) is said to have been pretty good. But the film does have some pacing/editing issues and at time seems oddly expositional. It’s as if you can hear Schumacher saying, “they’re coming to shut us down right now, we have one take left, explain the plot in one scene… Action!” To be fair, this is not a big budget, polished affair. 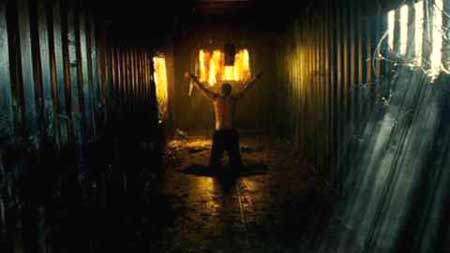 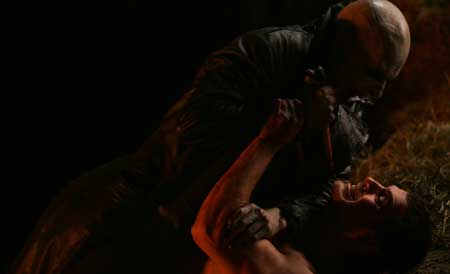 In fact it has the most economical production I’ve ever seen in a Schumacher film and definitely showcases some of his edgier tastes last seen in the competent Jim Carrey led Number 23. If you’re a fan of Joel Schumacher’s genre work you won’t be disappointed. You may not get the same cerebral thrill you did from Flatliners or the dark fun of The Lost Boys but Blood Creek has set a new mark in Schumacher’s horror repertoire. Bottom line, this is a whole new side of Joel Schumacher, and I like it. Despite its flaws, Blood Creek is dark, intriguing, energetic and at times brutal. A lot like the movie industry itself, I suppose. See you at the dollar theatre!