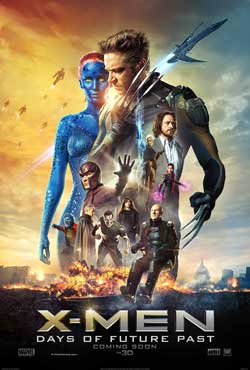 The ultimate X-Men ensemble fights a war for the survival of the species across two time periods. The X-Men join forces with their younger selves in an epic battle that must change the past – to save our future by sending Wolverine to change history and prevent an event that results in doom for both humans and mutants.

It’s been my misfortune to have seen a plethora of films that utilize time travel as a central conceit to their plots. I use the word “Misfortune” because (With a few notable exceptions to be discussed later), they basically all sucked to varying degrees. It’s pretty hard to maintain logic when you’re dealing with time travel in film or TV for that matter since eventually the script runs itself into a corner that it just can’t figure a sensible way out of. And when that happens, all logic is tossed out the window and all loose ends are either unsatisfactorily explained or just left there to dangle in the hopes that no one will notice. Director Bryan Singer’s return to the X-Men franchise he kicked off 14 years ago not only utilizes time travel as the motivating force behind it’s script (By Simon Kinberg), it just happens to feature a gargantuan cast. The combination of the two are pretty much a guarantee for a disaster of epic proportions (Toss in an estimated $200 million dollar budget for good measure), but despite a few minor hiccups – X-Men: Days Of Future Past is the best superhero flick I’ve seen this year and easily one of the best films of the year. 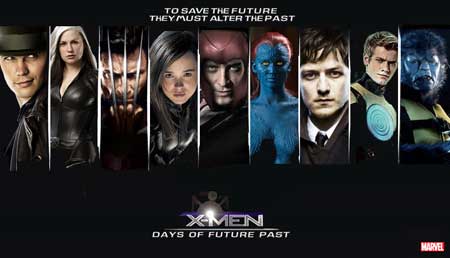 In the not too distant future, man made robots called Sentinels are waging war against mutants, and the Sentinels are winning. Charles Xavier (Patrick Stewart) & Magneto (Ian McKellen) have joined forces in one final attempt to thwart the oncoming wave of sentinels headed to eradicate them by using Kitty Pryde (Ellen Page) and her unique power to send Wolverine’s (Hugh Jackman) conscience back to the year 1973, where he must find a way to stop Raven/Mystique (Jennifer Lawrence) from assassinating Dr. Bolivar Trask (Peter Dinklage). Dr. Trask is the man who created the Sentinels and she believes that killing him will prevent them from ever being fully realized, but what she doesn’t know is that once she succeeds, she’ll be captured and her unique DNA will be used to continue development of the Sentinel program & they will eventually become the unstoppable death machines that will waylay both mutants & homosapiens in the future. But in order to succeed, Logan has to convince a young Xavier (James McAvoy), Hank/Beast (Nicholas Hoult) & Magneto (Michael Fassbender) that he isn’t just a crazy person claiming he’s from the future. But Xavier has become a drug addled recluse being tended to by Hank and Magneto is in jail for assassinating a major political figure.

Didja get all of that? 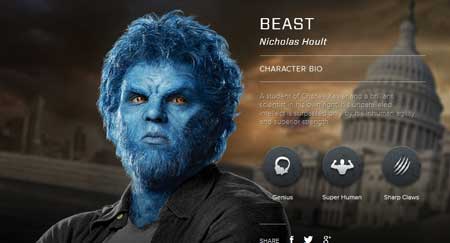 The film opens with a shot straight out of Cameron’s “The Terminator” (1984), displaying a cityscape that’s been wiped out entirely. Dark skies, fires & human remains strewn across the ground all portend to a disastrous war that was fought (& lost) by both mutants & humans. In the midst of all of this, we’re reintroduced to Xavier, Magneto & company, who are locked away in an underground bunker and fighting a battle against ever encroaching sentinels. Among the mutants standing with Xavier & Magneto are Kitty Pryde, Iceman (Shawn Ashmore), Colossus (Daniel Cudmore), Sunspot (Adam Canto), Warpath (Booboo Stewart), Blink (Bingbing Fan) & Bishop (Omar Sy). Coming to their aid in the X-Men Quinjet are Wolverine & Storm (Halle Berry) and the ensuing battle is a special effects bonanza that would be a fitting scene for the end of a big budget action movie but this all happens in the first ten minutes! It’s a truly spectacular opening and although the film can’t maintain the all out intensity of its opening battle, it does a great job of keeping its audience fully invested in the story of how the X-Men ended up in this predicament.

Once the main plotline is set in motion and Logan (Or rather, his conscience) is sent back to 1973 to seek out young Xavier, Magneto & Mystique, the film settles into its story quite nicely. Although it might seem like Wolverine is the main man here, in actuality he’s just part of the ensemble and effectively fades into the background when appropriate to give someone else some face time. Jackman looks a lot leaner here than in previous entries, but just as menacing & intimidating as ever. McAvoy gives the film’s best performance as young Xavier, his introduction scene is especially intense with him living in squalor much like a mutant Howard Hughes, hopelessly addicted to a serum (Created by Hank) that gives him the use of his legs at the cost of the loss of his mental powers. Scenes of him with a tourniquet around his arm as he shoots up in his disheveled room are meant to evoke the state of hopelessly addicted heroin addicts and echo scenes from films like “The Panic In Needle Park” (1970). Fassbender affords Magneto a calm exterior that belies the fury of a man who yearns to prove to mankind who the dominant race truly is and, later in the film, he gets the chance to show mankind exactly how superior mutants are in a spectacularly epic scene during which he uses an entire baseball stadium as both a weapon and an enclosure. 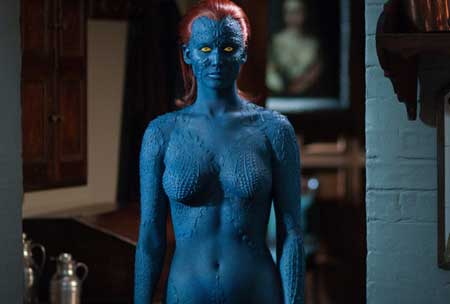 But the lion’s share of the exposition belongs to Lawrence & Mystique. While Mystique has been portrayed as an out & out villain in other X films, here she’s seemingly undecided as to which way she’s going. She hasn’t yet committed to partnering with Magneto yet and her inner struggle to do what’s right for mutants and what’s right for humanity is right there on her sleeve for all to see, she gives a wonderfully nuanced and dramatic performance here. Another mutant makes his debut here as well with Quicksilver (Evan Peters) getting a few moments to shine in the spotlight. He becomes part of Wolverine’s posse back in 1973 and although still just a teenager, he’s very engaging and very comfortable with his mutant ability (Super Speed). There’s one hilarious, but exciting scene in which the film slows down to show how he can disarm a group of armed soldiers who’ve just fired their weapons all to the tune of Jim Croce’s “Time In A Bottle”. Peter Dinklage plays Trask and while he gives a good performance, there doesn’t seem to be enough of him in the film to warrant him being cast as the main villain. There’s another villain here as well but I can’t divulge his identity. Suffice it to say that he’s in a previous X film as the main villain. Sadly, both Berry & Sy basically have extended cameos in the film and (Especially in the case of Sy & his character, Bishop), this is a shame. 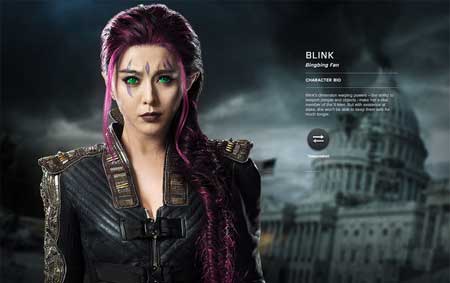 The script is deadly serious and at times quite emotional & violent but it has moments of levity that subtly nudge the characters into giving the audience a wink. The idea of being sent to the past by someone to confront that same person when he was younger is straight out of “The Terminator” & its many sequels but it still stands up although it presents some conundrums. Singer pushes the boundaries of the PG-13 rating with some scenes of various mutants getting torn in half, stabbed & decapitated (!) while battling the Sentinels but while it’s indeed violent, it never feels gratuitous. The idea is that war is indeed violent, so why should the mutants be any different from anyone else when fighting a battle against a bigger, stronger opponent? After all, war is hell. The special effects are of the highest caliber and fully sell the idea of a world populated by both mutants and humans convincingly. The Sentinels looked kinda dodgy in some early pics released by the production, but they’re all kinds of awesome now, they almost seem like angry & malevolent creatures rather than soulless robots on a mission to hunt & destroy. 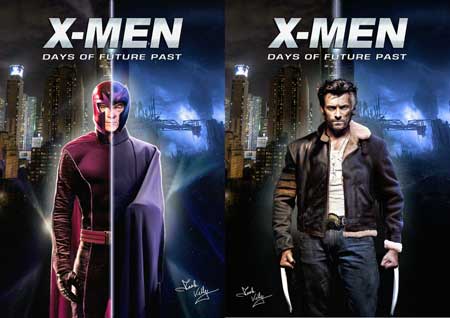 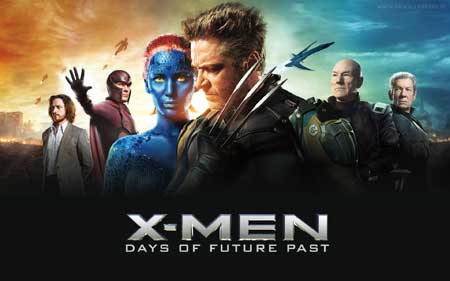 The finale features just about every mutant featured in every X film to date and quite honestly, this film would make a truly fitting finale to the series, but there is a stinger (After the end credits finish so don’t get up!) that promises at least one more X film. But this isn’t a bad thing, Singer has shown that you can indeed come home again and his return to the franchise has produced the best X film to date and maybe the best of all the Marvel films so far. X-Men: Days Of Future Past is one of the most spectacular films I’ve ever seen and it exceeded all of my expectations. It not only delivers action in spades, but it also works on a purely emotional level, a level that’s not par for the course in a film about super powered people wearing tights battling giant robots.