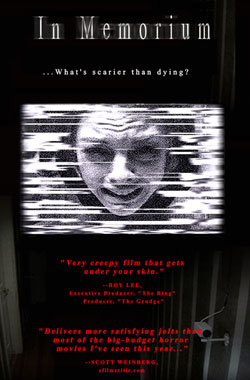 Two months after being diagnosed with terminal cancer, Dennis Wade, a struggling filmmaker, decides to document his illness. Still free from symptoms, he and his girlfriend, Lily, sublet a house and install motion-triggered security cameras throughout.

Two days later…the cameras capture something unsettling: Noises and movement in empty rooms. The next morning, Dennis’ cancer begins to advance at an inexplicable rate.

As Dennis worsens by the day, he and Lily discover the horrific source of the disturbances. With his time running out, they must make a decision: Leave the house and save her life…or stay…and save his.

Somewhere along the road between all the pointless horror films that have been put out over the last few years, a trend started to emerge. Though I can’t say if it is really a trend or just an awareness in filmmakers to capture something truly frightening on tape. I suppose with the public fascination of ghost hunts and supernatural reality shows the awareness has been raised a bit at least into the sense of what we are afraid of, though out of that fear came a new awareness with filmmakers. 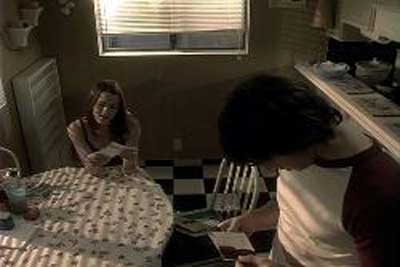 One such film I had the pleasure of watching is a 73 minute film called “In Memorium”. Now keep in mind this is only a week after experiencing the runaway hit “Paranormal Activity” . Though comparisons are inevitable, this film stands strongly on its own merit and approach.

It’s probably fitting that this was the film that I watching as the clock changed over into official Halloween. As “In Memorium” is truly frightening. I believe the product comes from a culture that is coming off of a reality based mind set and a horror wave that for awhile was jarred by wet haired white faced asian girls. Well if that was the trends then the new vision is one of reality fiction. Which is suspending disbelief in a reality basis that is born out of imagination. 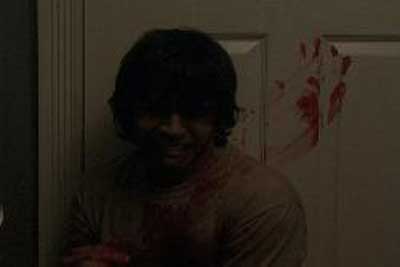 Our film begins with a title card announcing that the events we are about to watch were filmed over the course of Sept 25 thru Oct 1, 2004. The couple Lily and Dennis are moving into a remote rental to….. as he puts it….. film the last days. Dennis has been diagnosed with bone cancer of which he is dying. The proposed treatments were abandoned as they sounded worse than just making the best of it in his current state. Using credit cards, Dennis has equipped his new home with motion sensor cameras in every room. Audio wires run from one room to the next and all is fed into a HD that records the days events. The plan is to document him in his final moments in which will be edited after his death by a prepaid editor.

Everything works as should be until some strange things begin to start to show up in the footage. Not knowing what or whom is causing interference and weird occurrences, they begin to fear the worse as these events increase. Dennis, almost overnight begins to show signs of deterioration and increased sickness. With sores appearing, a pale complexion and occasional spats of vomiting blood….even in his ill state something isn’t right. 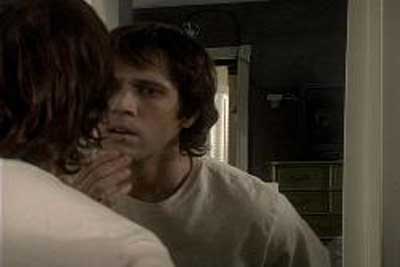 Frank, Dennis’s brother makes occasional visits as the details of their past are disclosed. Stories are exchanged that uncover the controversy surrounding their mother. Meanwhile the 2 deal with an apparent unwelcome spirit that seems to have a purpose in mind. The cameras document everything as it occurs while they begin to feel the effect of something unnatural in their presence.

“In Memorium” combines the best of creepy situations and camera POV’s to create a truly intense atmosphere that gets under your skin almost instantly. For one, the camera setup is brilliantly done as it brings us… the viewers into a engaged state of perspective that feels as if we have shared the experience unfolding. The cameras although statically positioned, blend seamlessly from shot to shot making the whole experience a believable event.

The film features mainly 3 actors Erik McDowell who plays Dennis, Johanna Watts as Lily and Levi Powell as the younger brother Frank. Each contributes a knockout performance that fuels the intensity as it transforms. Director/writer Amanda Gusack has created another chilling entry into the 2009 batch of “get under your skin” cinema presentations that are bound to leave their marks on horror fans worldwide. 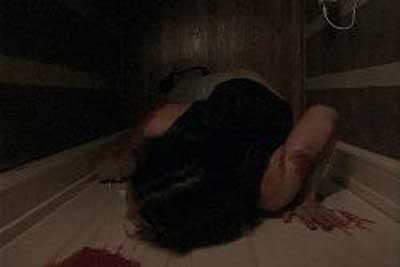 Strangely enough like the case of Paranormal Activity this film also was created a few years back. In fact with a date of 2005, it makes me ask the obvious question of where have these gems been hiding and why have they alluded exposure up till now? “In Memorium” comes highly recommended as a frightening heart racing experience. Perhaps the question has finally been answered as to what makes a horror film scary. Fantastic!