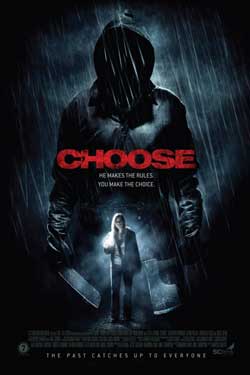 Aspiring journalist Fiona is on the outside looking in of an investigation conducted by her father of a psychopath who is forcing his victims to choose between two different horrific choices. But with the anniversary of her mother’s suicide coming up, the mad man begins to bring her in to the circle, communicating via hints and clues with her directly. What is his motivation for these bizarre and seemingly ruthless crimes, and are they somehow linked to the suicide of Fiona’s mother all those years ago?

Choose is by no means a bad movie. In fact, I rather enjoyed it. The “make a choice” theme behind the villain’s crimes was subtle enough not to resemble anything in the Saw movies, but clever enough to make enough sense within the context of this storyline. As well as Saw, I was reminded of Silence of the Lambs, and Seven. Though this one isn’t at all as good as those films, it had enough positive, story driven elements that warrant the comparison. At its core, Choose is a mystery/ thriller film that scores its points with the questions it poses as you watch. You just know all the principals are involved somehow but the fun is trying to figure out how before the big reveal at the end. I was close but didn’t quite nail it, and that’s why I liked it.

I also liked it because of the acting. Kevin Pollack, the veteran character actor and stand-up comedian who has been in everything from Willow to Usual Suspects and Casino, does a serviceable job in the dual role of sheriff investigating the crimes and father trying to protect his daughter. Bruce Dern, the creepy actor from Tattoo (1981) and my favorite role of his in The Burbs (1989) makes an appearance as the therapist who is ultimately responsible for the modus operandi employed by the killer. But the pleasant surprise to me was Katheryn Winnick’s performance of Fiona, the main protagonist of the film who uses her journalistic skill-set to get to the bottom of what’s going on and why. I’m a huge fan of the television show Bones and she plays Booth’s girlfriend, Hannah (also a journalist, now that I think about it). Winnick is an extremely attractive lady who is reminiscent of Scarlett Johansson in her prettiness, but I think has more chops in the acting arena (no offense Scarlett). I had never seen her in anything prior to Bones, but the difference in these two characters was stark and her portrayal of each equally convincing. I hope she gets more leading roles.

Choose isn’t a movie that’s going to turn a lot of heads, unfortunately, whether it be because of its mundane presentation (it rolls along at a solid clip, but just doesn’t pop like it wants to) or the misplaced casting of Nicholas Tucci as the antagonist. There’s nothing wrong with Tucci’s performance I don’t think, it’s just that I don’t believe he was right for the role. Consequently, his character and his character’s motivations felt out of place at times. When he was menacing it just didn’t fit. I wasn’t afraid of him at all. I was affected by the choices he was making his victims make, but not the way in which he was making them choose. It just didn’t work for me, and I can’t really place my finger on why. I don’t think that was Tucci’s fault though.

Choose to watch Choose or choose not to. If you do, you’ll be impressed with Katheryn Winnick. If you don’t, you can always catch her in Bones.