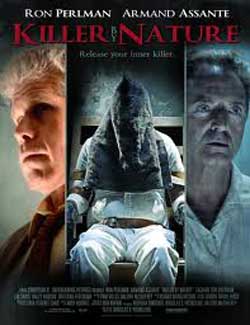 Horrific murders which once lived only in a young man’s nightmares suddenly begin occurring in chilling reality in his hometown.

Nature versus nurture. A debate that has graced numerous horror films in the past and is brought to the forefront once again here. And while the territory of theme is familiar, Killer By Nature manages to keep the viewer entertained.

So is it something in our genes that helps determine whether or not we’ll turn out to be a homicidal killer or will plain old good parenting steer us clear of the dark forces in our minds? Do we really have a choice in the matter? Doctor Julian (played by veteran Ron Perlman) believes it’s all in the genes. He is the foremost expert in dream analysis and sleep disorders, but is on the college lecture circuit addressing the medical and legal implications should the discovery of such a gene ever be found.

Lucky for him there just happens to be a pre-med student named Owen (Zachary Ray Sherman) who is having some very disturbing dreams. Not only that, but he’s sleepwalking as well. It is not uncommon for Owen to wake up terrified and screaming and having no idea how he ended up in his current location. As for his dreams, they might be better described as nightmares as they are murderous in their nature. So when Owen’s current therapist asks Dr. Julian to help her out, he jumps at the chance.

Against this backdrop is the nearing execution of one Doctor Eugene “Mean Gene” Branch (Armand Assante). Seems back in the day the good doctor was himself doing some grotesque experiments into the nature versus nurture debate by, how should I put this, delving into the brains of his patients. In three more days he is set to be executed and the media, along with several protestors and supporters, are grouped outside the prison gates.

As for Owen and Doctor Julian, things seem to be going pretty well. Owen has begun to trust him and is starting to open up more in their sessions. But wouldn’t it figure that a dead body would have to be discovered and mess things up? What is strange is that the murder bears an eerie similarity to the crimes of Mean Gene. Of course he is behind bars. Does Owen have anything to do with this? Perhaps there is a copycat out there?

Killer By Nature is a well-paced movie that has some really good plot twists thrown in for good measure. It’s one of those movies that we’ve all seen before, but that doesn’t keep it from somehow feeling fresh. The clichés are there where they’re supposed to be, but sometimes they are used against the viewer as there are points where you’re not really sure just where this movie is going. It is moments such as these that keep this movie from falling into the usual trappings.

The acting is quite good, but of course it never hurts to have both Ron Perlman and Armand Assante. They instantly give the film some credibility and while neither will be accepting the Oscar for their respective roles, they do a more than decent job. Even Zachary Ray Sherman holds his own as the troubled student. His facial expressions are excellent as the anguish and uncertainty of the events surrounding him unfold. Directing is solid as well and same goes for the script.

I would have to say that this is a movie to see once but I can’t recommend buying it. The premise, while nothing new, does offer a few surprises in its execution. For that the first viewing will be a welcomed experience. I just can’t see the desire to see the film over and over. As far as the debate of nature versus nurture is concerned, don’t expect there to be any answers by the end of the film. Sure it tries to leave you with some food for thought, but it’s nothing that hasn’t been put on the table before.