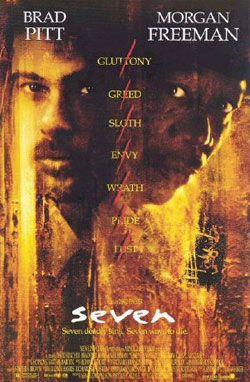 Two homicide detectives are on a desperate hunt for a serial killer (Kevin Spacey) whose crimes are based on the Seven Deadly Sins. The dark and haunting film takes viewers from the tortured remains of one victim to the next. The seasoned Det. Sommerset (Morgan Freeman) researches the Seven Deadly Sins in an effort to get inside the killer’s mind, while his novice hotshot partner, Mills (Brad Pitt), scoffs at his efforts to unravel the case.

Trying to review a film great like Se7en is like trying to tell an audience that’s tasted pizza how great it is. Se7en easily went down in history as one of the most influential thriller horror films of all time. Need clarification? Ok, where do we start? ….. At the time of it’s release corporations, filmmakers and advertisers were looking for some new trend to latch onto. With it’s groundbreaking intro titles, it’s cold and extremely dark story line and its clever kill countdowns plot, Se7en arrived on the scene like an evil phantom that had fans gawking in awe “everywhere”.

It put Kevin Spacey on the map even further than his previous films and sparked a whole slew of copycat films, soundtracks, and rage in Hollywood demanding they all have a cool intro sequence to catapult their films. Heck, in fact it wasn’t shortly after that you’d see truck commercials, adverts and print media’s using this dark textured grunge approach to appeal to a new “hipper” now kind of audience. Yes Se7en arrived and was here to stay as the film that shunned having a lighthearted Hollywood ending.

At the time a talented titles designer named Kyle Cooper was making waves under the umbrella of motion graphics wizards “Imaginary Forces”. This single piece with its clever use of NIN music and jerky, hand done, shaky titles overlaid on jittery images of a serial killer in production had crowds screaming “hell yea” after a cool quick 3 minutes of in your face graphics. The rest played out like a symphony. A cold rainy cut to the chase smattering of scene after scene visits to the handy work of our demented antagonist Kevin Spacey.

It also sent a message to those who still lived in the Leave it to Beaver world for too long, hat “anyone” can take on the profile of a serial killer and commit haneous acts while living among us as plainly as your next door neighbor. These acts which mirrored the seven deadly sins were executed , planned an documented over millions of notebook pages that also introduced another overlooked film asset. The carefully prepared psycho notebooks. This visual piece alone soon started a trend in films such as “The Cell”, “Red Dragon” and “Kiss the Girls” that incorporated some from of scrap book or collage displays.

For more details on this, the special edition DVD actually has a nice piece that goes into he creation process involved with getting a moody authentic looking prop used in the film. But again these are all aspects that make up the whole. Brilliantly played out detective scenes, fantastic production designs, a great on screen repore between Brad Pitt and Morgan Freemen, harrowing FX that only reinforced the less is more factor and a showcase piece for director David Fincher which instantly planted him into the a-list of top directors of all time category.

I would say at this point the only real missing elements that the studios never came out with was a series of books that illustrates and details the production and set props. Funny , you would think that, that would be a given???

To bring the story into focus. It really is a clever but simple story that has the rookie Detective David Mills (Brad Pitt) and the soon to be retired Detective Lt. William Somerset (Morgan Freeman) following up leads on a recent case where an obese man was forced to eat until he suffocated on his own vomit. With a clue left behind containing the word “obesity” written on the wall launched the first of 7 sins to be executed by an unknown perpetrator.

This rather calculating serial mind called himself simply “John Doe”. John was determined to make the unrighteous suffer the fate of seven sins while outsmarting the law enforcement every step of the way. To say the least, many of these scenes are disturbing not only visually but in the stories that follow in how they were performed. Fincher did something that many strive…..To get under the skin of its viewers without having to resort to over the top methods.

As many are familiar with the film, we know that it’s ending is equally as clever as its story. Such as the appearance of Kevin Spacey, the implementation of the last sins and the dark force that is left in its wake. So clever in fact that Spacey had managed to keep out of the promotions and credits so that his appearance when finally revealed was short and powerful.

There is much to this film that has influenced many in the years that followed. Se7en was a single entity. no sequels, no high tech Hollywoodisms and no need for over marketing. I believe it was not one thing but a collection of everything that placed Se7en in the hall of fame of horror thrillers and dark cinema offerings that snuck up on movie goers like a hungry demon.