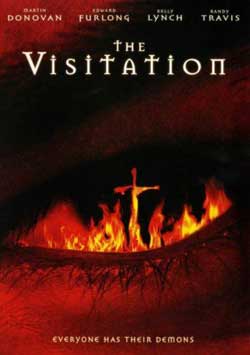 When a mysterious stranger arrives in the sleepy town of Antioch, his ability to perform miracles provokes tension among the locals. Ushering the sick and desperate into his revival tent with a pair of healing hands, he wins dozens of disciples who declare him a prophet. But there are just as many townsfolk who believe him to be a fraud — or even the devil himself. Can a former minister who’s lost his faith sort out the shocking truth?

The Visitation is a 2006 Christian horror film directed by Robby Henson and is based on the Frank Peretti novel of the same name. It’s about a minister (Martin Donovan, who plays Travis Jordan) who abandons his faith after his wife is murdered. After three years of drinking and being depressed he starts to lose his dog. So, he takes him to a vet. (Kelly Lynch, who plays Morgan Elliot. Another note, Morgan’s son was almost killed in a car wreck in the beginning of the film, but he survived. What’s really weird is that a man appears on the scene and then leaves just like that.)

There’s nothing she can do for this dog. Travis decides his dog and seconds later his dog digs himself out. Just as he does, the same man appears and then leaves. Later, strange miracles start happening at the church that Travis used to preach at. Travis and the other ministers of the church, (one of which is country singer Randy Travis, who plays Kyle Sherman) start to grow suspicious.

The “miracles” start at the church with a statue of Jesus. When people touch it, they’re healed. Later, Travis is at a store and sees a man that starts healing people. After Travis sees this, he grabs a reporter and a cop and they’re able to find the guy. He’s a farmer named Brandon Nichols. (Edward Furlong) He touches the cop and heals his tumor. He touches the reporter and takes away her feeling of loneliness. He tries to touch Travis, but he won’t let him.

Word gets out about Brandon and the whole town goes to see him speak at his barn. Kyle confronts him in front of everyone and says that he knows that Brandon is trying to say that he is Jesus. Kyle says that if Brandon really is Jesus, he should show the scars that he had from dying on the cross. He then demands Brandon to show them. When Brandon does show his scars, the crowd screams, “He is Jesus!” Kyle just stands back and refuses to embrace him along with the crowd. Meanwhile, the same man as earlier is still appearing and Travis is trying to find him with the help of Morgan. Not only do they believe that this man had something to do with his wife’s death, but that Brandon does too.

As Christians, we were very moved by this film. (Surprised?) It had a good message about Jesus Christ and about cults. We were also very impressed with the acting. Randy Travis gave a solid performance and Edward Furlong was amazing. You could tell that everyone involved in this really cared about the film and the message that they were sending out.

Possibly the biggest challenge a film has when using Christian themes is how to avoid becoming preachy. The Visitation tackles this issue brilliantly by focusing on the solid story. We don’t need faith explained to us in a movie, and the filmmakers respect us enough to not give us the sermon. They don’t even expect us to agree with them, which makes the film enjoyable for anyone. And again to their credit, the ending is concrete enough to feel satisfying yet ambiguous enough to open a discussion. Bottom line, The Visitation succeeds as a movie with or without the message. And the message succeeds with or without the movie. Bravo.

It is worth noting that the characters in the film are likable, and as the audience we care what happens to them. This is a lesson that way too many horror films seem to have not learned. In The Visitation, we’re not simply rooting for the townsfolk because we’re supposed to, we actually want this to turn out all right. And as Brandon, Edward Furlong demonstrates the perfect blend of mystery and vulnerability. No matter what faith you follow, The Visitation is bound to affect you. We have it in our favorite films category.