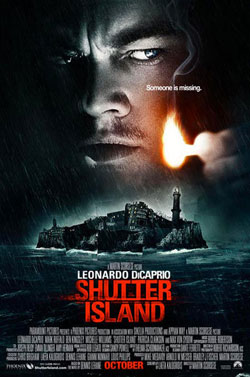 It’s 1954, and up-and-coming U.S. marshal Teddy Daniels is assigned to investigate the disappearance of a patient from Boston’s Shutter Island Ashecliffe Hospital. He’s been pushing for an assignment on the island for personal reasons, but before long he wonders whether he hasn’t been brought there as part of a twisted plot by hospital doctors whose radical treatments range from unethical to illegal to downright sinister. Teddy’s shrewd investigating skills soon provide a promising lead, but the hospital refuses him access to records he suspects would break the case wide open. As a hurricane cuts off communication with the mainland, more dangerous criminals “escape” in the confusion, and the puzzling, improbable clues multiply, Teddy begins to doubt everything – his memory, his partner, even his own sanity.

For all intensive purposes, “Shutter Island” has been marketed as somewhat of a horror film, though for those paying attention at least to its formal classification it falls squarely into a mystery thriller film. Mystery and thriller are a perfect match in this feature which spans a hefty 2 hours and 20 min. Knowing Martin Scorsese’s work is another factor to take into consideration. He has an ability to paint a certain darkness thru expressions, camera work and elongated dramas that feel almost necessary to coincide with his style of filmmaking. How can you recognize his film work you ask?

Very simply ….almost from the get go we get wide pan shots that feel claustrophobic and paranoia inducing at times. As star Leonardo DiCaprio who plays the role of US Marshall Teddy Daniels enters Shutter Island we get nicely placed perspective shots that enhance a certain grandeur and enormity of the location. All this leads to the rather introductory POV of the gates opening and then the magnitude of the Shutter Island facility being shown. To coincide and compliment for that matter we are given close ups and shots of Leonardo DiCaprio that might not be the most complimentary but do emphasized his emotional states. These emotional states are taken further with each act of the script that bounces back and forth with flashbacks of his troubled past.

Shutter Island has Daniels arriving per ferry boat with his newly appointed partner (Mark Ruffalo) Chuck Aule to investigate Shutter Island and the report of a dangerous escaped patient named Rachel who is reported as being missing. His arrival is greeted with cordial but suspicious behavior as he begins to sense a plot of perhaps a deeper secret to the facilities. Dr. Cawley played by Ben Kingsley is the head doctor of the island who explains he has a more humane approach to cure patients than history has in the past. As Daniels and his partner ask questions and investigate more and more they begin to start putting pieces together that points to a secret agenda based on old Nazi experimentation.

This notion and a few clues along the way add to the suspense that carries from start to finish. Though what they didn’t expect was that perhaps a plot within a plot is in action that goes much deeper than their perception. Daniels himself has a range of past that he has to deal with while trying to stay focused on the case. Circumstances begin to connect an instinct that wont let him be even into his dream state. But what Daniels finds is that discovery is a much bigger picture than he anticipated. The closer he gets to the truth, the more his sanity seems to slip away to a conclusion that will pull viewers in and hold them till the end.

“Shutter island” hosts a range of acting talent with includes Max von Sydow, Emily Mortimer, Jackie Earle Haley, Elias Koteas and John Carroll Lynch. Each contributes a role much like a play of characters that Daniels meets along the way. What Scorsese has done is intertwine the facts and fiction to the point of almost inducing a sense of insanity upon the viewer.

Now to clarify would give away the ending though you can expect a certain level of hallucinogenic cinema to both develop the character, aid in the plot and consume the audience at times. With this idea, Shutter may leave a few viewers scratching and perplexed…but to astute viewers you will not only view the mystery tale unveil but almost feel like an active participant at times. Scorsese has creating a winning piece of cinema once again that elevates the film on a whole different level than say a Michael Mann non stop visual smattering. The film has several traits of old style filmmaking that align it with Hitchcockian drama. Shutter Island results in a powerful piece that will leave plenty of room for discussion and reflecting many hours after the film has ended. Chilling and masterful!