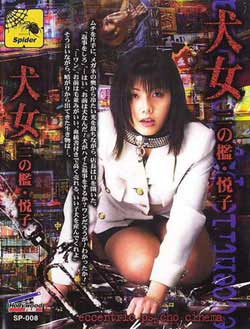 SYNOPSIS from IMDB page:
Ultra-bizarre and sick as hell bondage series focusing more on women abducted by the sadistic sexual psycho and the strange bondage torments they’re forced to endure at his whim.Somewhat creepy in his appearance and mannerisms,the abductor likes to toy with his hostages and leads them to believe they have a chance to escape him–most often as he’s taking a nap–but they find out the hard way he was just playing another game with them and setting them up for a trap–nasty endings!”Eccentric Psycho Cinema” features women being chained up,beaten and sexually mutilated by a crazed male psychopath.If you are a fan of depraved and very sick Japanese bondage p*rn you can’t miss this piece of abnormal filth

If your a frequenter of the underground extreme markets, I’m sure you’ve run across this title name once or twice. “Eccentric Psycho Cinema” is a 7 film endeavor which on many occasions was listed on the most violent movies of all time lists. The collection is in fact very hard to find and is probably best left that way. You’ll find some of these renamed and circulating under those names for instance #1 is also known as “Bottled Vulva: Bank Teller”. Though I think the general series is best left as a set in itself.

Really as far as cinema goes your really not missing out on much if this never crosses your TV tray. In simple form, the movies run about 90 minutes each which should have been left to 15 minutes each. At the time of reviewing these…. I am reviewing these without subtitles so some of the narrative however ….useful it may be… was lost. Though to sum up things, a 20 something business man invites ladies back to his apartment. (about 1 per film) After wining and dining them he works his way into grabbing them, shackling them and then begins his so called process.

This process usually involves some undressing meant to be exotic but weak in his technique followed by teasing and eventually foreplay. Shackles, bondage gear and torture situations varies from film to film. But its nothing really all that new and is certainly stretched out way too long. I got thru these by hitting fast forward most of the time thru the slow parts. The bondage p*rn ramps up usually at the end of the film where he performs more atrocious acts. The problem here is that the editing was so bad that it felt like they got the cuts mixed up at times. For instance, in the first film he undresses the lady, teases her then re-dresses her and then starts to tear her clothes off again. Was all that necessary? I didn’t think so. There is no storyline, each is set up as a means to the end. Which in the end scenes, usually ends with him cutting off there vaginas and placing them into a glass jar. Oh ya, they barely scream during it and he holds it in their faces for 3 minutes so they see what he’s done. Boring!

A few times it looks like he grabs some hamburger meat and smears it on them for kicks…why, um…not so sure??

The 2nd entry he places his victim in a bondage contraption and proceeds to shove a pipe in her twat. This is after abusing her for awhile with a wine bottle (use your imagination). The tube is lifted as a lizard is placed in and forced toward her crotch. It played out pretty unconvincing as the shots are somewhat hidden. For kicks he also swings her into a knife edged pipe a few times for maximum effect. All in all its 100% exploitation and nothing else. This Asian release is weakened by the actress’s poor performances which at times seems like they are bored with his hi jinx as well. After getting thru 2, I think I was more disappointed that I had 5 more to go.

I found this little short description on the Internet which also might help shed some light per
www.variedcelluloid.net/forum/viewtopic.php?f=1&t=204 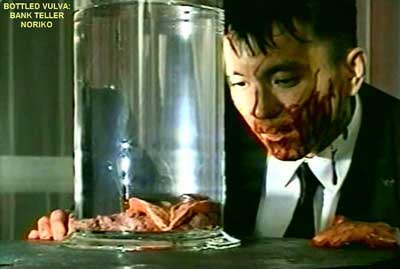 In the tradition of sick jpn. Videos like guinea pig and nikkatsu rape and sm films comes this ultra depraved new series from 2001 featuring women being chained up, beaten, and then sexually mutilated by a crazed male psychopath the females clitoris is then kept as a souvenir yes, its carved out and removed with a huge knife in graphic detail its then put in a jar to be preserved next to the other ones hes kept gross, bloody, and sick as hell, this is one jpn. Video you wont soon forget.

Even more from this shocking and gross series from japan the same psycho goes about finding more women victims (and vaginas) to add to his rising collection he chains them up, tortures them, whips them, then does his thing he even violates this woman with a wine bottle surprisingly, There’s a minimal of optical censoring on these videos, and you can see right thru what is there, so its not a problem.

Yet another in this grotesque japan. Sm torture series, this time we have a different guy psycho torturing a kidnapped airline stewardess (this dudes a real nut, too), in various sadistic and vile ways. He even uses a toy airplane to torment her with he finally takes a box cutter and rams it full force between her legs, blood spraying her chest and stomach in a sickeningly bloody scene you then get to see the geek holding the cut off vagina in his hands in gory detail need I say more.

If you get the basic message here it’s hardcore Japanese extreme bondage with a touch of torture, bloodletting, gore and fetish play. Really some present themselves better than others in the series. In fact at times, the actor appears to just be mentally challenged without purpose. A few are different in the fact that they exist mainly for just fetish bondage torture play. The 4th entry begins with the tormentor asking the captive to spread her legs as he then proceeds to urinate “into” it. Oral sex followed by bondage scenarios and some heavy whipping. It gets inventive from their with new bondage scenarios. Since all of these are full cinema length I’m guessing many won’t make it thru all 7 before chucking this one into the “seen it” pile. 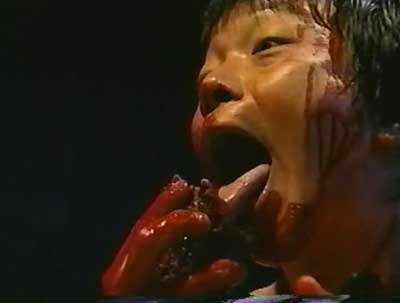 A common factor in most of these is an ending with the captives poontang being cut off and jarred. ya, quality cinema here……..

The series was directed by Shinji Imaoka and exists for the purpose of pure exploitation, sick minded torture and what not. Give it a go if that’s how you roll. The series offers nothing of value besides pure shock.