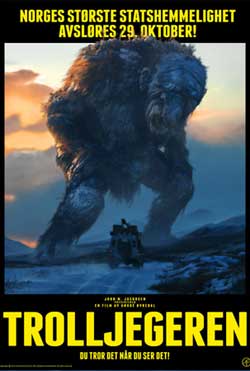 A group of three college filmmakers set out to investigate what appears to be an illegal bear hunting situation in the mountains and forests of Norway. What they discover instead is the gruff but quiet hunter Hans who reluctantly acquiesces to their accompanying him as he hunts something far more unlikely…and far more dangerous.

I love foreign films. I specifically love foreign horror films. Some people are put off immediately at the thought of having to read subtitles, and that is nothing less than a travesty. I love to see how human nature is consistent across vastly different cultures and foreign films are the best way for me to experience that. I also love films shot in the cinema verite, (real-life, documentary) style. Some avoid these movies as well, citing the “shakiness” of the camera work as being too distracting. This is also a shame as there have been a number of excellent films made in this way that unfortunately will never be seen by people who might otherwise enjoy them; had they only been shot with a Steadi-cam instead. It’s like my mother, who, though a huge movie fan, won’t ever watch “Tombstone” or “Silverado” because she, “just doesn’t like Westerns”. Pity.

Ever since “The Blair Witch Project” came out in 1999, the cinema verite style has become almost vogue. It’s been done to varying degrees of success over the years, with “[rec]” by far being my favorite (go figure, both foreign AND documentary style). The Troll Hunter is the next entry in the genre, and is not only a respectable representation of the style, but also a fun and intriguing glimpse into Norwegian folklore.

The film starts off almost exactly like “Blair Witch”, both in setting and premise: mysterious footage found in the mountains of three young college filmmakers, two of them guys, the other a girl with nothing but a camera and a boom mic out to film a story in the forest. The story they’re scooping is the illegal bear poaching but they discover something else entirely. They run into a grizzled veteran hunter named Hans who isn’t the poacher they’d initially thought he was, but instead is an agent for the TSS, the Troll Security Service. The TSS is a secret government organization in place to regulate and control the troll population throughout the Norwegian countryside while trying to remain unknown to the general public. Yes, like “Men in Black”, but with trolls.

And who knew there were so many types of trolls? There’s the Raglefant, the Tusseladd, the Rimtusse, the Dovregubben, the Harding, and the daddy of them all the Jotne. Now, these trolls don’t have the fierce appearance of the Cave Troll in “Fellowship of the Ring”, nor do they have the cuddly appeal of the ones on my boss’s desk. They fall somewhere in between. They most assuredly have a nasty temperament (and odor) but kind of look like the old man in Metallica’s “Unforgiven” video, with huge, dangling, Jimmy Durante like noses. Oh, and they’re big.

With all that said, you may think that this movie is a farce, and while there were some funny moments, it actually, and successfully I might add, comes across as a serious effort. I found myself really looking forward to seeing the next troll, because, regardless of the fact that they didn’t necessarily fit the bill of what Hollywood tells me is scary, they were still tenacious and menacing, were represented with excellent visual effects, and remained true to the folk lore of the region. The story too was surprisingly present, and while I think making the TSS more of a government entity rather than a fish and game agency would have lent more coherency and creepiness to the rather ambiguous ending, I really enjoyed the film from beginning to end.

So, if you can handle reading subtitles (and if you can’t, you should try a little harder), and you dig the documentary style of filmmaking, you should definitely check out The Troll Hunter. It’s a good time and you’ll be able to add it to your list of foreign films that you’ve seen, and hopefully, enjoyed.

Troll Hunter is now available from Magnolia Entertainment on Blu-ray