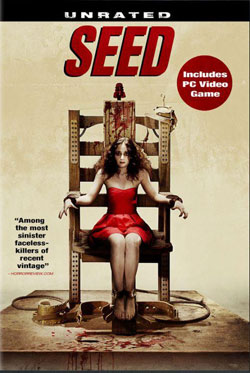 After two failed attempts to execute him in the electric chair, the still-breathing killer Max Seed (Will Sanderson) is declared dead, tied up and buried alive. After fighting his way out of his restraints to emerge from his grave, Seed goes on a blood-soaked rampage of vengeance against the people who put him there. Michael Paré co-stars in director Uwe Boll’s uncompromising vision of retribution, inspired by true events.

“For everything that rises is worth destroying”

For those who’ve done their homework, already know that “Seed” is a nasty film. We’ll get into that here as well, though at the core of this disturbing piece of cinema is a plain and obvious message. That humanity is darker than any serial killer we can drum up.

A film that has received a fair amount of coverage from the footage it shows, also attempts to combine our familiar iconic horror villains into an equally brutal masked character that has been named Max Seed. Seed, as they call him is responsible for so many murders that he is easily at the frontline of on-screen serial killers. With a body count of 666 it’s almost too clever for film, but it is what it is. The newspaper clippings reveal that he committed 666 murders in 6 years and is formally known as the “Sufferton Killer” (pure fiction of course). The film focuses on painting a picture of a darker image serial killer than his predecessors. Inspired by dark acts to commit dark acts. A hooded masked killer that lurks within the crevices of humanity and kills without mercy.

At the show’s start, we are subjected to “actual” footage (also noted in the title credits) of several animals being beaten to death. Where the footage came from or why, is not the question but that it’s horrifying as anything to sit and watch knowing its “not” props. The perpetrators are foreign which means it probably is some underground bootleg that was acquired.

Seed stands and watches the TV as this plays out in front of him. The scene suggests an evil that comes from reality and is influencing our on screen villain. Seed, as mentioned before takes on a few iconic personas of Leatherface, Jason and Myers combined. Like them, he never speaks and goes around inflicting cruelty, torture, and acts of violence.

The cause? We never really get any answers but the film suggests that the world’s evil has a portion in his making. The fun doesn’t stop there as the law officials acquire footage they have to endure with scenes of starving to death torture. Wecassume that its footage from Seed, but that fact is a little unclear (at first). In any case I hope these scenes were staged as they show the slow deaths of first a rat, a dog, a baby and then a woman who starves into decay.

Not something you want to take away in your after thoughts.

Bishop played by the Michael Pare (Eddie and the Cruisers) is our good cop struggling-with-it-all-hero of the film. He does catch the bad guys, but seems to at a price of his slow decline of morality and emotional construct. Seen drinking, watching, crying, sweating and losing it in the process suggests that Bishop is on his way to a near mental breakdown from job stress (if not already).

A dedicated cop, he is at constant war with his conscience and his job. He happens to be good at what he does so that force drives him on. When he catches Seed, it’s not too long after that Seed is brought before the electric chair for his death penalty. The state says that they can only electrocute a man so many times before they have to let him go (that is if he still survives). Well it’s not hard to guess that our super villain shows vital signs after his electrocution and puts the officers in a difficult decision. This decision includes burying Seed alive assuming that he’s brain dead and blind. The music, the expressions and the acts almost try and direct the audience to a form of compassion for this madman, as he’s lowered into the earth. As one prisoner mentions in passing “Karma is a bad thing”.

The act itself adds a bit of injustice in the presentation of the law official’s moral. Which says in an all too quiet tone, ……..man is indeed cruel, whatever side he serves.

If you can believe it, the film actually contains some progressively worse acts of violence. The one that stands out to me the most is an old lady who is bound to chair and continually hit in the head with the weighted part of an axe. Seed toys with her in small blows that increase slightly with each whack. The horror comes in the form of the length of the segment that continues from a static camera angle as he beats her to death one blow at a time. No cutaways, no time lapses, no change of perspectives. Cleverly done, the camera never moves which suggests high points of the FX team that pulled this one off. Assumed to be part CGI, it still works as an effective visual portion of the film that is trying to indulge viewers into extreme brutality.

In summary, the film is an extremely dark film, that doesn’t aim to satisfy any human need for resolution or justice. The outcome will further that remark, however this film was created with the intention of dark outcomes from start to finish. In that sense it does abandon many cliques, but also at the cost of leaving your audience with a very harrowing experience. Visual assault and mental assault is the resolution here, so keep that in mind.

From the review you already know what your getting into. So I say approach this one with caution, it’s not for weak hearts and weak minds. You might formulate your own messege from this film, or you might just brush it off as another extreme exploit of violence.

Either or it suggests the state of horror audiences who show no signs of slowing up on films of this nature. Directed & written by Uwe Boll it does show a level of maturity in his ability as a director. The content may be as hard as it comes but it definitively raises the bar on past flops of his such as “House of the Dead”, and “Alone in the Dark”

Final note: The included footage that the film has incorporated is very much in line with reality “Faces of Death” type stuff. So don’t say I didn’t warn you.