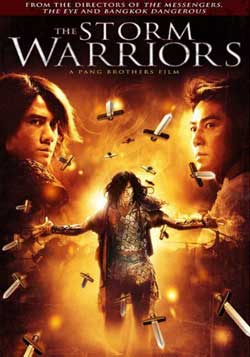 Wind and Cloud find themselves up against a ruthless Japanese warlord intent on invading China.

Wow, it looks like the Asian films are really taking an example from successful american-made movies. Or was it the other way around? In any case, The Storm Warriors really brings a sense of the crazy character-based retro style from earlier Asian films combined with the power of new styles like “300”

Though most of you will make the “somewhat” connection association with the recent film “Last Air Bender. Though I really want to be clear that the origins of this style is no Air bender material. To round up my impression right from the get-go, this is a topnotch visual feast with alot of martial arts play going on in between. Maybe even a hint of “Mortal Combat” thrown in for good measure. But of course you’ll want to know what is all the hoopla, so lets get to the heart of this one.

Lord Godless, an evil Japanese warlord proves to be relentless in wanting to conquer China. As we begin, a major confrontation is about to begin. It seems he has taken the emperor captive while subduing a large number of marital arts wizards (under the trickery of poison that left them disabled long enough to get captured). Much of them possess certain powers that have been acquired as a result of their training mastery. For instance, Wind is able to control the air around him.

As they are given a choice between serving Godless or dying, they manage to break free from their chains per the help of a loyal servant. Though this proves to be futile as Godless easily conquers each one single handed. Nameless, one of the more stronger martial wizards, launches several swords in a massive animated attack. Though Wind and Cloud prove to be ineffective in their attacks. Nameless injured from not being able to direct all his energy due to the poison fails in his full attack which leaves him with internal injuries. Cloud, Wind and Chu Chu are able to escape so that they can seek out greater help and training. This help they find in the recommendation of one Lord Wicked, a powerful martial artist who once was unstoppable due to evil powers consuming him. He has since returned to a cave and self dismembered his arms to prevent any more bloodshed on his part. It is here that Wind is taken in to undergo more intense training. Though as it’s told he must embrace the evil to gain such abilities in a short amount of time. In the background, Lord Godless has set out to acquire the famed Dragon bone that contains the secret that deals with the destiny of China.This object is hidden well within a remote location called the dragon tomb. The location of the bone is deeply buried within.

As you can imagine the film takes on the traditional role of good vs evil and a climax to confrontations. During this time, each battles all sorts of lackeys, and evil minions while also fine tuning their own strengths. The battles are enhanced with great special fx that really take on the advantage of CGI trickery and elemental magic. This treatment is where the “Mortal Combat” reference comes in. The score is solid and very mood appropriate but also at times may bring on a lethargic sense especially during dramatic historical moments. Though even with that sense, it best to keep watching as this is one very cool looking film. The intro credits alone mimic some familiar styles but also take advantage of a truly dynamic motion and 3D space intro. “300”-esque? a bit, but that’s ok as its highly effective in presentation. I’d love to see the Asian trends take more advantage of this look and feel especially in use towards different genres. The package has a huge block buster feel that should be rewared on that merit alone.

The movie like several of these style films is based on traditional story arcs that revolve around the battles of China. The Storm Warriors is another extremely strong entry from the Pang brothers Danny and Oxide who brang us so many other great accomplishments. This release while released in full Cantonese and Mandarin languages also comes dubbed with an English audio track that is equally effective.

IMDB features one trivia piece that I though worth including:
The animated opening sequence actually pays homage to many famous cover arts of the Fung Wen comics which the movie Storm Warriors was based on. Examples are: Evil Wind sitting in front of his Blizzard Blade(Issue#85) Lord Godless bursting in the town gate (Issue#79), Cloud picking the one true Ulimate Sword from the countless Ultimate Swords in the Sword Sacrificial Event(Issue#46), Evil Wind facing behind with the Dragon Spine tied to his back while holding his broken Blizzard Blade(Issue#109), etc 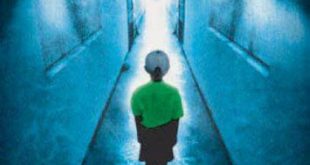 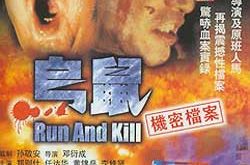