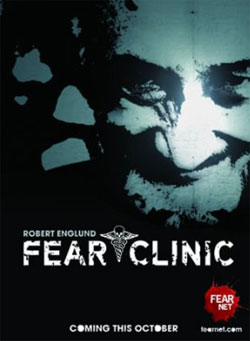 Five young adults travel to a special clinic run by the infamous Dr. Andover to treat their phobias. One by one their worst fears begin to manifest themselves and intrude into each patient’s reality. Is Dr. Andover’s cure worse than the disease?

Fear Clinic, the break thru horror series for the Fear.net network was both a surprise and a disappointment….but wait, don’t turn the page just quite yet as we get into details. With dynamically appropriate actor Robert Englund leading the crew, the film also features former Friday the 13th Jason, Kane Hodder as Villatoro with Lisa Wilcox who you all might remember from the “Nightmare of Elm Street 4” movie.

Robert Englund plays the role of Dr. Andover who runs a special clinic that deals with treating extreme cases on battling their fears. In a tip of the hat sense, the treatments almost mirror a Freddy like environment in where the subjects go under treatment they enter an almost nightmarish dream state. This fact is the best and sometimes the most confusing aspect.

The subjects who suffer from a range of disorders such as Claustrophobia, Entomophobia, Hydrophobia, Misophobia and Scotophobia are treated per a sleep chamber box. They are injected with drugs to battle nightmare experiences while laying within the box. The hallucinations are really scary and well done. In fact its apparent from these episodes that the filmmakers had a pretty decent budget allocated to the project as each patient undergoes a different scenario that has them battling their worst fears in the worst possible ways.

The notion that becomes confusing is when the reality and dreamlike states start to mix. We are told that the fears are starting to emerge into reality though we aren’t really sure if they are speaking from reality. The hallucinations are real to the patients and at other times seem to be existing in the physical world. The effect needs some clarification as that aspect can get frustrating.

Because the show is broken up into series the action and visuals are always pretty active. Each episode is offered online for free viewing from Fear.net which lasts I believe 5-10 minutes each. With 5 episodes the whole series clocks in at about 30 -45 minutes…..hard to tell. Now with a production that seems really well done, this would in fact make for a great feature release, though they would of course need to up the timeline to at least 90 minutes. With the current state we get all the good stuff with no lag time but the product as a whole is too short. There is also an issue with the technology in which the episodes would skip, freeze and jerk as they struggle to play online. This aspect I’m sure is frustrating to most viewers.

To skip back to the FX, there is some wild stuff in this series that really makes for a top notch production. Englund is a shoe-in for the part as a sometimes deranged doctor with a plan and Hodder is easily the rough neck lackey who we all love to hate. Each episode wastes no time into getting into some pretty freaky horror such as bugs emerging from skin, a germaphobe who morphs into an outbreak of viral sludge and a darkness fearing patient who visualizes all kinds of demons and phantoms emerging from dark places.

Where we lose ground in this series is the buildup, the backgrounds, the character builds and the resolution. If this were to become a film release I would hope that all that would be added to give the series a proper story build. Alot of these elements makes Fear clinic a potential winner with the right work added to it.

The series is directed by Robert Hall who I confess to really liking his work in the Fx arena. Previous efforts such as “Red Sands”, “Room 6”, “Quarantine” and “Killer pad” are all shelf stockers for me. You might recognize his directing work from the previous “Laid to Rest”.

Fear.net is really on to something with this series. 5 episodes seems to be the extent of the project, it would be a waste not to see it carried forward in an exciting way. Much like the experimental TV series “Sanctuary”….maybe we can look forward to more of this in the future… time will tell.