SYNOPSIS:
After giving his life to cinema as a projectionist, Stuart is left to work the remainder of his career as a concession attendant, biding his time until retirement. Bitter, he plots an intricate revenge scheme against his manager and a pair of lovers locked in the theater after hours.

REVIEW:
Starring the ever popular Robert Englund in a terrific role for the horror icon, The Last Showing is a fantastic but stilted film that lumbers more than it leaps. Phil Hawkins serves as both writer and director with a script that serves up an interesting premise where an antiquated and frustrated projectionist sets out to film a horror film with those left in the theater late one night. The film follows as each of his plot riddled index cards reveals twist and turns and manipulations with glee and relish. The film promises a great deal but never lives up to its own ideals limping along. It does have a few highlights, all involving its star, and a satisfying conclusion that will likely leave its audience more fulfilled than disappointed. For most, a great cast and a favorable premise win the day. 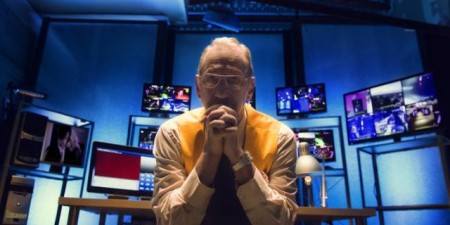 The script for The Last Showing skirts around the effects of the modernization of cinemas has upon its antagonist, Stuart (Englund), only teasing and insinuating that he is no longer a valued employee and that his skill set is antiquated. Even so the film continues as if this sketch of his character is enough to have the audience identify with his situation. It is enough to propel the story, but not enough to engage fully, which is a shame. The script concentrates on Stuart’s elaborate plan and its execution as Martin (Jones), Allie (Berrington) and Clive (Kirby) are manipulated and toyed with. The script also takes a variety of liberties to ensure that the only persons left in the theaters are our small cast. Then the film becomes a modern version of Theater of Blood (1974) without the imagination.

The film is elevated greatly by the presence of horror legend and modern genre icon Robert Englund as Stuart the demented projectionist. He bring a great deal of empathy for the character’s plight and gives the character a lot more depth than the dialog or action suggests. He dives into the role giving a terrific performance far removed from his Freddy Krueger. He is fascinating to watch even in the most stagnant scenes. His best scenes are with Emily Berrington who plays Allie as he completely manipulates her every thought and perception of the events surrounding her. His sly smile colors his character with a wicked whimsy that makes the audience wish he would takes things just a bit further and be a devilish as the gleam in his eye. He single handedly makes the film worth watching.

The concept behind The Last Showing is intriguing as Stuart moves from scene to scene he has plotted out on index cards crossing them out as he achieves each goal in the script of death. The film hits its high notes when Stuart watches his plot play out on the video cameras waiting anxiously for the conflict to resolve, gasping joyfully as they conclude as planned. Later he provides his own voice over for the shots caught on silent cameras throughout the theater. It reveals when the character, the actor and the film makers are all having the best time. The script also has enough conviction to stick to Stuart’s plan even when it teeters on being discovered by the police as they arrive during the conclusion. The only flaw in the idea is that it falls prey to its own constraints preventing it from surprising the audience with anything imaginative or shocking. Sadly this makes for a predictable film.

Writer/Director Phil Hawkins shows great promise as a young director with a bright future. He displays a great confidence in his film with solid composition and a fluid pace. But he does not appear to be ready reach beyond his grasp, at least not within The Last Showing. He embraces his stars and makes the most of the environment and locales giving the film a strong sense of normalcy rendered askew by his character Stuart’s directions. But greatness is just out of reach, his script’s imagination is restrained, the boldness and audacity held back. The ideas fueling the film suggests something a bit more dangerous, more unpredictable. A little more delicate foreshadowing would go a long way.

The Last Showing is a sensational showcase for one of the living legends in the genre providing its star, Robert Englund, a chance to chew the scenery like a modern Vincent Price. The script touches on the sad reality of how the rapid changes in technology are changing the lives of those involved, placing its antagonist’s back up against a wall of desperation and futility. The script also leaves the audience wanting far more of that exploration of Englund’s Stuart and what is driving him to such lengths. Writer/Director Phil Hawkins keeps the events based in reality within the realms of the reaches of the lives the characters’ inhabit. While this grounds the film in believability, it does not prove to be all that interesting as the run time screams for something original or shocking to happen. The Last Showing is best viewed for its star to relish in his talent and his character. It proves lite fare for a horror film in general.