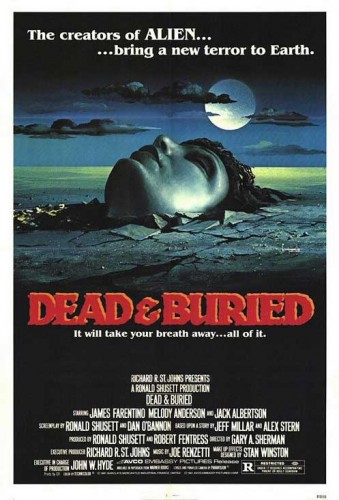 “Potters Bluff, Rhode Island. may seem to be a sleepy little town. At least for the casual visitor and the local sheriff, Daniel Gillis. However, all of a sudden, there are a lot of strange murders where strangers or people passing through are killed by mobs of townspeople. Only Sheriff Gillis has no clue to what’s going on. Fortunately, the town has an excellent undertaker, William G. Dobbs, who is happy to take care of this sudden death-wave which is good for his business. Gillis soon discovers clues that lead to many of the local inhabitants involved in the killings, including his own wife Janet.” (courtesy IMDB)

Ambitiously promising “A Fear So Intense It Will Stay With You To The Grave And Beyond”, Dead And Buried (1981) is a minor eighties zombie gem that often shared drive-in double-billing with David Cronenberg’s Scanners (1981). In the sleepy seaside town of Potter’s Bluff, New England, strangers aren’t wanted and are viciously mutilated by the local welcome wagon, who photograph their victim’s death throes with cheery relish. When a torched victim turns up seemingly alive and unscathed, the local sheriff (James Farantino) must confront the possibility that maybe death isn’t necessarily the end. 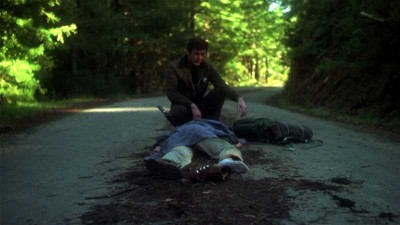 In 1969, James Farantino starred opposite Patty Duke in the film Me, Natalie (1969). He was nominated for the 1978 Emmy Award for Outstanding Supporting Actor for his portrayal of Saint Peter in the mini-series Jesus Of Nazareth. He appeared as Frank Chaney in the short-lived 1984 ABC series Blue Thunder, based on the 1983 film of the same name starring Roy Scheider. In the late nineties he appeared as Doug’s estranged father Ray on ER. Anyway, the sheriff’s investigation soon uncovers evidence implicating his local schoolteacher wife (Melody Anderson), who apparently teaches voodoo to her infants in class, and the town’s mad mortician Dobbs (Jack Albertson), who is given to ranting monologues about the beauty of death and his abilities as a cosmetician: “A sealed casket is obscene – I make souvenirs.” 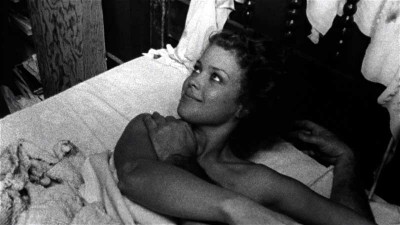 Melody Anderson’s first national exposure came as a Sweathog in an episode of Welcome Back Kotter in 1977. She made numerous guest appearances on television in the eighties, in series such as Archie Bunker’s Place, Battlestar Galactica, Dallas, T.J. Hooker, and The Fall Guy. She had recurring roles on St. Elsewhere and Jake And The Fatman. She was also a cast member of Manimal and was occasionally spotted in All My Children in the nineties, but will always be remembered as Dale Arden in the camp masterpiece Flash Gordon (1980). 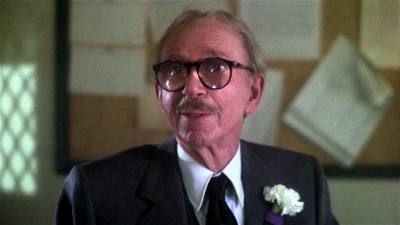 Veteran Jack Albertson’s first genre film was the first version of Miracle On 34th Street (1947), but is probably better known for his roles as Manny Rosen in the original Poseidon Adventure (1972) and Grandpa Joe in the original Willy Wonka And The Chocolate Factory (1971) and as grumpy Ed Brown in the popular seventies television sitcom Chico And The Man opposite Freddie Prinze Senior. 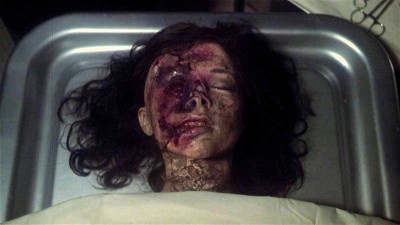 Directed by Gary A. Sherman – whose under-whelming resume includes Wanted Dead Or Alive (1986), Vice Squad (1982) and Poltergeist III (1988) – and produced by Walter Shusett, who co-scripted with fellow Alien (1979) writer Dan O’Bannon – Dark Star (1974), Lifeforce (1985), Return Of The Living Dead (1985) – Dead And Buried is a moody, American Gothic spin on the living dead legend. Delivering a couple of major jolts (one of which revealed on the DVD menu, much to my frustration!) and a twist ending that is either ingenious or ridiculous (depending on your critical faculties or level of intoxication), like most early eighties drive-in horror flicks, it isn’t adverse to some crowd-pleasing, horn-honking, high-beaming gore. The gruesomely convincing special make-up effects (a nasal injection of acid, needle in the eyeball, a twitching severed arm) are realised with grisly gusto by a rookie named Stan Winston. 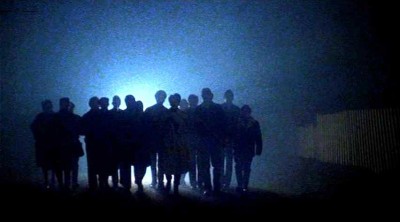 Despite a couple of grainy night shots (more a result of the source print than the mastering) the DVD I saw is pretty impressive with a subtle stereo audio mix – which is more than what I got at the drive-in, that’s for sure! Those readers familiar with the original murky rental VHS version will be thrilled to find out that the DVD version is completely uncut, restoring several moments of R-rated nastiness snipped from the original release. I’ll bid you a good night and look forward to your company next week when I have the opportunity to put goose-bumps on your goose-bumps with more ambient atmosphere so thick and chumpy you could carve it with a chainsaw, in yet another pants-filling fright-night for…Horror News! Toodles!