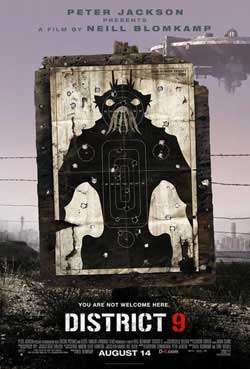 When aliens land on Earth, global business conglomerate Multi-National United forces them into rigid containment zones where they are compelled to labor, even as MNU commandeers their otherworldly technology for profit. As tensions build between human and non-human races, a rogue agent leads a resistance movement against MNU’s ruthless consolidation of power. Neill Blomkamp directs this cinema verité-style sci-fi thriller.

District 9 is a 2009 science fiction film starring Peter Jackson as the producer, directed by Neill Blomkamp and written by Blomkamp and Terri Tatchell. The story follows a colony of aliens whose ship sort of landed in Johannesburg, South Africa in 1982. The aliens seem to be without a leader and much of any motivation to do anything except deteriorate. You can almost hear the collective voice of the world saying “Well I guess we have to deal with this.”

The aliens, a little over a million of them, are place into a protective shelter which is run by the military. This could be one of humanity’s defining moments as a benevolent race except for one pesky detail, the aliens are ugly. They look like a cross between the predator and that guy from the Star Wars can’tina that I seem to remember my action figure package naming Walrusman. They speak in a slow speed drawl with insect-like clicks. They collect junk. They devour cat food like it’s a Ghirardelli sample platter. Basically they don’t do anything that we find valuable.

Ever read The Book of Questions by Gregory Stock? One of the dilemmas he poses that I’ve always been intrigued by is, would I tear the wings off a butterfly for some amount of money that I’ll probably never see in my lifetime? The follow up is, would I be willing to step on a c**kroach, thus indicating how he expects my first answer to be. Without divulging my latent greed to you, the subtext is clear. We value aesthetics. Pretty things matter to us.

Ugly things do not. This is a tale of dehumanization and all of its perks. The horror of the story is human indifference. When Johannesburg gets tired of dealing with our exoskeleton clad neighbors, Multinational United field operative Wikus van de Merwe is placed in charge of relocating the colony to their less inconvenient home, creatively named District 10. Wikus, played brilliantly by soon to be less than unknown actor Sharito Copely, deals with the aliens the way a highly skilled customer service representative deals with the loudest members of the public. Nothing phases him. He and his team abort alien eggs with flame throwers like it’s a rite of passage.And he gets in a little trouble with his supervisor, not because aliens were killed on that day, but because too many were killed.

Anyone who has been to high school knows what a villain appearance is. Wikus, like the rest of the film’s characters, ignore the amorality of what they are doing. But then fate hits him with the classic twist of plot, a chemical accident begins to turn him into this very thing he has shown no sympathy for. His left arm mutates into an alien appendage. This is bad news for his social calendar, but excellent news for the military, as he is now able to operate the alien technology. Their leftover guns were non-functional to the touch of human hands.
Now being partially alien, Wikus’s value as a human being has become irrelevant. He is nothing more than a thing to the scientists, to be dissected, cloned, injected, and who knows what else, unaffected by Wikus’s own objections.

He escapes, in the great tradition of monster films, and realizes the only place he has to go is the slum in District 9.

The visual effects are created by Weta Workshop and they do the two things that visual effects should do, take a backseat to the story and make you forget that they are visual effects. The plot is fast paced and for those movie goers who like to discuss their movies with each other there is plenty to talk about. The film style is very much like a documentary, complete with Blair Witch camera shakiness, though not so much as to induce motion sickness. Give this one a shot if you missed it in theaters.