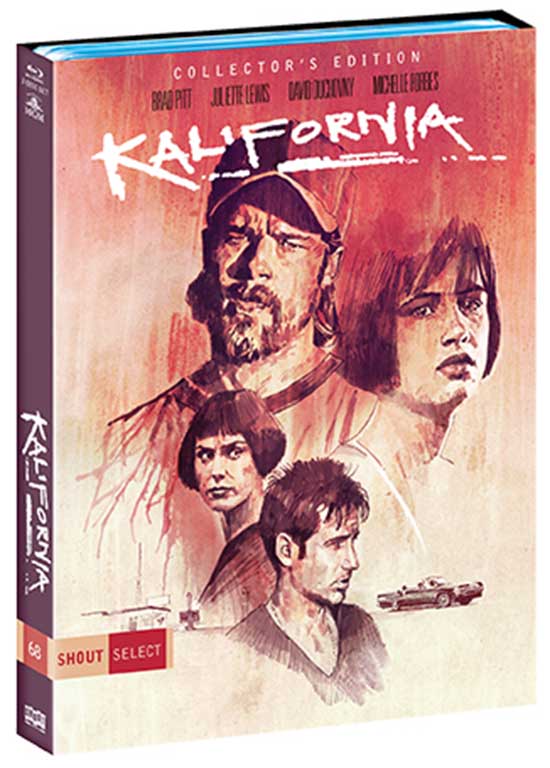 Researching a book on serial killings, writer Brian Kessler (David Duchovny) and his girlfriend, Carrie Laughlin (Michelle Forbes), travel cross-country to the murder sites. Hitchhikers Earlye Grace (Brad Pitt), out on parole, and Adele Corners (Juliette Lewis) offer to share expenses for the trip, but Brian doesn’t realize just how close he is to the topic of his book — even as bodies pile up behind them and Earlye’s landlord is found dead.

Hell-o everyone. This here review is for a film that I don’t know what to call, but brilliant from beginning to end. In brilliant, I mean every aspect of the feature in its entirety. The dialog is superb. The acting is awesome. The one thing that really stands out is the cinematography. I am talking about the cross country killing spree known as Kalifornia… That’s right, with a K. 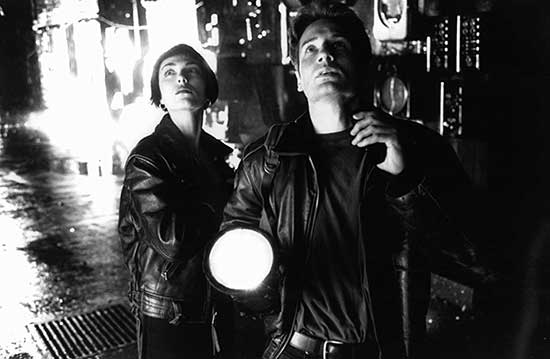 In my opinion, the brilliance in writing and dialog start off as soon as the characters of Brian and Carrie are introduced for the first time. Brian and Carrie are at a party. Brian is having a discussion with his friends on the topic of why serial killers and murderers do not deserve the death penalty because they, just as the victims, are only human and are people too. One of his friends bring up that he will believe that way until it’s his mothers head that is found. Brian sticks to his guns somewhat, until his love and partner, Carrie almost finds herself in that situation.

Another reason why this film is close to me is because Brian is a Writer with a taste for True Crime and Serial Killers, such as myself. His girlfriend, Carrie, is (besides as sexy as hell) a controversial photographer. The two lovebirds team up to travel across the country and document famous spots of the United States most infamous killings. They can’t afford the trip alone, so Brian puts up an ad, looking for a couple to travel with them and share the costs. 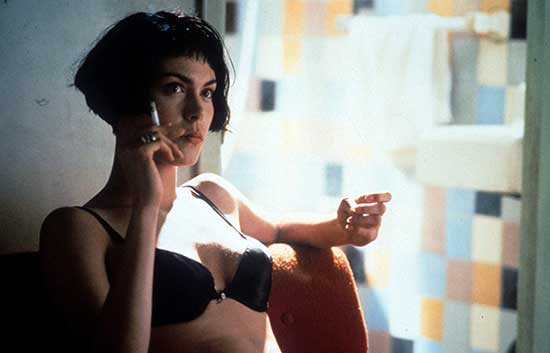 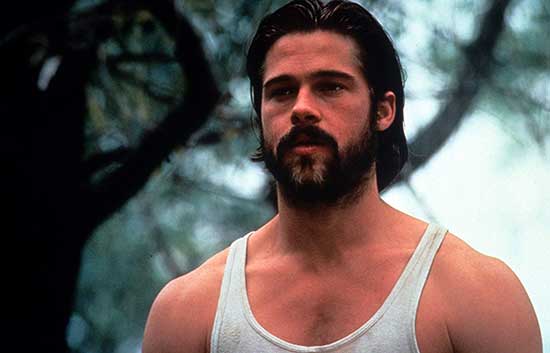 The couple that joins them are Early and Adele. Early (played by Brad Pitt of Twelve Monkeys, Interview with the Vampire, Seven, Inglorious Basterds) is an ex-convict out on parole. He has just killed his landlord and is looking for a way out of town with his girlfriend, Adele (played by Juliette Lewis of Natural Born Killers, Cold Creek Manor, Strange Days and Cape Fear). The two couples meet up and hit the road. From there, everything goes downhill in a black convertible.

The contrast here is unmistakable, we have the artist/writer couple of Brian Kessler and Carrie Laughlin coming together with the obvious white trash lifestyle of Early Grayce and Adele Corners united for a road trip. The contrast here was intended as we flip back and forth between lifestyles, surroundings, and situations. Each struggling in their own way but with extremely different options and histories leading them up to crossing paths. Brian and Adele struggle with their writing and photography that seems to be on the verge of bigger things but can’t get past the circle of critics and writers block that have made things stagnant. They moan of circumstances while doing so in their luxury apartment. On the other hand Early and Carrie deal with rent overdue, an angry landlord, and Early’s probation that is affected by his reluctance to keep a job. This contrast is intended to shift the balance over the course of the film. The irony here is that each couple is also struggling with money issues despite diverse backgrounds.

I will start off by the acting in this film. I know… Brad Pitt has so many films to choose from, but in my opinion, this is my favorite character that he has ever played… and that he probably ever will (unless they go through with the Devil’s Knot movie, in which he is looked at to play John Mark Byers. That would be a site). He is such a scumbag dirt ball in this film that it’s sickening in such a relieving way. This is absolutely not your typical character that he plays (and he has played many).

Early Grayce is rude, filthy, outspoken, sinister and pretty brutal at some times. That is not the only reason why I love this character. It has a lot to do with Brad’s delivery. This is a disgustingly brilliant performance on Brad’s part. Some of his lines, followed by his actions, are hilarious in a sinister sort of way as well. One of my personal faves is “This ain’t Lucky Lager,” followed by a breaking bottle over a once intimidating bar goer. He kills just about anyone that gets in his way, and behind his traveling mates’ backs, until they become his target as well. If you are a fan of Brad Pitt (I, for the most part, am not, but have much respect for the dude) and have not seen this amazing performance, you should absolutely check it out. 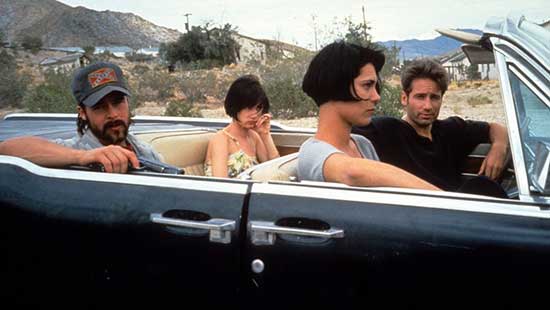 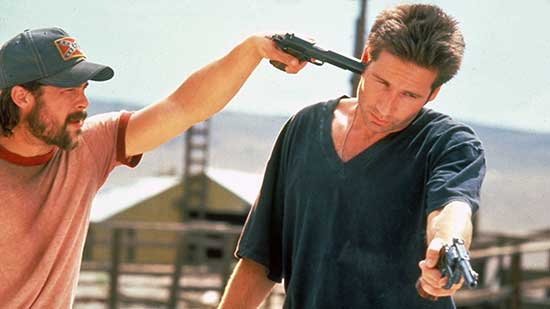 This is also one of my favorite characters that Juliette Lewis has played. Adele is a sweetheart with somewhat a weak mind and a bad case of denial. She knows for the most part that Early is a monster, but will not admit it to herself or anyone else for that matter. She befriends Carrie along the way and shares her darkest secrets about Early and her childhood in the most timid of fashions. At the same time, she hopes that he does not find out. I haven’t seen much of David Duchovny’s (The X Files and Twin Peaks) films, but he plays his part as the True Crime buff/ Serial Killer Sympathizer/ Writer very well in this film also. Michelle Forbes (Escape From L.A, True Blood) is just… absolutely sexy throughout the entire feature. 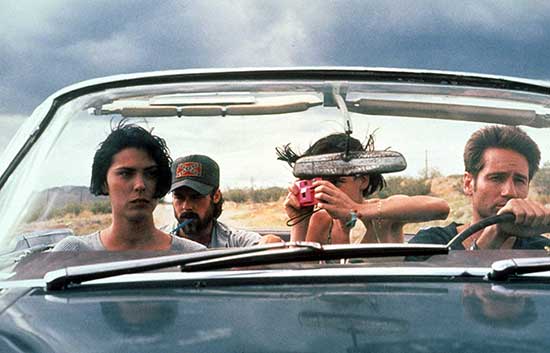 The cinematography is very well shot with almost voyeuristic shots at times. Another shot, such as zooming out from a closing front door layered in blowing dust is awesome as well. One of the most effective shots of the film is when Carrie is doing Adele’s hair and Adele is explaining her tragic childhood. Carrie’s reflection is shown through the mirror as it goes from drunken and fun-loving, to dead serious and depressing. Another great aspect of this story line is how Early’s personality starts to rub off on Brian. At the same time, Early tries to make Adele resemble Carrie physically… and at the same time as well, Carrie dislikes and distrusts Early more and more. 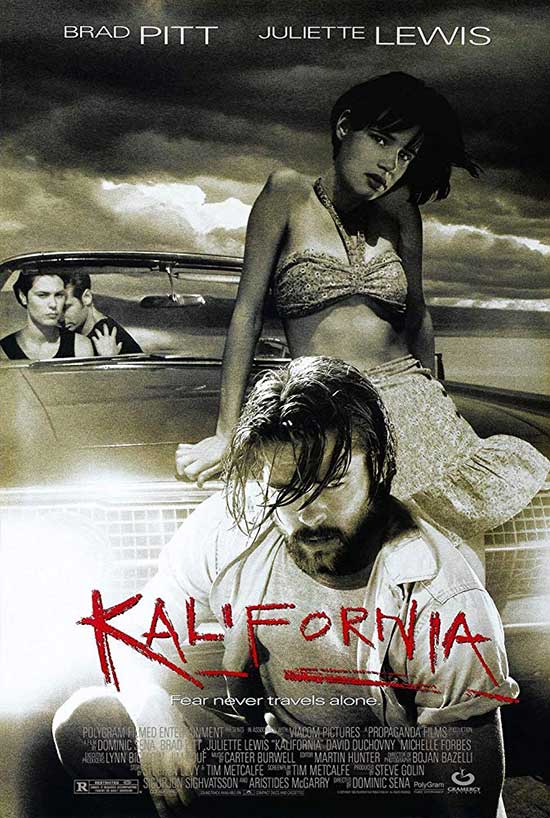 This film is a must see for fans of just all around good movies. Siskel and Ebert gave the film two thumbs up. With that being said, I give this film, Kalifornia, FOUR HORNS UP.

Kalifornia (1993) is now available on bluray per Shout Factory