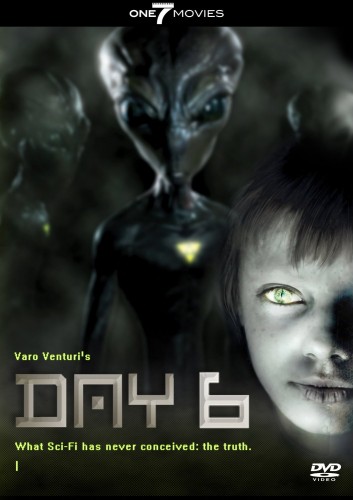 Dr. Piso studies the alien abductions. From the abductees under hypnosis, he has understood that some alien races have been installing, for millennia, their active memories in the people’s brains, to exploit a special energy: the Soul.

Varo Venturi’s Day 6 is another genre outing that has made its rounds under different titles: Alien Exorcism (U.S.), Alien Encounter (U.K.), 5 Giorni Sulla Terra (Italy), Eirian-Baasasu-Ekusoshituto (Japan), and 6 Days on Earth. Now out on DVD from One 7 Movies, Day 6 introduces a story that is intriguing but tests the audiences’ patience by inundating them with so much information that it becomes a bit much to follow. Although spoken (and apparently also dubbed) in English, there are no subtitles, and their absence is heavily felt. In a nutshell, the film is a fair attempt of mixing aliens with evil spirits. Dr. Davide Piso (Massimo Poggio) is a scientist who has dedicated his life’s work to the study of alien abductions. You would think that he would have taken notes from Whitley Strieber’s 1987 book on the subject, Communion, as he speaks with and studies people who claim to have been abducted. He is also interested in how these abductions affect the person and their soul. The aliens themselves look like they stepped off the cover of that best-selling book.

After a lecture that he administers on the subject, he is approached by Saturnia (pronounced “sa-TURN-yah” and played by Laura Glavin), a woman half his age who lets her sexual attraction to him be known. She asks him for help as she feels possessed by some other form of life (couldn’t it just be PMS?)

He soon discovers that an alien named Hexabor of Ur is possessing her and, according to the Day 6 website (the film’s official website), Hexabor of Ur is “an alien entity coming from ancient ages, from the site of Ur, according to the Bible the Abraham’s city of birth. A regal and disdainful personality, with a sexual androgynous nature, s/he believes to be the elected one, destined to entirely possess a human ‘container’…” Loosely translated from Italian, I am guessing. Dr. Piso has developed a method of getting abductees to relive their experience of being abducted by hypnotizing them in order to “exorcise” the alien that has possessed them so to speak. He employs this technique on Saturnia but soon learns that she cannot come out of the hypnotic state, and this permits the Hexabor of Ur to flourish and attempt to attack mankind. Desperate, Dr. Piso keeps Saturnia sedated so that he can work to find a solution to get her out of the hypnotic state.

The film has received more than its fair share of negative reviews, but I would say give it a chance. It’s by no means a great film, but it is very ambitious for the subject matter which attempts to mix alien abduction with soul possession and does so nicely. I can’t say that I have seen this type of story before. Laura Glavin is quite good as Saturnia. Ms. Glavin has been appearing in the Italian television series Don Matteo since 2009 and is best known to audiences for her work on that show. Massimo Poggio is also good as Dr. Piso, however this being an Italian film, all the dialog is dubbed and sounds read from a script. Think Dario Argento. Just about all the dialogue is obviously looped, but there is a fairly good car chase halfway through the film. It ain’t To Live and Die in L.A. (then again, what is?), but it’s decent.

The film was shot digitally and the lack of subtitles is puzzling. According to the end credits, the film was shot in April 2009 (this is information that I have never seen disclosed in a film credit before), so we are seeing this film nearly six years following its production.

There are two extras on the disc. The first is a 56-minute “documentary” called Sci Real which is conducted in both Italian (with English subtitles) and in English, and purports to be a documentary on the phenomenon depicted in the film. The second is the theatrical trailer.

I would have preferred the film to be in spoken Italian with English subtitles. Perhaps a future Blu-ray release will contain just that.