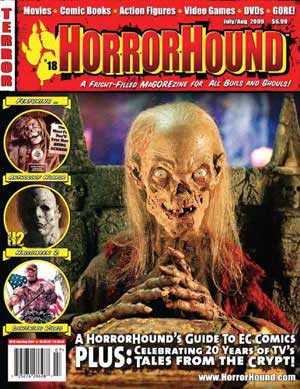 It’s that time of the month! Just got a fresh new Horror Hound edition to peruse and as usual this ones chock full of goodies!

I say that because HH has a special talent for creating sections within the magazine that literally do the homework for us. No, not your smattering of interviews which you can find in any horror magazine , online or printed…but true archival information that you can turn to years from now and still appreciate.

Let’s get the interviews out of the way…. We have a some exclusives with Sheri Moon Zombie on the new film of H2, We have an interview with Craig Perry on Final Destination, Stuntman Chris Carnel and some anticipated news on the mysterious enigmatic Trick R’ Treat.

Still a real pleasure to see and read about is the video Invasion section of the mag. This issue they take a look at Lightning Video. Now some of the distributor names may not ring a bell but certainly the titles do. In fact, if I remember correctly when these little gems were out we were still in the early Blockbuster days were you could go down the “horror” rental aisle and pick films based just on cool cover art. In fact the spread in the magazine rings back these old memories. Some of these titles went on to better places, however most are relatively lost in the where are they now category.

A few of these stick quite well due top their titles. “Neon Maniacs”, “Necropolis – City of the Dead” and that odd one i never rented…”Zone Troopers”. Then there is the one which called my name every time I passed by it….”Nightmare Weekend” but ended up being a huge piece of dooky. We get a bit of the ways of the past as Horror Hound gives us the goods on the Lightning Video fiasco. Which in those times seemed to be a common thing just different players. Of the selections though “Mark of the Devil” has to be my all time favorite.

Toy news bangs out some more creepy releases. Of course Twilight makes another appearance as the toy manufacturers try and cap on the “wave” before it passes.Even though there is some cool stuff here, my vote this issue goes to the oddly Lovecraftian beast “Nyarlathotep”….now there’s a mouth full.

Here’s a treat! – “The 20 most essential anthology horror films”. A great piece indeed that covers a whole mess of horror anthology films that I’d recommend myself. While some of these might be a faded memory, others still stick your gut as clear as yesterday. The thing that you’ll notice and I did as well, is that the best of these rooted up mostly in the 80’s. I think this has to due with the anthology style really making a bigger impact then than now with anthology films these days coming and going quickly and forgettable. One mistake that I’d point out only because the film rocks! is #17 “The Offspring” which was re-released under the new name of “From a Whisper to a Scream” and is available on DVD. Sadly titles like “Necronomicon” and “The Willies” are still trying to find a home. You can however track down bootleg DVDs of these titles if you can’t wait. “Necronomicon” is one of those gems I couldn’t wait on.

Tales from the Crypt gets an excellent homage and feature that is worth the price of admission alone. Covers presented in a nicely laid out spread. Toys, dolls, comics, DVDs , pinball machines and even those collector spreads of VHS covers are here to see. In fact if you are a fan of the series, then this section alone is collectors item. I especially got a kick out of the Mad Magazine covers insert which features Mad focused horror covers. Alot of history is presented, the highs and the lows of a major franchise. As it is stated the film releases began with “Demon Knight” which made a killing at the box office. The follow up releases of “Bordello of Blood” and then eventually “Ritual” had left the a bad mark on the franchises ability to deliver successful horror films. Though beyond that it was great when they finally decided to start releasing the series on DVD which contains some of the most classic anthology episodes ever seen.

Horror Hound takes a quick look at the “gross out” line with some crazy looking toys. My roots are planted still in the “slime” days, so many of these odd little beast escaped me on the most part.

With open arms we greet another edition of “Horror’s Hallowed grounds”. this time we visit some locations dealing with “Halloween 2”. the original that is. Fans of the franchise can visit the “Halloween” visit back in issue #8. Which come to think of it, I’ll have to order that one up. Every time I look at these explorations the question of “how did they figure out where all these places are” comes to mind. My guess is some pretty thorough movie studying and maybe a hand or 2 from the creators. Very cool and essential. The history overview alone is quite a treat, plus some reveals on sets that were re-sued in other films.

Ok, if you haven’t guess there’s “alot” of choice stuff in this issue, I’m like a silly little girl with glee! or something to that fact ;)

TV anthologies: A favorite in my library and a greta piece to cover. I’m sure there is a few of these that will trigger the “oh yea” factor. One in particular was an old fav that needs to seriously get a rebirth…”DarkRoom”. Though I was surprise they didn’t mention the groundbreaking “‘The Siege of 318’ episode which made a big splash at the time using animated toy soldiers. “Freddy’s Nightmare” was another that I used to tape weekly then lost them all due to old video tape wear down. “The Hitchhiker” an older HBO spin off can actually be found quite cheap if you look hard enough. In fact word is copies of the 3 seasons have shown up in “Big lots” stores for $3 each! “Tales from the Dark side” just got a re-release on DVD and “The Masters of horror” is just downright………..an essential to own.

There ya go the major stuff …check em out and pick one up!