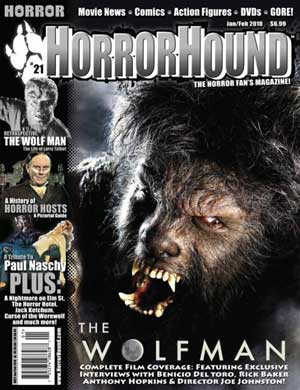 The Wolfman is in the air…. No surprise with the newest addition to the franchise just around the corner. I’ll admit to never “really” being a wolfman fan, however I must admit that there are alot of werewolf films I really dig. I’m sure the newest one with Benicio Del Toro will be a keeper for sure. So to segue that into the latest HH issue we have a huge tribute edition to the wolf man movies, toys, goods and paraphanelia. You got to love the work this mag really provides for us. All sorts of toys from days long past, photographed and displayed for our enjoyment… HH has real heart.

The mag starts out with some great interviews with the talent behind “the Wolf man” 2010. Highlights feature interviews with stars Benicio Del Toro, and Anthony Hopkins as well as a nice page to long time wolfmaker “Rick Baker”. Rick’s got to be as as happy as a peac**k coming full circle several years later to dazzle us all again with his unique and original methods for bringing the wolf man character to life.

Toys, things and all stuff werewolf, I’m sure a few of these will ring some bells in the back of memories. Some of these wolf man packages have long been forgotten decades ago but pop back in my mind like yesterday due to the magazines efforts in collecting and presenting. Very cool and a treat to behold. Now if I can only remember where I placed that wolf man figure????

The gore met – takes a 2 page spread with some retro work on gory covers. Ya, I faintly recall a few of these that did just what the article says…horrified and shocked. The added summaries are very helpful as renters might be misled with a tasty gorific cover and put to sleep upon viewing. Still a couple of classics – Gore Gore Girls, and Wizard of Gore are included that will do the trick.

Moving on we get to wet our chops on some early elm street coverage. This article called part 1 will span over several articles. We visit with the producer, director and makeup designer who each get a few questions thrown at them. I’m sure fans will want to no more especially when it comes to re-envision an iconic classic horror franchise. It also look like next issue may be the Nightmare of Elm Street issue! Don’t want to miss that one.

Horror Host high pays tribute to the collective hosts of lat night horror shows. Buckets of hosts are featured per picture insets as the article covers a bit of its history – bonus points for middle spread poster format!

Jack Ketchum gets some props and kudos for his outstanding work in the literary field. If it isn’t evident, then maybe you should ask the wave of filmmakers pining for his material. A few of the finished films are covered….and quite good stuff if you ask me.

Paul Naschy is a a name that’s been popping up more these days with the re-issuing of several films he’s been a part of. Very nice coverage on the man and his work. A few classic posters of his films are also included for readers who want to look up his work.

Ok, that rounds this issue – quite a bit to report on, that’s another notch on the coverage and research for inquiring minds and genre lovers.
Here ya go: