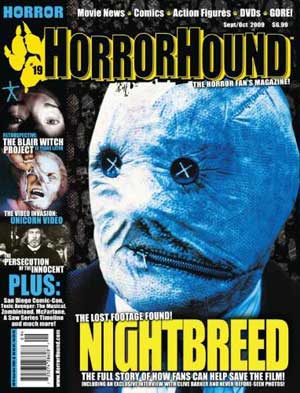 Nightbreed, I’m sure from judging by the cover feature..I’m not the only one thinking….How can a film so cool be kept so long off the market without a decent special edition or extras release? The rumored lost footage is perhaps one of the more intriguing news for collectors this year. I’m glad to see a magazine has taken steps to put some focus on that rumor and maybe even nudge the powers that be into a long awaited release. As the story is told, i must confess the whole ordeal saddens me. A film held under for so long and yet no interest from the studios that hold the master files. The tale of Nightbreed is explained in great detail and how the rumor of a 2 hour and 44 minute version exists though without support from Morgan Creek to do anything with.

As the article ends it gives information to contact the studios and request action be taken. I suggest you all do so. Barker has a right to present the film as it originally was intended. And the horror community I believe would extend open arms to the never before seen extended cut…but for now only time will tell.

Unicorn Video, with its discussed clam shell cases and off beat witchcraft driven titles is a line of films that have eluded me as well. Collectors report paying $50-$200 a title for lost editions, though I have to say I honestly have never seen a single one of these releases. Impressive cover arty and an appropriate line that easily would have found homes in video stores requiring titles that offer something new, this little bit of history is a great keep sake for fans wanting to dig into the 80’s VHS film shelf culture.

Toy News offers a bit of the same ol stuff we are probably tired of seeing. Please no more Ghost Busters paraphernalia, there’s got to be something better being offered. Well closer look has a glimpse at a pretty cool Halloween 2 toy release and some Dark house statues that do the trick for me. Oops i’m taking that back…. I’m gonna put my vote in for the nostalgic “Twilight Zone” collectives in full glorious gray and even a “mystic seer” release. Does Shatner know about this one?

Dissecting Saw, is well …… essential? Yes I believe so …I’ve seen them all, collect them all and still have a hard time drawing a connect the dots relationship. Nicely done retrospective to hone in on SAW universe relationships. Flip one page and you’ve got the SAW DVD release collection. Man, that marketing department must have been busy! I think I’m fine with 1 copy of each but for collectors…there’s a few new ones I just “SAW” at Walmart that are missing here …better jump on it!

“The House that Todd built” is a great overview of all things horror and 7″. Of course starting with the groundbreaking story of McFarlane’s Movie Maniacs series we get a nice overview of a bit of the Mcfarlane toys history. And like myself, who often wondered why Todd had abandoned the monsters for sports will get the reason why anything good is forsaken… money and sales. With his much copied style still he spawned a whole slew of other toy companies bent on selling figures and capping off his wave. This article gives an intro and overview of each of these. Many of which I’m still thankful that exist including the NECA releases of the Hellraiser figures. Other toy companies get there feature here as well bringing the whole industry under one solid article.

Blair Witch gets a tribute of sorts to 10 years of time passed between the one off phenomena. Products are profiled and the story of the little engine that could is once again revisited. Yes, we have read our share of Blair Witch stories but they always seem to add more to the picture with more of these that are released. A really solid introspective on the BW clan and the studios that killed it as well. Best left as a memory of something new, I still remember that eerie sensation I experienced upon first watch. Then the cold calm came that questioned the existence of evil things that hide in the woods. Those were the days, let’s hear it for a unique time in horror.

Mark of the Devil gets the respect it deserves with a 2 page feature on the film. One of my all time favs and favorite villain (Reggie Nalder) this article hopefully will indulge a few viewers to seek this out and experience it for themselves. Haven’t seen the famous tongue cutting scene, then what are you waiting for?

“Hallowed Grounds” visits some locations for “Texas Chainsaw Massacre”. While most looks mulled over from the original days one particular location caught my interest..The junction house , now a restaurant but film lovers can eat and see the house where it all started to the sound of closing metal doors and chainsaws in action.

Other feature worth checking out includes interview with Paul Soliet of the film “Grace”, some features on “Zombieland” and 80’s remakes!

Oh ya, …. wanting to dress up like the guy from Valentine’s Day? look no further!