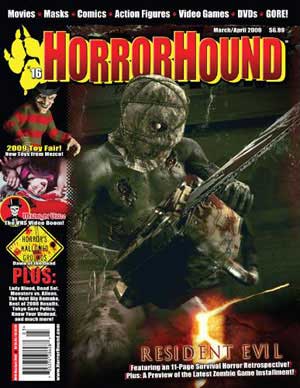 I love a well thought out magazine. Horror Hound continues in its highly entertaining style of combining retro fare with modern cinema for horror fans and enthusiasts. Never short on interesting material, they give you some things upcoming and a few that you might have forgotten…so lets get started!

What a great one to start off on, this issue is dedicated to zombies and Resident Evil ( a personal fav of mine) We have 1 page features on the films “Lady Blood”, “Last House on the Left- remake”, and “Monsters VS Aliens”

A little more coverage is given to the UK Dead Set series, of which I’ve heard good things about. Essentially a 6-part TV series that aired with all kinds of Zombie goodness.

If you don’t know the name, you should. As Horror Hound dives into 10 questions with prolific director John Gulager from the Feast and Pulse series. “Video Invasion” takes us to that special place I was talking about. An age old VHS series that some will remember, and some just won’t. However this was a frequenter in the 80’s with titles like “Microwave Massacre” to name a few. It will warm your heart as you see that video chains such as “Video Mart Corp” are still around to offer these old title for rentals. You may have to blow the dust off your VCR but that’s the way rolls for these never made it to DVD classics (or so it seems).

An area that I never seem to get enough of are the old classic movie posters. In “Tech Specs” we get our fill of sheets, specs, lobby cards and retro posters on all that greatness. Apparently many of these classic items have raised the EBay bar on collectors shelves with some title pieces going for high dollar. Hey I know I should have kept those things! Of course the trends have changed with new materials arriving in several different formats and simply as digital pieces themselves.

Toy News! How ya gonna know what to buy if someone doesn’t keep ya informed? Well Horror Hound has saved the day with nice color pics featuring all the latest kiddie gore and adult stuffies on the market. There never seems to be enough Jason, LeatherFace and Myers so that’s what we get… old style coolness for new style collectors. I’ll pass on the Twilight Dolls, however that new “Patient Zero Figure” is calling my name. Turn the page and low and behold Vincent Price in his “Red Masque of Death” is now on my new Christmas list. Very colorful with nice images within.

Of course we get updates on Horror comics, an undead quiz and Bamm!! right into the heart of “Resident Evil” tribute pages. Now this spans over 9 pages, so you get you fill here guarateed!

The staff decided to write about there recommended remake suggestions…that’s alot of fun. But my eyes were more glued on the “Tokyo Gore Police” coverage. An all out bad ass film that I think everyone should see. Wanna see something new? check this radical over the top film…..do it!

Now we do end on something worth a look twice! A that was then and this is now comparison of “Dawn of the Dead” set locations since its original debut back in the day. I know this endeavor would take up all my time so it’s good to see someone else did it for us. I’ve been to that mall a few times and its nice to see how it changed over the years.

Awesome edition – now quit reading about it and go pick one up!!