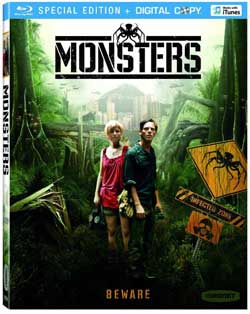 Six years ago NASA discovered the possibility of alien life within our solar system. A probe was launched to collect samples, but crashed upon re-entry over Central America. Soon after, new life forms began to appear & grow. In an effort to stem the destruction that resulted, half of Mexico was guaranteed as an INFECTED ZONE. Today,the Americans & Mexican military still struggle to contain the massive creatures….

Ok my (un)friendly acolytes, It’s me again: The Black Saint & today you’re gonna read & listen to my pontifications over a movie called “Monsters” being released in October by Magnolia Pictures. But before I get to the actual review wanna talk a little bit about the people who attend these “Private Screenings” cuz they sorta bug me.

This screening took place at the Magno screening room in the heart of midtown Manhattan. I’ve been there before & it’s your usual screening room: 40 or so seats, Nice size screen, No snacks or drinks whatsoever (F*ckin’ snack Nazi’s). And once the movie starts there is dead silence. I also like the fact that the lights are turned out completely in screening rooms. You ever notice that nowadays they never really turn out the lights i your local bijous? They just sort of dim them enough to make it seem dark but it really isn’t ever completely dark. Why? i dunno but I don’t like it. The Saint likes it black when he’s at a movie no matter what it is.

Anyways, These screenings are usually populated with film “Elitists” who sit around before the screening & talk about the merits of foreign films starring Jean Seberg. And they talk & they’re loud as if if they talk louder than whoever they’re talking to it makes them smarter. It just makes you louder ass wipes. There was an actual argument over whether “Eat, Pray, Love” (the latest Julia Roberts celluloid abortion) adhered to the book as much as it could / should have. I hate all of them & wanted to swing my scythe across all of their necks & just watch the movie on my own. It’s bad enough you can’t snack there, I gotta listen to their caterwauling as well? Fuck them!!

But I will admit there were more people there for this screening than I expected. As a matter of fact just about all 40 seats were full which is testament to the buzz surrounding this movie. I was waiting for my buddy Tony Timpone of Fangoria magazine but he was a little late so we didn’t sit together but we compared notes afterwards. He, my friends is one of the coolest people in the horror business in general & it’s a priviledge to call him “friend”.

What this you say? What about the movie? Ok already, you asked for it. Firstly any movie that has the audacity to call itself “Monsters” better be pretty f*cking kick ass. And although the film has it’s moments..It didn’t kick the Saint’s ass at all. Then again it’s kind of hard to kick my ass period. Cinematically anyways. The film only has 2 main characters: Sam, played by Whitney (All The Boys Love Mandy Lane) Able as Sam, an American tourist in Mexico trying to get back home to her wealthy father & Scoot (In Search Of A Midnight Kiss) McNairy as Andrew a jaded American journalist/photographer who works for Whitney’s dad & agrees to escort Whitney through the Infected Zone to the safety of the US border. 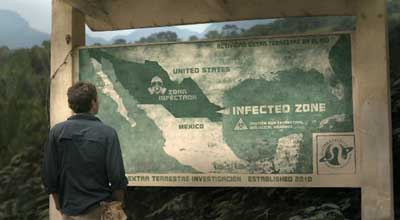 Whitney able is an attractive combination of Cameron Diaz & Radha Mitchell but could not act her way out of a paper bag. Her line readings were flat throughout the movie & she showed little if no emotion at all even when faced with being consumed by the titular creatures. Scoot was a bit better as the harried journalist but he was really no great shakes either. Now if you’re thinking that the movie only has 2 main characters in it then there ought to be a lot of dialogue in it right? Well you would be correct my dear acolytes. Which is another problem with the movie. It’s called “Monsters” not “My Dinner With Sam & Andrew”, unfortunately there is a lot of talking going on here at not a lot of it about the monsters themselves….

As to the monsters, the word is that director/writer & I guess everything else-er Gareth Edwards created the effects in his basement on a laptop computer. If this is so then he is to be commended. Although we really don’t see as much of the creatures as I would’ve liked when they showed up they showed up convincingly. I was a bit bummed out that there wasn’t a variety of monsters in the film. I mean it’s called “Monsters” for a reason right? I was expecting an array of beasties not just minor size variations on one. What do they look like? You know I don’t divulge info like that in my reviews but I will say they reminded me of a monster from a toho studios pic from the 70’s. Decipher that anyway you like cuz’ that’s all The Saint will offer up to you.

I thought the fact that the Mexicans were sorta used to the creatures being around funny. They just went about their daily lives not getting too close to the Infected Zone. But then I started thinking & this is what ultimately killed the movie for me. Why were the monsters only based in Mexico? They certainly seemed capable of going elsewhere on the globe to wreak havoc. In addition it’s never explained where the probe picked up the samples that ultimately ended up on Earth. Was it another planet?, asteroid, a newly discovered planet? I couldn’t say cuz’ they didn’t say. I might be nit picking a bit but I would think these are salient bits of information that would’ve fleshed out the story a little more. And as to the ending…well let’s just say it didn’t clear things up for me. Perhaps it will for you. I don’t think so though & since I am The Black Saint I am obviously right in my comments about the whole movie, not just the (enigmatic) ending. Don’t piss me off miscreants, I know where all of you live & if you look under your bed before you go to sleep tonight you just might find me waiting there for you. By the way if you do look under the bed tonight try to clean up a little bit…I hate waiting under beds that have a lot of toys & shoes & crap under them. Doesn’t leave me much space for my Scythe. You know what I mean? Good.

So all in all I’m giving “Monsters” 2 1/2 Shrouds out of 5. Mainly because of the amazing effects on a budget work that Gareth Edwards produced & a couple of funny lines that a few Mexicans had. But I still adhere to the notion that just because you can produce a movie with very limited funds & get good effect work to go with it, it doesn’t mean you should go ahead & do it. Especially if your script has some pretty gaping holes in it. But all in all it could have been much worse so it gets the rating it got. In the future I would advise Mr. Edwards to get a solid script in place before he proceeds with his next cinematic venture. Most of you peons will probably like it more than I did & while that doesn’t make me particularly happy I will magnaminously allow you a bit of happiness if you see it & like it. I’ll get to you….eventually.

If you wanna see a kick ass movie this week & are into Martial Arts films at all then go out & rent or buy “Ip Man” starring Donnie Yen. It has some of the most amazing fight scenes I’ve ever witnessed in any film I’ve seen. Period. Do yourselves a favor & watch it as soon as you can. It’s actually a bit of a history lesson as well so you clowns might actually learn a little something while you’re being entertained so completely. No gore & very little blood but man is it exhilarating to watch. 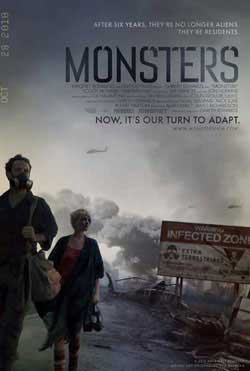 So that’s all for now my loyal acolytes, My bony fingers ache a bit so I have to dip em’ in some Hydrochloric acid to get them back to snuff….what? You don’t use acid when you have body aches? You don’t know what you’re missing people. Just remember to brush your teeth, do your dishes, watch “Pawn Stars” on the History channel & as always before you go to sleep get on your knees & say your nightly prayers…TO ME!!!