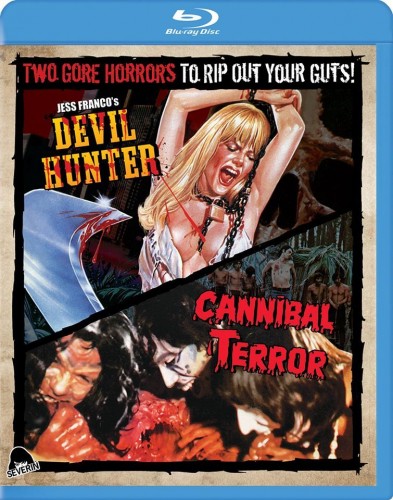 The story is set amongst jungle tribes that live in fear of the devil. Laura Crawford is a model who gets kidnapped by a gang of thugs whilst working in South America. They take her into the jungle and demand a huge ransom. Laura is guarded by some ridiculous looking native who calls himself “The Devil” and has to go through all manner of unpleasantries until the gang get their ransom. Chained maidens are offered in supplication and the devil demonstrates eating p*ssy in a grossly excessive literal manner. Enter Peter Weston, the devil hunter, who goes into the jungle in true Indiana Jones style to try and rescue her, which he does (eventually).

So what have we got here. Let’s see…. a naked tribal woman on a stick, a hollywood starlet chained to a cave wall. A demon tribesman with a bad case of pink eye and a hunger for pink flesh. A group of thugs who kidnap the starlet for ransom…. yep, its Devil Hunter by the legendary exploitation director Jess Franco. Hot with sexplotiation, cannibalploitation, blackploitation and a few other words I can’t draw out, it’s more jungle fun and nudity galore thrown into the demonic mix for fans of euro trash films.

Our starlet Ursula Fellner is literally yanked from her tub and bound with her hands tied highas part of a kidnapping scheme. The object here, to acquire 6 mill in ransom for the return of the lovely starlet actress. Meanwhile, she becomes the ransom play-toy as she’s raped and fondled by the kidnappers to pass the time. The whole film though is a segue from one nude scene to another. The island devil as the tribes folks refer to him as, is satisfied per way of traditional ritualistic female scarificed tree bindings. The weight of the story is centered around the 6 mill ransom and the hired gun (Ali Cliver ) paid to bring Laura back with money in hand and a reward payment. There’s a bit of gunplay and scheming from both sides as they each try to win the upper hand on the dealings. Much of this reminded me of earlier cop shows from the early 80’s. 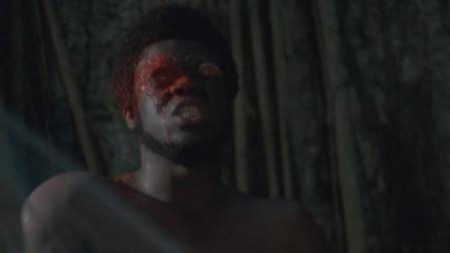 Through a botched first attempt, Laura runs free only to be apprehended by the tribe who also places her up for sacrifice. Only this time it requires the additional ritual of 3 dancing females who gyrate like monkeys around the pole-tied Laura.

The pole tying thing seems to be a big visual aspect of this film if you haven’t guessed it already. Now meanwhile, this devil dude is lurking around in the bushes. His eyes are bloodshot and bulge out like a diseased bug but yet he somehow seems to find his way around. In between all this exploited goodness a few kills appear here and there. Though I have to say they have some of the most unrealistic blood I’ve seen yet on screen. I’m assuming it’s some sort of strawberry yogurt syrup mix, because of its bright pink color. 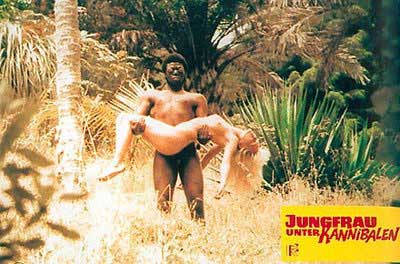 In one scene, I had to laugh as one of the crew finds his partner hanging from a tree as he’s screaming with the yogurt blood droppings spilling unto his face. I was waiting for him to lick his chops and ask for more, but it never happened. Now add in a couple more scenes of woman bathing woman, black chicks humping the air and too many full frontals of the black devil’s dude junk and you got your film.

As it goes the Actor Ali Cliver does his best Macguyver as Peter Weston and in which he saves the day, gets the chick and sails into the sunset (literally).

Devil Hunter is probably not the best title as it’s really not about hunting the devil though it sounds good for marketing. I also wouldn’t have called this that much of a horror film though it does have a few interesting kills from the bug eyed tribal guy. Really this is more for the fan base of the old 80’s Euro-sleeze collectors who want to see there video tapes replaced with a nicer transfer. There is also the idea of a film that literally ignores modern political correctness to serve it up as the filmmakers see it. That doesn’t bother me so much, as its just fiction anyways, but some folks tend to get offended when they see a naked black man chucking spears, whipping his junk around and dancing like a monkey possessed. Though for good measure, I should mention that our main actress Ursula Fellneris is seen full frontal nude throughout most of the film. With the tribal chicks pawing around on her box multiple times it certainly has its own bit of pervisity. 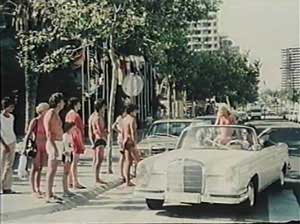 This kind of stuff is the appeal to these films. That taboo crossovers into the modern way of of thought. As always, I say have fun with it, and take it for what it’s worth. I recommend these for parties of folks who like to heckle the screen.

The transfer of this euro trash video nasty has been upgraded to high definition with a added interview with Director Jess Franco.

Devil Hunter is now available on bluray per Severin Films