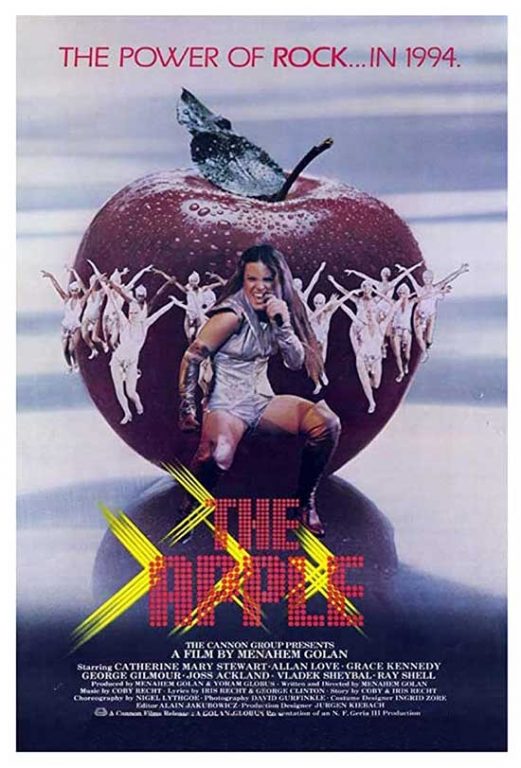 I’m sure a lot of you remember Cannon Films, and for those of you who don’t, you missed out on quite a bit of fun. Until it finally closed down in ’94, Cannon pumped out a lot of fan favorites. Most of Chuck Norris’s films came from their studios, as did the Texas Chainsaw Massacre 2 and the always fun Lifeforce. They seem to be mostly known for their low budget output, of which there were many, and you’ll find a lot of us b-movie fans remember them fondly for that. But even Cannon had its fair share of Turkeys.

This brings us to The Apple.

The Apple was a passion project for Menahem Golan, one of Cannon’s founders. He directed this 1980 sci-fi/comedy musical which was released in 1980. It takes place in the future year of 1994 (having it take place in that year is kind of ironic, isn’t it?), and takes place in a dystopian society where Boogalow International Music (BIM) seems to be in control of most of society. An aspiring musical duet, Alphie and Bibi, take part in a musical festival. However, the owner of BIM, Mr. Boogalow managed to use his influence to have his own performers win. However, he still offers the duo a $10 million contract. Alphie doesn’t sign, but Bibi, tempted by the riches, takes the deal. She then plunges into the seedy world of BIM. Alphie then tries to free Bibi from her contract, risking his life in the process.

Now, in previous reviews, I mentioned that I’m not a fan of musicals, with only a few exceptions to that rule. While I may have a bit of a bias, I don’t see how even those people who are fans of the genre would like this movie. The songs are terrible. They’re both badly written and badly sung. The instrumentals and everything about the songs will make most people cringe. Even if you’re a fan of disco-era music, I think you’re going to find it hard to find a single song that doesn’t make you want to slam your head against a brick wall. The fact that most of the fashion and music were from an era that was already coming to an end and reflected up sneeringly by the public, it only serves to further date the movie. Unless you think garish spandex outfits fashionable, you most likely would end up laughing at the costumes.

The Apple is also about as subtle as having a road crew hold you down while using a jackhammer on your forehead. You won’t have to expend a lot of critical thinking to realize that Alphie and Bibi are supposed to be Adam and Eve, Mr. Boogalow is the serpent tempting Eve with an apple from the forbidden tree, etc. Song lyrics are so blatant with what they mean that it’s almost insulting to an audience’s intelligence. It’s like whoever wrote this movie felt like the general public are idiots so wrote it for sixth graders. Which is kind of hilarious how much implied sexual content and drug usage there is. (And honestly, it’s not implied so much as rubbed in your face). It’s hard to determine whether the screenwriters are being condescending or if they’re just idiots.

The acting is equally terrible. Even Catherine Mary Stewart, who plays Bibi and is normally a decent actress, is painful to watch here. Everyone’s performance is over the top and clownish at best. How much of this is the fault of the performers, the director, or a combination of both, is up for debate. Whatever the reason, the performances border on the embarrassing. I wonder how many members of the cast wishes they could erase this film from their resume. Let it be said that their cartoonish acting adds that extra something that helps make the film unintentionally funny. Whhich, considering that it fails at being intentionally funny, adds another layer of irony beyond having the film set in the same year that Cannon films would stop operations. 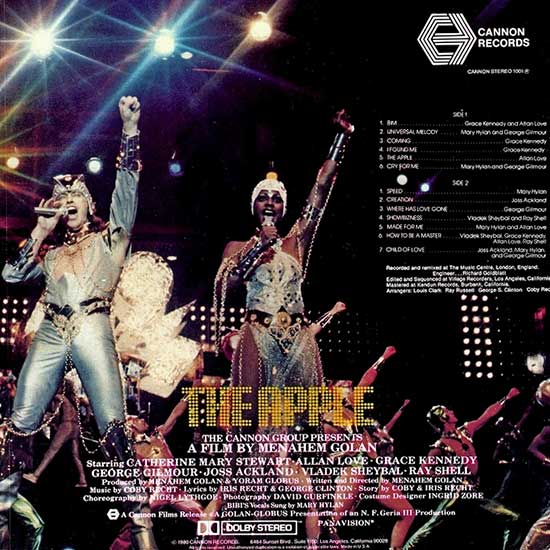 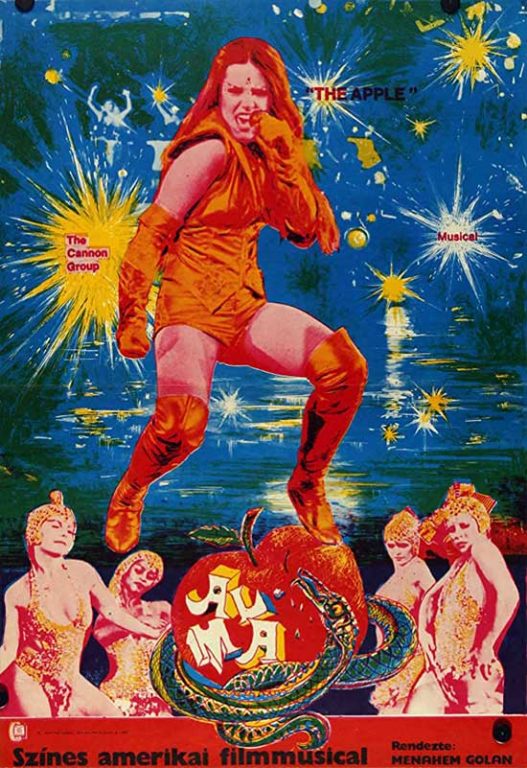 The Apple is a terrible movie. It has ugly fashion (if that matters to you), crappy songs, and some absolutely cringe acting. It lacks subtlety, artistry, or tack. It’s a perfect mixture of terrible, but it manages to be entertaining for it. Yes, we have another one of those train-wreck movies where you can’t stop watching no matter how awful everything is. As a result, it’s another “have some friends over to laugh at it” kind of film. It is definitely not something you sit through for art appreciation, that’s for sure.