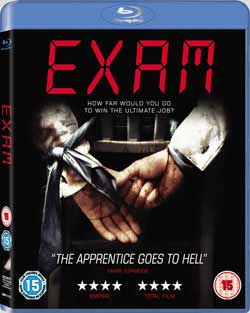 Eight talented candidates have reached the final stage of selection to join the ranks of a mysterious and powerful corporation. Entering a windowless room, an Invigilator gives them eighty minutes to answer one simple question. He outlines three rules they must obey or be disqualified: don’t talk to him or the armed guard by the door, don’t spoil their papers and don’t leave the room. He starts the clock and leaves. The candidates turn over their question papers, only to find they’re completely blank.

After the initial confusion has subsided, one frustrated candidate writes ‘I believe you should hire me because…,’ and is promptly ejected for spoiling. The remaining candidates soon figure out they’re permitted to talk to each other, and they agree to cooperate in order to figure out the question: then they can compete to answer it. At first they suspect the question may be hidden in their papers like a security marker in a credit card, and they figure out ways to change their environment to expose the hidden words. But light, liquids and other plans all come to naught. Soon enough, the candidates begin to uncover each other’s background, prejudices and hidden agendas. Tensions rise as the clock steadily descends towards zero, and each candidate must decide how far they are willing to go to secure the ultimate job .

Exam by no means is a horror film, but it does present an underlying tone of horror that is hard to place but is seemly fueled by human emotion and an enigmatic situation. The situation is nothing really new. In the sense that the theme of a group of people selected to participate in a test that involves 1 room, a facilitator that offers little to no real explanations and a circumstance of time. This scenario is one that I can probably name off several films that rely on a similar setup.

An early one that leans more towards the scifi side of things is the film “Cube”. Perhaps a hint of “Breakfast club”, “House of 9”, “Aquarium” and a few others that escape my recollection at the moment. Regardless, the experience is about a situation and the way the folks within respond. 80 minutes are given with specific narrated instructions that the participants answer 1 question with 1 single answer. Each was selected after ordealing strict pre-selection terms that were never really discussed. All we know is that a test has been given and each participant faces 1 sheet of paper.

Unlike similar scenario films, this group of folks are all here for a job that promises to be more regarding upon selection than anything they could imagine. Each comes from a different background, a different race or more appropriately a different test subject all together. A professional nature and a corporation overtone is clear from the start that sets the tone for these selectees. Upon turning over the paper, they find a blank side. No question, no writing, no hint of what the next step is. A guard occupies the room that removes those who disobey the orders given. Don’t ask the guard or facilator questions, don’t leave the room, don’t soil the paper and meet the test within the allotment of time given.

Oh ya, there are no other rules, law or terms given to complete the test. This surprise forces the group to work together, to suspect , to question each other and try and determine the main objective. What works for this film is a range of character traits that keeps the mystery and the interaction dynamics interfacing. A few calls are made as to scientific solutions in perhaps reading the paper and a few alternatives are tried. 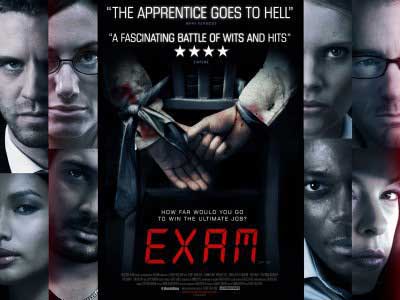 “Exam” succeeds in keeping a high level of suspense that also keeps the viewing audience glued to the story as a participate themselves. I found it not too uncommon for viewers to start pre guessing the outcomes and also making the experience as a watcher engaging and participating. The sense of big brother, high paid viewers and perhaps a betting match are also taken into consideration though what what surfaces is a film that in itself also follows the time frame with a countdown of assumptions. 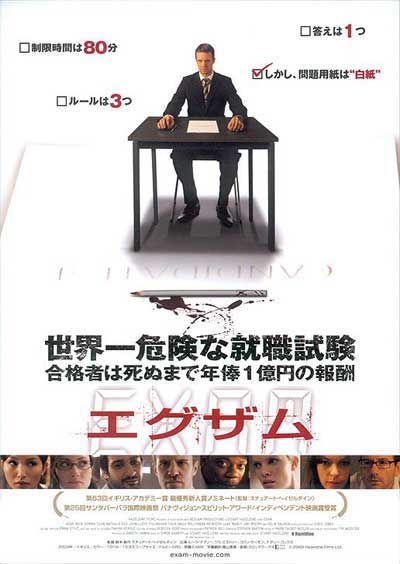 “Exam” is directed by Stuart Hazeldine, written by Stuart Hazeldine with story by Simon Garrity. It stars Adar Beck, Gemma Chan, Nathalie Cox, John Lloyd Fillingham, Chukwudi Iwuji, Luke Mably, Pollyanna McIntosh and Jimi Mistry. The character names are all assigned early on as classifications. Such as white, black, deaf, blond …etc. Luke Mably provides the most dynamic role as “White” who quickly becomes a narcissistic leader role bent on winning at any cost. All performances are well executed and appropriately diverse enough to distinguish between characters. Colin Salmon is the facilitator who clearly states a rehearsed speech of rules and terms to determine a single winner. His speech is short but stile important to the solving of clues. 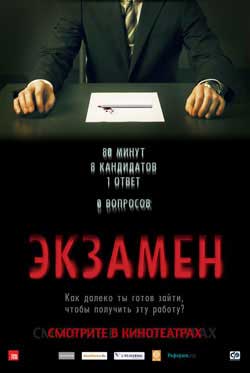 The height of the film is the mystery, the interactions, and the enigmatic environment. In fact, the film is set within 1 single location, 1 set, and for that matter one purpose. I highly recommend this well written film that is easily one of the better films I’ve seen as of late. The only thing more frustrating than the circumstance is hoping that the film offers a true resolve that fulfills your curiosity. 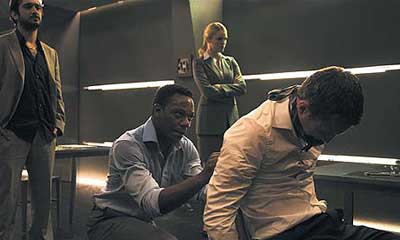