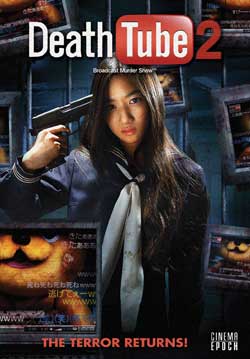 Somebody is playing a sick game with other people’s lives, live on the internet on a web based show called “Death Tube”. And to make it even sicker, people can comment on the deaths while watching from their computers. Now eight captured people must co-operate if they want to escape their imminent deaths..live on the internet.

He calls himself “Ponchiki” & he’s a happy looking animated teddy bear wearing a beanie. He’s also the host of a “Game” he calls “Death Tube”. The Black Saint is back & is here to give you the lowdown on Ponchiki & his antics in a film called “Death Tube 2”. Now to be honest with you, The Saint has never heard of or seen the first film so I was going into this blindly. Immediately I thought of the “Saw” series as soon as this film started. Ponchiki has eight people in different rooms & gives them three minutes to find a secret hidden door to escape their rooms. If they open any other door in the rooms, he warns them that they will die (remember the door he wants them to use is hidden). He also warns them that if they do manage to find the secret door, they must get along & emerge in “Lock Step”, if not…they die. Jigsaw has nothing on Ponchiki! All of the victims have monitors in their respective rooms with microphones & webcams attached so that they can communicate & hopefully cooperate with each other. One dingleberry, not believing she’s on Death Tube promptly opens up the first door she sees, goes back to the webcam to happily wave goodbye & is then promptly bludgeoned by a wrecking ball. That’s right…I said a Wrecking ball. WHAM! Right in the kisser she gets it. Ponchiki then reminds the remaining seven that he said the door was “Hidden” & now they only have two minutes to find their respective doors before they die as well.

As the film begins, it focuses on one of the victims in her room. A young schoolgirl still in her uniform. She finds her way out by tapping on the walls until she hears that one is hollow. Then she finds a button that once pressed, opens the secret door. She then relays the information to the remaining six victims & hey find their way out of their rooms. Once out, she follows a series of arrows pointing her to another room, a larger one where all of them enter. When they get there they see a monitor on a table in front of them counting down the seconds. As they watch the clock go down to zero they think that they have all escaped. After all Ponchiki gave them 3 minutes & they all made it with a few seconds to spare. One of them, believing it’s over begins to celebrate when suddenly, a bullet goes right through his brain. Apparently, he didn’t leave the room in “Lock Step” which means right foot first. He left his room with his left foot taking the first step, so BOOM! another one bites the dust. But who the heck knows what “Lock Step” means anyway? Unless you’re from Germany perhaps. The Saint probably would’ve gotten his brains blown out too. So now there are six of them left and the film is officially a “Saw” clone. But up till this point the traps haven’t been so tough. More like riddles actually…not traps. Still interesting nevertheless. Now it’s time for what Ponchiki happily calls “Game #2”. Now my unfamiliarity with the first “Death Tube” came into play here because the remaining six know that they are on the show & seem to believe that they are doomed no matter what. The Saint has to find the first “Death Tube” film to see how this whole mess started.

Ponchiki announces to them that he’s going to introduce them to his “Little Brother”, upon which a curtain opens up & a large version of Ponchiki is sitting on a small table. His name in “Poncharo” & Ponchiki happily introduces him as a bear with a “Gentle personality & excels at sports”. At this point, Poncharo gets up & starts to maneuver his way around the table turning his back to the remaining six. They are warned that if they come within a five meter distance of him, he will shoot them. He has repositioned himself now & is facing them, gun in hand. He gets up off of the table to pull the dead body away. Ponchiki then announces what game number two is, musical chairs! Everyone reading this better know what musical chairs is! Oh boy, I’m sure one of you doesn’t & then you’ll write back & will complain that I didn’t explain it. OK…OK, Five chairs are arranged in a circle & music begins to play. The six of them walk around the chairs until the music stops & must quickly find a seat to sit down in. Ponchiki announces that he who does not find a chair to sit in will die. Simple game, deadly results. Our schoolgirl notices a sign that reads “Today’s goal: Heighten The Spirit Of Friendship”. She mouths the words silently to herself as she thinks. You can practically hear her thinking as she looks at the sign, but no matter…the game begins. But before they start, she figures out what was meant by the sign. There is a logic to what she tells everyone but everyone has to be convinced of it & trust her. There’s a lot of tension in this scene & it’s well played by all of the actors.

It’s pretty obvious from this point on that “Death Tube 2” isn’t taking the whole “Saw” mythology too seriously. Whereas Jigsaw captured you & set you up in a trap where even if you escaped…you were physically injured in some pretty serious ways, “Death Trap 2” gives it’s victims silly little games like twirling a hula hoop & some questions ranging from math to Key ingredients in lotion! And when someone answers correctly they all celebrate with high fives like little children, seemingly forgetting that they’ve seen two people die already and knowing that some of them are bound to die as well. I suppose it’s supposed to be for laughs but I didn’t find it very funny at all & really pretty silly. I would not be celebrating the fact that I knew the answer to a stupid question knowing full well that I could be dead at any time at the hands of a man in a bear suit holding a gun or his animated brother who is giving out the questions. It sort of reminded me of the game show “Minute To Win It” in a sense. To make it even sillier, every once in a while Poncharo comes out brandishing his gun & they all run away to keep five meters away from him so they won’t get shot. Silly & trite.

All of these shenanigans are live online & the best part of the movie for me were the comments people were making while watching: “I’m bored, when will someone die”?, “I want the schoolgirl to live”! Comments of that nature were more entertaining than the film to me. Finally, Ponchiki announces that he’s so moved that so many of them are still alive that especially for them, he will let everyone leave if they clear the next game. But then suddenly Ponchiki’s image changes & becomes far more sinister. His voice changes & someone calling himself the “Manager” takes over saying that Ponchiki’s games were way too easy & that the game they are about to play will be challenged in pairs. He announces two names to step forward (up till now we don’t know anyone’s names). Poncharo pushes the pair trough a door & keeps the others at bay with his gun. All of a sudden the comments get much more aggressive. Everybody wants someone to die. At this point, the film gets a little more like a “Saw” film. Not with a trap but with a challenge involving the children of the first pair picked. I did think that the duo were a bit too rational, especially considering the situation the manager has put them in. Maybe it’s because they are Asian & think more rationally than most. But the film did get more interesting from this point on because the captives are now in real physical danger & have to make very hard decisions to save their lives.

The film takes on a more serious tone from here on in & it helped keep my interest up in it. But it also seemed to be padded a bit to get up to a respectable running time. And then it got a bit slapsticky all over again. But the comments from the viewers were always entertaining. Still, people dressed in teddy bear outfits wearing a bra on the outside falling down every few steps & running out of bullets & hitting their gun as if bullets would magically appear is not funny. Once again I found myself getting bored.

I don’t know anything about the first “Death Tube” film. According to IMDB, it was an okay gore movie with a sense of humor to it. I suppose that’s what they were going for here. At one point the film even reminded me a bit of a film called “Cube” & that to me was the biggest problem with this movie. It didn’t know what it wanted to be. A horror film with elements of slapstick? A slapstick comedy with elements of horror? A slapsticky horror film with elements of mathematics? I never really could figure out what the director was going for. Maybe it’s a cultural thing, maybe it was just me but ultimately the film just went nowhere & it did that very slowly I might add.

It just got sillier & sillier with more people running around in teddy bear suits than you would see in a care bear cartoon. All chasing the remaining captives around until the tables are turned. But honestly, I just didn’t give two f*cks at that point. It just kept meandering about looking for the rest of the (promising) story they started out with. They never found it. To continue to talk about “Death Tube 2” is just about killing me so I’m just going to wrap this up by saying that the constant commentary from the viewers online is far & away the best part of the movie. And by the way, why weren’t the police involved in this at all? If there were some characters trying to help the captives from the outside it might have been more palatable to me. It only makes sense that law enforcement would be aware of someone killing people online & trying to figure out where they were, such as “Saw” did in each & everyone of it’s sequels.

Just do yourselves a favor & avoid “Death Tube 2”. It takes what seemed to be a promising plot into the realm of nonsense. The final twist at the end was just a way to end the movie because I think the filmmakers didn’t know how to end it. awful movie. So so acting, poor direction, a plot that went in 10 different directions at once & a stupid finale might strike the fancy of our brothers & sisters in the Far East but it just doesn’t cut the mustard here. The Black Saint gives this turkey 1/2 shroud for the entertaining comments running across the screen. Avoid at all costs unless you have trouble sleeping, then it might be worth your while. 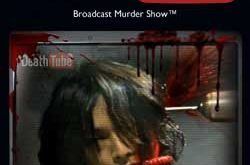