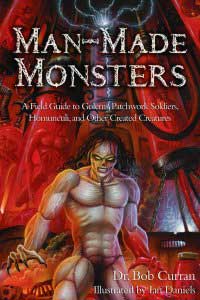 Bob Curran is my hero. He churns out these monster books like they were written in his own blood and spilled onto paper with the frequency of an active volcano. And best of all it is not your typical brand of recycled goods. It is smart, focused and informational, all in one. We have seen Bob take on vampires, ghouls and werewolves with new information that Van Helsing might even learn a thing or 2 from.

This round he has called his latest offering to the masses “Man-made Monsters”. The title might confuse a reader or 2 if you didn’t know what he meant by this classification, but it’s apparent that Bob has some new discoveries up his sleeve. Perhaps, these things that we look at like monsters and fantastical beings are based partly on truth, legend and a combination of thereof.

It is thru Bob’s studies that we can start to make the connections. Some of these facts may be familiar and some may be new information but in the very least, it is a smaller compendium of focused studies. Frankenstein, a much heralded horror icon is brought into greater reveal thru the creators of his fiction and the suggested offshoots that his story has evolved into. We tend to forgot that we emerged from a time of paranoia and influence that as since been washed over in cinema and theatrics. Though it is explained that religion may have influenced the creation of monsters both metaphorical and physical to scare and frighten its believers with ultimately a controlling hand.

Why, would man do such things? All one needs to reference is the recent film, “The Village” which sets up fear inducing folklore in the interest of controlling its community.

You might ask yourself, have you ever heard of a “Mommet? And what do you mean they were built from wood and tree parts? Well I’m sure those 2 guys from that supernatural show are up to speed, but the rest of us consumers might benefit a bit from a little historical push in the right direction. In fact the subject of human originated monsters seems to fall into the same bowl as cloning, fringe experimentating and reanimating the living dead . But wait there is more, alot more…. as Bob takes us thru his flashlight tour of what is and what was. It is us to the readers to decide which aspect or revelation might temp us to dig a bit further into these things of dark nature. There is quite a bit of research done on this “Golem” character who seems to have weaved in and out of popular folklore reading. Though is the idea of creating a super race of soliders who feel no pain much different in the scheme of things? Monsters….real, imagined or bio constructed…they are still monsters.

As it is put, we are destined to play god and out of that creation will ultimately surface the origin of monsters. We may not stick bolts on the neck of the dead, but isn’t the idea of creating living things from mere cell levels a nod in the same direction? Bob gives us a healthy dose of Greek mythology, beasts from other cultures and even a taste of alchemical delvings from histories unknown reports. While it may not seem like a relative subject, he also brings in a bit of the secret society mysteries. It may just be that the connection of secrets is right in line with the creation of dark things that lurk in dark places. If you are a fan of the series “Sanctuary” this little ditty will feel right at home.

Consider this an introduction to the ideas of wandering hosts and evil science rather than a full blown encapsulation. It might be enough though to keep you awake at night knowing that something still lurks even after the TV has gone quite. Special mention goes to the work of Ian Daniels who really gives the text flavor with his eerie illustration work. It’s nice to see what is being described, it is also shocking to visualize these creepy denizens of man-induced nightmares. It probably goes without saying, but you’ll want to pick this up as a great companion to his other works about zombies, werewolves, dark fairies, vampire and his evolving collective of future creature tributes.