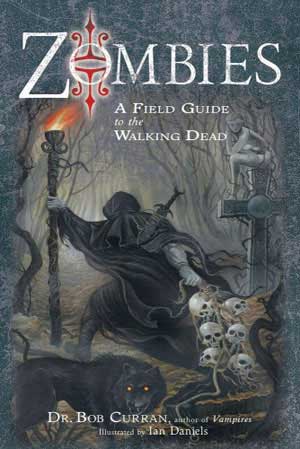 Bob Curran is a busy guy, with several releases under his belt, the one thing Bob has spent time with is the undead. Not literally so much as his passion for research and historically studies. When you see a book called “Zombies” of course your instant thought is TV / Film zombies. Though Bob does an interesting thing. He takes on what history says about the undead. From myths, legends and counter culture understandings we are given a tour of what really has gone down in the historical sense of zombisim This shouldn’t be a bad thing as we all know zombie books have exhaustingly covered every film zombie we can think of in much repetition.

No, we are gearing up for a more metaphysical journey that Bob leads us through. How would one explain the reports of the grandfather who like to return once a year to sit in his chair in front of the fire during family get together’s? Perhaps a ghost would be the first choice, or a living zombie that is caught in repetition. I know my camera and video recorder would be shooting away as well as the team from Ghost Hunters, but that is now and this was then.

Does the idea that “Jesus Christ” was a zombie sound that absurd? Well by definition it sounds like it’s a match, just not in the sense of flesh eating monsters.

What is the significance in the undead and how they relate to the living? Does this tell us a thing about after life or is it strange magic in motion? Our tour includes ancient times originating from Babylonian, Egyptian, Celtic and Sumerian. Legends cover the areas of Hebrew, the middle East, China, Europe and several others.

We are given background on the life giving elements such as water, the pursuit of the fountain of youth or “vessels” for holding water such as cauldrons and how they were looked at by ancient religions. (they were associated with full stomachs, well being, life and vitality) How about the significance of the Holy Grail and its reported powers to those who drink from it. How about the Draugr? These creatures known as the walking dead originated from Iceland from powerful magicians who returned from the dead. Many tales such as these seemed to have come from great sagas that originated in the 11th and 12th Centuries. While other beliefs are pulled from German folklore and Medieval times. Egyptians seemed to take the undead very seriously which prompted the need for mummification. They were true believers of the afterlife and so it was common to bury treasures with the dead in hopes of having a wealthy afterlife in return.

Voodoo an African based form of undead magic is a whole book itself filled with zombie folklore. Primarily based around old way medicines much has been written and covered in the ways of films and literature on this particular area. The most intriguing is a potion that produces all the effects of being deceased while the person is in a state of coma and paralyzation which was featured in the movie “Serpent and the Rainbow”

Other areas of coverage go into subjects that deal with the dead themselves such as grave robbing and body snatching which at those times had somewhat a allure to thieves looking to sell parts and buried treasures from the dead.

The supernatural happens to stretch the boundaries of all known and unknown through out history. Zombism is just one aspect of that but as its apparent from Bobs research it has been covered in numerous ways and carried down in belief systems worldwide.

Ian Daniels provides excellent illustrative accompaniments through each chapter. Primarily pencil work, his art provides a nice addition to help visualize the content within. A fine book of the undead that gives you more than just the latest Hollywood take on the theme. In fact you’ll recognize the influence that these covered areas have really had on the film industry in general from motion pictures to TV series. A great reading companion to those seeking beyond the simple fiction.