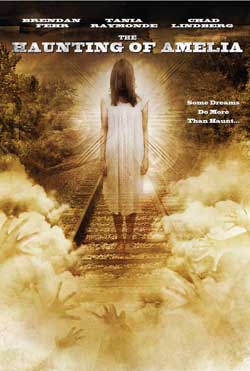 Ten years after a tragic train accident killed his girlfriend, Josh finds himself haunted by disturbing visions from somewhere between the world of the living and the dead-haunting memories that keep him from moving on. His buddy, Rusty back in town for their high school reunion, tries to wake Josh from his painful past, but a mysterious young waitress offers a seductive alternative.

I was beginning to wonder what Josh’s (Brendan Fehr) function was, as he monotones his way thru the first 3 acts of the film. Younger than who he portrays, stuck in a Midwestern town and seemingly addicted to his job in life as a pizza flipper….. Josh, by most standards is a pretty dull dude. It’s when his old friend Rusty shows up in town in the interest of a high school reunion that things begin to perk up a bit. As much as Rust y tries to keep his old friend entertained and somewhat active, Josh seems content in his nowhere life living within his beaten down old house and a troubled past connected with his old girlfriend. Emily, the one who has kept him in this somewhat frozen state appears to be back to haunt him. Though the filmmakers have decided to throw in a loop hole and mix the living with the dead.

As Josh, loyally makes his way back the pizza joint that never seems to have any customers, a young lady by the name of Amelia comes a calling with an interest in the waitress job. Though its assumed pretty quick that the job is really not what she came for. The 2 hit it off right away which by any standard wouldn’t be too much of a stretch with hottie Tania Raymonde playing the role of Amelia moving in on Josh right away. It’s a mixture of life and death that seems to enter in the mix with some messages embedded in along the way. We tend to hear more than a few times, that Josh needs to move on….move..on and move on. Though he is also a suffered ex boyfriend who can’t let go of his girlfriend and her death. Rusty, Amelia , Josh’s mom.. they all seems to repeat this same message to the point of , ya we get it. 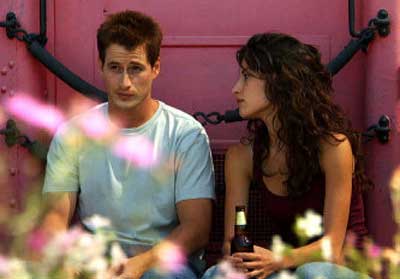 It’s not too hard to figure out that something’s up with the whole situation and that Josh is going to have to make some life choices to move forward. Now the thing that struck me right away was where do I know Chad Lindberg from? As a familiar face its didn’t take too long to figure out that he “was” a former key player in the “Supernatural” series as the techno genius Ash.

The movie arrived originally under the moniker of “The Other Side of the Tracks” which probably was changed to gain more of a horror based interest. Now I won’t argue that the film has some creepy ghost moment here and there with a few ugly corpse appearances to validate a horror category but most of the movie was more of a coming of age drama. Not a bad dram at that even though the Josh character was a little too tightly wound for my character tastes. But when you get right down to it, there is more buddy bonding and fleeting love story action here than a real shocker of a horror film. So those who take the plunge, know that the horror element is more on the down low. Actress Tania Raymonde is a regular player from the “Lost” series who lights up the screen with a seductively but coy performance that might have most guys wishing they had a ghost like her knocking down the doors. 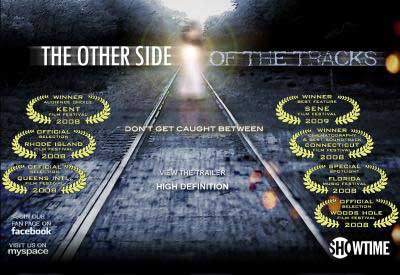 Now to be fair, I will say that there may be a few holes in my review as the film kept stopping and skipping a bit, due to a faulty burn. Though regardless of technical difficulties, I still stuck thru it. That has to say something about the film. It’s a safe bet to light horror fans and says alot about small towns and a need to grow past your surroundings. The Haunting of Amelia was written and directed by A.D. Calvo who like many filmmakers I’ve been reviewing lately got their start in the short film circuit. Not much in the scary realm but its not bad either.

Tags A.D. Calvo Beatrice Rosen Brendan Fehr Chad Lindberg Tania Raymonde The Haunting of Amelia The Other Side of the Tracks