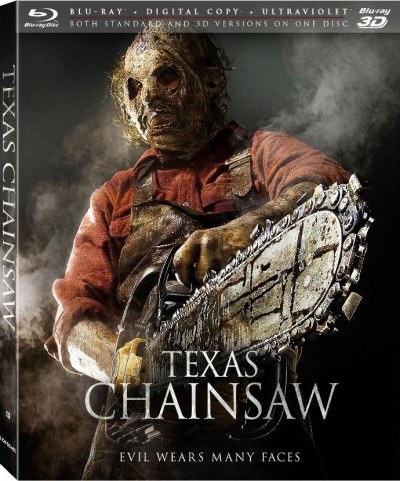 Twenty years ago the town of Newt, Texas, exacted vengeance on the Sawyer family for their role in assisting and concealing murders committed by the chainsaw-wielding maniac Jeb Sawyer, aka “Leatherface”. The entire family was presumed killed when Burt Hartman led the townspeople to burn down their farmhouse, but the Sawyer infant survived and was secretly taken away by two of the vigilante townies, Gavin and Arlene, and raised as their daughter, Heather.

It’s not until she’s in her twenties that Heather learns that she’s adopted. A lawyer for her grandmother tracks her down with word she’s been left an inheritance. Angry at her parents for lying to her, she sets out for Texas on a road trip with her boyfriend, Ryan; friends Nikki and Kenny; and Darryl, a hitchhiker they pick up on the way.

Arriving in Newt, Texas, Heather is shown to her grandmother’s house by lawyer Farnsworth – and is shocked to find it’s a massive and opulent mansion. While the others get food at a local store, Darryl explores the mansion and inadvertently frees Leatherface from a sealed room — a mistake he will soon regret.

You know the idea of yet another remake/reboot/sequel to Tobe Hooper’s masterwork, “The Texas Chainsaw Massacre” (TCM from here on) was absolutely abhorrent to me. When I first heard of it I had the idea that this film was being presented to a unsuspecting populace in 3D I just knew that this was one of the most shameless money grabs Hollywood has foisted on the teeming masses as of late. But what do I know? Maybe, despite my anger at it’s very existence, “Texas Chainsaw 3D” would actually be something halfway decent?

Yeeah, and Jessica Alba has my number on speed dial! “Texas Chainsaw 3D” is by my count the 134th remake/reboot/sequel to “TCM” and wouldn’t you think that the f*cking baboons at Lionsgate had an original idea or two laying around somewhere that might merit the $8 million dollars they spent on this? I sure do and quite frankly I’m insulted by the fact that this film even exists. Enough is enough already, I’m sick & tired of all of the needless remakes, reboots & sequels to films that should’ve been left alone in the first place.

But I digress. Lets talk about the actual movie for a hot minute here, shall we? “TC3D” stands apart from the other 133 “TCM” films by beginning mere minutes from where the original film ended. This means that we get to see some footage from the original film over the opening credits in 3D (Which actually wasn’t too bad). And right after Sally (Marilyn Burns) jumps in the back of that truck & mocks Leatherface as he pulls a chainsaw swinging hissy fit in the middle of the road the film cuts to a sheriff pulling up to the Sawyer house demanding that Jedediah (Yup! Leatherface has a name people) surrender himself to the authorities. It seems that Sally made it back to civilization & reported on Leatherface & his clan’s tendency to butcher passersby for food. The family patriarch, Drayton Sawyer (Bill Mosely), refuses to give Jed up though. After all, he is family isn’t he? But as the situation becomes increasingly tense his fellow family members convince Sawyer that maybe they should give Jed up. After all he is simple minded isn’t he? Just as Sawyer agrees to give in to the sheriff’s demands, a group of armed townfolk drive up with the idea that they’re gonna lynch Jed up right on his front yard. At that point the Sawyer clan decides that not only will they not give them what they want, they’re gonna fight back. This only lasts a few seconds though because a few Molotov c**ktails are tossed through their window and with no means of escape, the entire Sawyer clan burn to death in their house of horrors.

Or do they? Among the Sawyers in the house are a young mother and a baby. Shortly after the house is burned to the ground and it’s ashes being sifted through by the townies, the young severely burned mother and her unharmed infant are found hiding behind a car around back in what looks like a car port. The man who finds them kicks the poor woman to death & takes the unharmed baby to his wife, who conveniently cannot have children, and raise the baby as their own. Cut to 2012 and the baby has grown into a especially attractive young lady named Heather Miller (Alexandra Daddario). We’re introduced to Heather at her place of employment, a supermarket where she’s found gainful work as a butcher of all things! Who would’ve thought that would happen?

In the following 10 minutes we meet Heather’s best friend, Nikki (Tania Raymonde), her “Parents”, Gavin & Arlene Miller, Her boyfriend, Ryan (Trey Songz) & his friend Kenny (Keram Malicki-Sanchez). In these 10 minutes Heather also finds out that her grandmother has passed away, the grandmother she didn’t know existed. Her parents tell her she was adopted and she gets dressed, gathers her friends together and drive to Texas! She has to “fill out some forms” you see. That and receive her inheritance as well and that turns out to be a gorgeous mansion, fully furnished and all hers to live in for the rest of her life! The lawyer waiting for her when she arrives gives her a letter her grandmother, Verna (Marilyn Burns…again)! leaves her with explicit instructions to read it immediately but you just know that ain’t gonna happen straightaway.

That’s too bad because among the bits of info her granny leaves for her in the letter is the fact that her cousin (Jed AKA Leatherface) is still alive and kicking! And he lives in a part of the house that’s locked away so he can’t be bothered. Oh yeah, he still goes out every so often for some fresh meat and all Heather has to do is “Tend to his needs”. Y’know, do his dishes, wipe up after him…stuff like that. Of course this all ends badly for all involved but the question I have is why did the writers decide to make our favorite skin mask wearing nutjob a sort of anti hero in this film? And why do they think that we’re so stupid as to not notice this film’s amazing lapses in logic & common sense?

First things first, since this film takes place directly after the original that means it begins in the year 1973 and then fast forwards to 2012. Since Heather was a baby in 1973 this means that she’s about 38 in 2012…right? Normally this shouldn’t be a problem but since they cast Daddario (Who looks to be about 21, 22 tops but she’s actually 26) believability was obviously something they just didn’t give two figs about. This would make Leatherface what…about 80 or so? He’s pretty spry for a old man with a skin fetish and a chainsaw. Continuing on my list of WTF moments, in the beginning of the film when Loretta (Dodie Brown) & her baby are found behind incinerated Sawyer home, didn’t ANY of the men who burned down the house even notice the very large area with a few parked cars in it that was not only untouched by the (Very large) fire but literally 15-20 feet in front of them? Didn’t any of these chowderheads notice Gavin rushing towards his car from that very area with a crying baby which he hands off to his wife who’s waiting in a truck right in front of them? Of course not! What kind of movie would this be if anyone could do stuff like…see?

And the c**kamamie idea of making Leatherface some sort of anti hero is just plain stupid. Once Heather finds out he’s her cousin…well that makes him family don’t it? And family always comes first, never mind the fact that he peels the faces of of his victims so he can wear them. You’ll just have to see the film to understand what I’m talking about here but if this is the best that four (!) writers can come up with then I’m really in the wrong business. I can write this kind of crap in my sleep, some would say that I already have but that’s another story. The bloodletting doesn’t really kick in till the second half of the film and while it’s not as over the top as I would’ve expected, it is pretty effective. The 3D is completely unnecessary but there are a few cool shots of chainsaws slowly coming right out of the screen that are cool enough I suppose.

Alexandria Daddario is some kind of Porcelain skinned goddess, She is indeed quite lovely to look at and she can act a bit as well but all that’s asked of her here is to look distressed or perturbed and making sure her shirt reveals just enough of her impressively flat belly so that we eventually can’t take our eyes off of it. Don’t even get me started on her (Really impressive) boobs. Somehow they manage to stay covered, barely covered, by whatever shirt she’s wearing which is always almost completely unbuttoned. I don’t know who Trey Songz is (Apparently a singer of some note) but I do know the girls in the audience squealed with delight when he made his first appearance in the film. This might make Mr. Songz happy except for the fact that when he made his exit those same girls (And nearly the entire audience) cheered with delight! He’s not exactly what I would call convincing as an actor, let’s leave it at that OK?

As Leatherface, Dan Yeager has the right amount of heft but since the writers great idea is to make him nearly lovable here, he’s pretty much trapped in a situation that he can’t chainsaw his way out of. How do you attempt to make lovable a character whose favorite thing to do is butcher humans & eat them? Even if it was possible, is it a good idea? I didn’t think so either.

But I will admit that I couldn’t hate this movie as much as I wanted to. Maybe it was Daadario’s pendulous bazoomboos? Maybe it was me having fun keeping track of all of the situations where bystanders witness something completely ridiculous happening in front of them and continue about their business as if it’s a normal thing to see a 6′ 5″ chainsaw carrying, blood splattered behemoth cutting through a chain link fence surrounding the carnival they’re all attending as he’s chasing after a blood splattered young lady with really impressive boobies? Maybe I just have a soft spot for boobs & cannibals? I dunno, but as stupid as it is I didn’t hate this film, and I wanted to hate it so badly people. 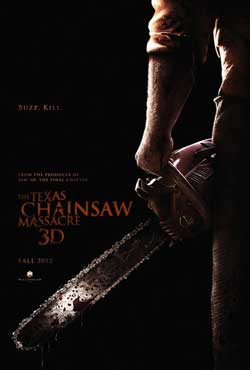 Ten people are listed as producers here which just tells me that a bunch of people (Tobe Hooper included) felt like they got shortchanged monetarily from the first film and are trying to get some payback. Nothing wrong with that but couldn’t they have given us a better movie? Why take out their frustrations on us? I wonder how much Tobe got paid for his blurb that’s plastered over the newspaper ads for this calling it “Terrifying”? He oughtta be ashamed of himself…he really should. But in the end I can’t tell you that you’ll hate this movie since I didn’t (And I tried). If you do “Treat” yourself to this then hang around until the end of the credit roll, something happens afterwards that while still stupid, is mildly entertaining for a second or two.