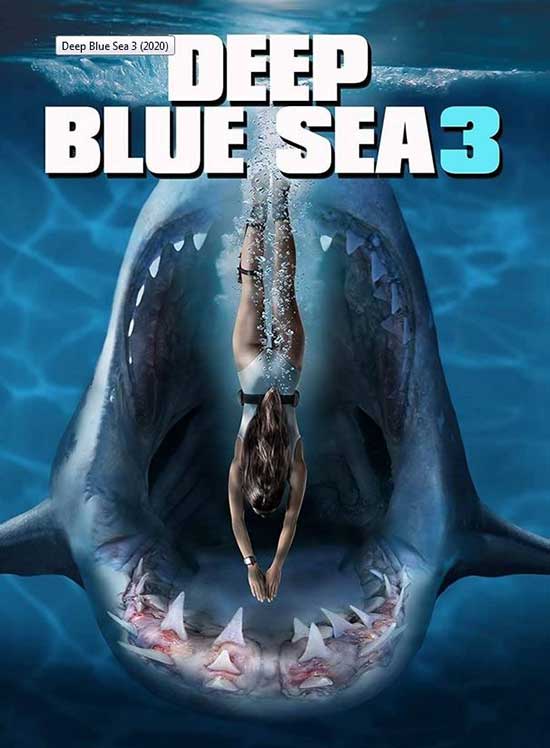 Studying the effects of climate change off the coast of Mozambique, a marine biologist and her team confront three genetically enhanced bull sharks. Now, a new bloodbath is waiting to happen in the name of science. Will humans never learn?

Here is an open request to Warner Brothers: For the love of all that is decent, no more “Deep Blue Sea” sequels. Haven’t fans of the original been abused enough?

Once more, without being asked by anyone except for, maybe, investors, Warner Bros. have dished up a second sequel to the fairly entertaining original film. For those who may be worried, let me assure you that the third film IS better than the insultingly stupid “Deep Blue Sea 2”. Unfortunately, that is akin to saying having your finger crushed is better than having it cut off. In the end, you really don’t want either one.

Welcome to the mostly abandoned island village of Little Happy. It looks like a shanty town built on a floating trash pile, but that is probably due to the low-grade CGI. Who really cares as we only see a small handful of buildings being used by the 6 people still on the island? Oh, right, we have to show how global warming is slowly swallowing the island. Don’t forget that underlying theme of “Mankind is bad” as you will be slapped with it throughout the film, along with a few other progressive messages.

The place is home to a marine biologist, Dr. Emma Collins, and her crew. They are studying the effects of said global warming on marine life. They also host a video blog of their work. So hip and stylish. One character states that a post of Emma making nice with what seems to be a pet great white shark will net at least 5000 likes. Let’s hope their funding doesn’t come from clicks on their vlog.

Shortly after we are shown what an empowered person Emma is (I guess being rude to your employees is a sign of strength now), we meet a ship full of weightlifters – no, sorry, divers, who are tracking 3 bull sharks. The USS Beefcake is headed by Richard Lowell, Emma’s one-time flame who left a bad taste in her mouth after some questionable dealings when her father passed away.

Isn’t this all so wonderfully convenient?

These sharks are super predators due to global warming. At least, that is the initial story, and who is Emma to question any of this when her pet peeve may be the cause. If you saw “Deep Blue Sea 2”, you know what the real deal is, but, if you didn’t, there is a lengthy bout of exposition dumped in your lap later in the film to link all three movies together.

Ignore all of it because if you choose to watch this film, you don’t really care about the plot. You want that sweet shark-eating-people action. You get some of that, after you wade through endless dialogue that is unrealistic delivered by smarmy and unlikeable characters. A bit of red clouds in the water, a touch of entrails, and a severed limb or two. It feels almost like the scenes shark fans tune in for were added to keep folks from demanding refunds from the VOD providers.

I cannot really say anything too rough about the actors given the tedious and unappealing nature of most of the characters they had to play, though I will say that Bren Foster seemed to enjoy playing Lucas as total dick of a human being. Everyone else just hit their marks.

To be fair, I want to give proper credit to the real stars of this film. The underwater photography and the diving crew in this film deserve recognition for the extensive work they put into this utterly lackluster dose of predictability. Unlike the second film in this series, “Deep Blue Sea 3” features some truly beautiful shots of marine life as well as having the characters in the water on a regular basis. The people who did all the underwater work are often overlooked, along with the stuntpeople. Here, they make the film come together. Without them, this film would have been unwatchable.

There are those out there who cry foul when a movie like this is given a bad review. “What do you expect from a shark movie?” they say. I expect to be entertained as well expect to be given characters that somewhat feel like real people who work through a plot that does not telegraph its every “twist” in a heavy-handed fashion. “Deep Blue Sea 3” fails on every count.