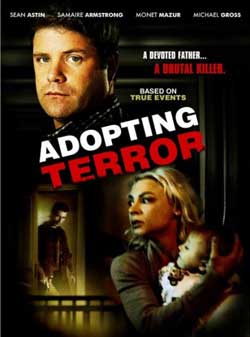 Tim and Cheryl Broadbent are excited to finally adopt Mona, a beautiful baby girl until the baby’s biological father starts stalking them, and their world turns upside down, through intimidation, manipulation, and violence, he is determined to take his daughter back.

With a title like “Adopting Terror”, one could perhaps assume that this film was a B movie. I can assure you, it is no B film. It deserves a grade much, much lower. 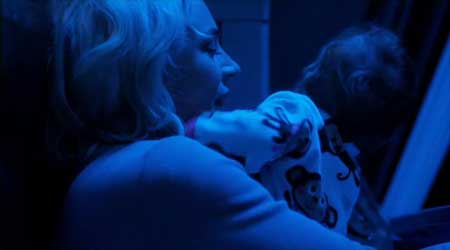 A knock on a motel room door by a social worker looking to take an abandoned baby girl into protective custody is met by gunfire from the baby’s demented daddy (turns out she wasn’t so abandoned after all). The baby girl is swiftly adopted by a kind, happily married, stable couple played by Sean Astin and Samarie Armstrong. Happily ever after is not to be though. Despite giving a lead kiss to a government worker, daddy dearest is released from prison, and he’s bound and bent to be reunited with his daughter.

Not understanding the term “terminated parental rights”, birth dad pushes his creep factor into overdrive and begins lurking about suburbia , not exactly threatening the new family, but certainly scaring them with his menacing ways. This is bad for several reasons for the new parents, one being that they have yet to receive full legal adoptive parent status and are under supervision by a social worker (played by Monet Mazur) who will determine if they are fit parents. Since having a violent man stalk you can be a real stressor, this puts the potential parents chances of adoption at risk. 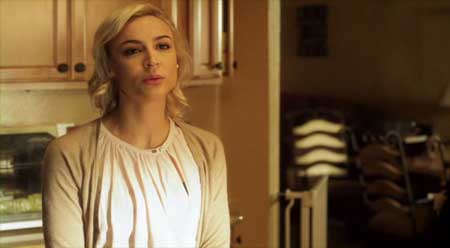 Anyone familiar with the classic film “Cape Fear” and its various knock offs will be very familiar with the threadline of this film: ie, a violent criminal is released from prison with an axe to grind, but his stalking is done in such subtle ways that local law enforcement is powerless and apathetic to do anything. Eventually, the people being stalked are driven to such drastic ends that they in turn begin to seem like the crazy ones and its up to them, not the cops, to square off with the psycho once and for all.

So, other than the adoption angle, what makes “Adopting Terror” different from other “Cape Fear” wannabees? 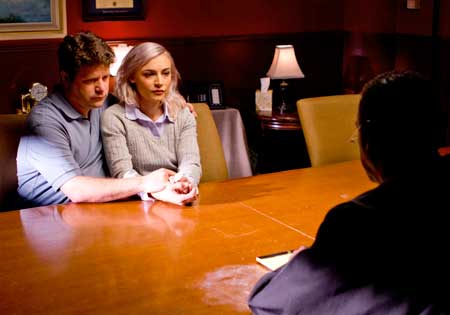 Absolutely nothing, except a twist involving the couple’s social worker that is so obvious and cliche , that the screenwriter should be sent a basket full of basic screenwriting books as a gentle reminder that every “trick” up their sleeve can be seen from a mile away.

This is not a horror film. It’s more of a thriller that isn’t thrilling and has no thrills. The cast, however, puts forth their best efforts, turning in solid performances. Of particular note is Samaire Armstrong, who gives a performance of vulnerable resiliency that is nicely nuanced, but a waste, ultimately in a film like this. 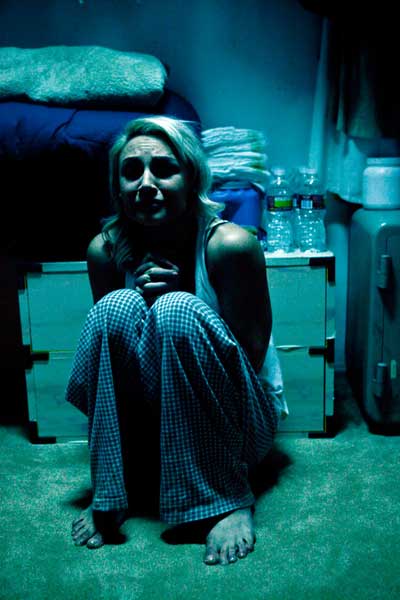 Brendan Fehr, however, as the deviant baby daddy, is the one notably sour note in the cast. I’m not sure how he was cast, or, if in fact he agreed to do this film at all, since his performance comes across like someone knocked him out, placed him on a film set, and when he awoke, was expected to act in a film. Maybe there was some resistance , but he ultimately agreed anyways. Basically, he’s less raging psychopath, and more guy with no personality who is vaguely annoyed.

It seems maybe the director realized Fehr’s acting deficiency, however, and tries make the audience see how scary he’s supposed to be by employing such techniques as: making another character suddenly realize he’s several feet away, watching them, and when the camera cuts to Fehr, we see him, with his feet wide apart, stock still, staring and accompanied by ominous music. 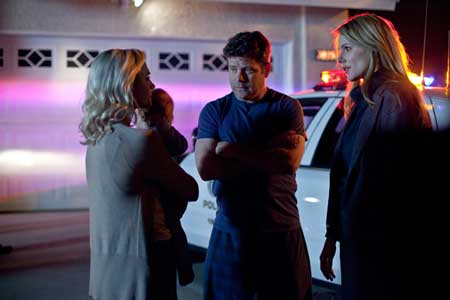 The soundtrack for this film is very much like a wet blanket on the production: it really weighs everything down. Any chance of real emotion being conveyed is ultimately ruined by either music so cloyingly Hallmark commercial esque that its nauseating, or music so relentless and doom ridden that it could give you a headache.

You don’t really want this baby in your home. I say send it back to the video orphanage-your family will thank you for it.