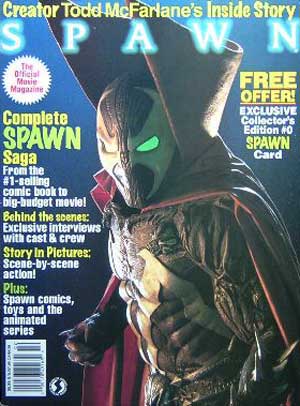 Sometimes when digging thru old books and magazine you come across a few gems. One for me (at least at the time) was the announcement of a “Spawn” movie and an official movie magazine to go with it. I was deep into my collecting phase and had more spawn dolls than any small house should have. The magazine came out in t1997 to support the release of the movie by the same name. As it stands today, even with a 40 Million dollar budget the spawn that emerged was still felt as a let down to the powers that be and has since held up the return of the character to screen.

Now 2009, I hear reports that spawn may surface again in a part 2. The magazine gives a great overview of the film, the production, the actors, the FX and behind the scenes about the legacy that has led to a movie adaptation. Best of all, its chock full of vivid color pics that show all kinds of FX work and movie shots for the fans. I’m really not sure if a “Spawn” movie book ever came out, so this is the closest I could find to it. Now the interesting thing was that even though this wasn’t a “Fangoria” magazine, it was created by the Fangoria team. Editor lists Anthony Timpone with Michael Gingold as the managing editor. Publishing comes from the Starlog group of which supported Fangoria.

The magazine covers alot of aspects on the film. The choice of actors, the comic book that originated the concept and much from the man himself Todd McFarlane. Sections within include: “The Thrilling Story in Pictures” which walks you thru scene by scene (truncated of course) the movie from start to finish. Other sections explore the production and the work that went into it. KNB provided great FX work which really made the costumes state of the art. From the lumbering fat annoying little clown to the statuesque Spawn to the oversized “Violator” all the characters were represented in there true comic book to life form.

John Leguizamo probably found his most fittingly odd role in his bizarre clown suit that really was enhanced by John’s personal touch to the character. Melinda Clarke gets a small feature but there’s no denying her bad girl presence she brought to the character of Jessica Priest, an evolved version of the male assassin from the comic named Jess chapel. Michael Jai White gives a great interview who’s marital arts training and slick moves provided just the juice for the main Spawn character AKA former Al simmons.

The legacy leading up the film is explained in pretty thorough detail. Todd McFarlane talks about his days in Marvel and his future intention to build a world around the “Spawn” character. With his rebel on the run attitude, he did just that creating comics, books, a tv cartoon series and his highly popular line of Spawn doll releases. Early comic covers, and concept art show how Spawn evolved and made his way into the 1997 movie of the same name.

Again its great when they put effort into a dedicated magazine on such a great cutting edge film that even in its critics bashing was alot of fun to watch. Spawn fans may have wished for more but the product still introduced Todd’s #1 character to screen. A cool magazine overview if not tribute to the past achievement.