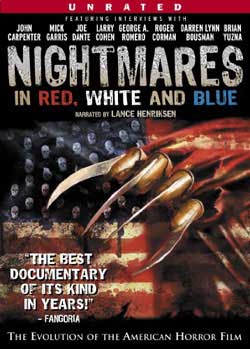 An exploration of the appeal of horror films, with interviews of many legendary directors in the genre.

Nightmares in Red, White and Blue: The Evolution of the American Horror Film
In a film such as this that pays tribute to the horror genre and thousands of clips, it really requires an expert editor at the helm. The editor in this case happens to be one in the same as the director…Andrew Monument. It’s no wonder that Andrew is not only an expert but has a pretty solid history with some serious editing work as a supervising editor for the show “The Haunting”. “The Haunting” has always been in my mind a really slick looking TV show, so that talent has crossed over into his feature film in spades. Why I say this? When you take on a project like this, it of course has to have format, but it’s success often relies on how all the moving pieces are put together. NIRWB is a visual treat to say the least. More importantly, is that fact that it shows that the creators care about horror and want to produce a piece that educates, entertains and is not “just” a scrapbook of greatest films. I got that right away.

The talent on screen are some of the industries best directors who are here to give solid commentaries on the history of horror that really hits home. These are the guys making the best of what we call horror and so their opinions mean alot to me. Very quickly, is the list of featured talent: Darren Lynn Bousman ,John Carpenter  Larry Cohen ,Roger Corman ,Joe Dante , Dennis Fischer,  Mick Garris, Lance Henriksen , Tom McLoughlin, John Kenneth Muir ,George A. Romero, Anthony Timpone and Brian Yuzna. Ya not too shabby at all.

Lance Henriksen narrates which makes the ride that more credible. For starters we get an incredible edited showcase of pieces and motion graphics flying in and out that do so with a pre thought sense of rhythm. The clips themselves come from goggles of films, that probably speak to most of us more, than not.

The sections are divided on important trends that contribute to the makeup of the films content. It’s’ interesting some of the choices the speakers pick out as influential ranking from early Disney cartoons, war films, B-grade horror, to even the concept of returning war heroes who didn’t all come back in 1 piece. The mind set was changing and early films such as Caligari and Nosferatu were there to open doors to new ideas and perceptions. As the film itself progresses it takes us thru the changes in horror genre, filmmaker mind sets and the trends leading up to today’s level of horror. This is complimented by the directors who comment on why things have changed and what in society has lead to these changes. The 80’s being more experimental, campy, gory and camp-gory creating a whole new trend of horror that was attributed to the video “need” craze. This of course became a style that evolved as society found itself faced with darker times of war, the local news and the changes in people’s perspectives. While it all makes sense, it also has set the base to where we are now. More extremes, more money to invest, better special effects and changes in technology that have all formed a new interpretation of modern horror. We have grown to appreciate more common icons than ever that have lead the way into a current state of darkness like none before. 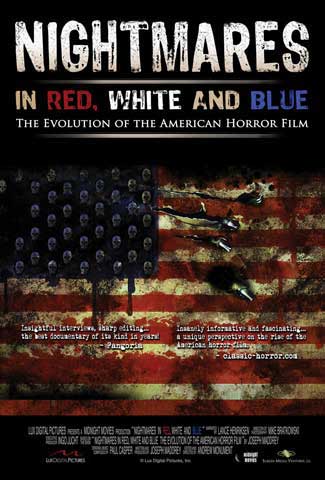 Nightmare in Red, White and Blue takes over where past documentaries style films have left off.I enjoyed every second and found the director commentaries entertaining and educational. A really kick ass compilation and best documentary overview I’ve seen this year!

Nightmares in Red, White and Blue: The Evolution of the American Horror Film