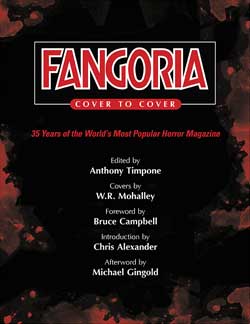 Being a mainstay in horror is quite an accomplishment. Fangoria arrived onto shelves back in 1979 in an era when we had only “Starlog” and “Famous Monsters” (on the most part) to look forward to for our updates in horror. Now while we appreciated what these magazine could provide, there was also wide gap left open that lacked the more R-rated releases we were about to be graced/inundated with. The 80’s was just around the corner with a whole new genre of nasty films that we were hankering to find out more about

This was pre-internet before there was a Google, web sites or competing magazine to compete with. Each of us who hold horror dear to our beginnings remembers first seeing this new magazine hit shelves. “That Godzilla cover” that at first suggested a Starlog direction but that won over fans with by covering the release of “Dawn of the Dead”.

We weren’t used to seeing gore in magazines on “this” level. Many of us were still too young to get into theatres making Fangoria an immediate outlet resource for absorbing some of the incredible special Fx and monster creations being used. Yes, things were about to change….Fangoria set the new tone for this.

An introduction was essential for the review of this new hard cover release titled “Fangoria Cover to Cover”. Some of us were lucky enough to save many of the issues over the years, but it’s safe to say that alot of us saw them succumb to wear and tear and deterioration. I distinctly remember the covers since they often served as a preview of new things to come down the pipe. Whether you remember the days of the “film-strip right panel” or are more privy to the multiple re-designs the magazine underwent, we lived for the content.

This release is a homage of sorts that features all the covers up to current publishing (Feb 2014). Usually this kind of tribute would reserve itself to an “end of era” run that showcases a collective in whole, but as it goes, Fangoria is still doing what they do best….pumping out issues of glorious horror content for fans all over the world…….so it may just serve someday as a volume 1?

The hard cover makes for an “essential” collective of cover work. Fans can actually see and experience the trends as they changed over the years announcing new films that were on their way to theatres and shelves. It’s a trip down memory lane and a tribute to the hard work the staff put in over the decades serving as an example of impressive magazine design and content coverage. The book begins with introductions that give us insight into the changes and years leading up to this publishing.

It then proceed to list all the magazines, issues, dates, and content summaries before leading us into the full cover pages of covers 1979-2014.

Complaints?
Well …I know it’s hard to imagine that there be any……….however since I have experience on the print side of things…there was a few observations that should be improved on “if” there is a 2nd edition.

Some of the scans are poor quality and faded ( I would use pages 212 and 213, 233 as an example)
whoever was in charge of cover cleanup seems like they rushed thru some of the middle chapters. This is evident on page 232 where the whites should be white, not gray and the red colors are muted. Jump ahead to page 270 and you’ll see the contrast. Now I know for a fact that the originals did not look like they do on page 233. At the very least some basic color correction is needed….let alone occasionally applying a “sharp” filter to the cover scans (see page 222, …seems kind of blurry)

My advice for Cemetery Dance is to fix these issues on their reprint. At a $50 asking price, AND seeing that CD put alot of pride into the binding and page quality ….these kind of oversights are doing the release an injustice.

“Fangoria Cover to Cover” is edited by Fangoria mainstay Anthony Timpone published under Cemetery Dance Publications. 390 color pages makes for quite an impressive release that “should” be a mandatory buy for horror fans across the globe.

What can you say about an amazing collection honoring an amazing magazine? 2 words come to mind, ……at last!