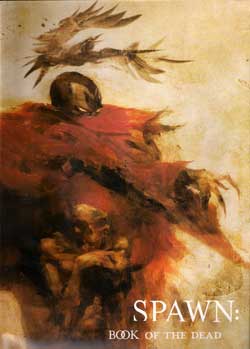 I have the pleasure of finally reading and reviewing a volume …..a long time coming. When I say a long time, I mean I’ve been hearing about this arriving on shelves for seems like decades. I don’t actually remember the official date I caught wind of it, but it was definitely a different time, a different era and most of all Ashley Wood was still creating killer illustrations for the Mcfarlane team. On one hand, we had verse and premise that I’d waited so long to acquire. On the other, I was saddened as this was the time when Ashley Woods art was most effective to me. Since then and since this edition of works, he has gone on to robots, retro and …well I’m not quite sure what you call the rest of it. It’s apparent that it still appeals to some of the fan base, but it just isn’t the Spawn styling and darkness presentation that we were used to. So before digging in further, I’d like to say R.I.P Spawn-version Ashley Wood….you’ll surely be missed.

Now with that little soap box out of the way, we can move on…….

The book is illustrated by Ashley Woods, with story by Steve Niles and David Hine. It documents the story of the creatures known as HellSpawn. As we are told, the saga is a bit of a puzzle held together at terrible circumstances. The epic spans way back even before Adam. A generation would chose 1 human soul that descended into hell to return back to earth with supernatural; powers. This soul would become a member of the “legion of the damned”

We are introduced to Malebolgia, a terrible demon that rose above the ranks in the pits of hell. We are also told about characters such as the “Black Knight” who Malebolgia had special plans for, the 3 sisters of Morrigan, Covenant, Mammon, and then of course Al Simmons who later became “Spawn”

And so it was written, this epilogue brings the historical sage of hell and damnation retrospective with a smattering of appropriately dark, collage-style illustrations that feel as if they were also inspired by the dark lore that the story entailed.

Yes, this volume is haunting in its own right with Ashley W. illustrations that jump off the pages, gritty, photographic, drawn, painted and torn about to be resembled like a maniacal kid who craves imperfection to the result of perfect shadow filled completion. One look at the creepy image of the Clown whose photographic exorcistic face peers thru pencil marks and torn water color paper will make you a believer that the best of times are no behind us to a new wave of artists with different perspectives.

I’m not entirely sure the history of this ditty or why its taken so long to release considering I’d seen much of this art painted “years” ago. Other pieces we’ve had small glimpses of from this or that. At current a quick search didn’t reveal any answers, though I’m sure there are some fans out there who can comment on it’s delay (hmm….please do below)

Even as I type this, I’m not sure this volume is still so easily acquirable. It seems to have gone thru a couple variations and is priced pretty high from Amazon for used copies. From all us Spawn fans and former Ashley fans…….Mcfarlane…what gives?? Can you put this to rest already and get it on the shelves? We’ve been asking for the release for over 10 years and your still sitting on it….Publishers! – I just don’t understand the holdups….our cash is in hand, now sell us some copies.

Final word – This is not only a great addition to the Spawn collection, it is an essential. The book is beautifully dark, ominous, cutting edge, trendy, collage filled and some of the best abstract Spawn art I’ve yet to see. Ashley Wood was in tune with his dark side. There is no denying it. Now before you recycle another 100 of so of the same robots in print, please consider returning to the demons, monsters and chaos…..enuff said.