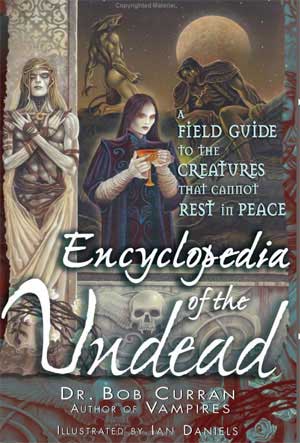 With so many variations of creatures, monsters and living dead monstrosities throughout history, it’s always a pleasure to find books that condense and summarize this information into easy to read novels such as Encyclopedia of the Undead . Being a monster enthusiast, I know days could be spent perusing through old books on legends and myths to get even a small understanding of what has been reported and written here. The good news is, Bob Curran has made life a little easier and a little less time consuming. Interesting enough with the subject matter being astronomical, Bob has chosen to focus on specifically that of the undead and its historical manifestations through time. The book is broken down very simply. The chapters include Vampires, werewolf’s, zombies and Voodoo, Ghouls, and HP Lovecraft. That last one might throw you for a loop but my guess is it was a labor of love that was thrown in out of pure interest in the subject. Interestingly enough these sections are also broken down into the mythical creatures or legend aspects including locations, townsfolks, cultures and century aspects. The information provided is only that which helps in the understanding on what was important to the undead aspects mentioned.

The term “undead” used for this book is in reference to not only zombies, but legendary creatures that have died, come back from the dead or have risen to inflict terror, pain or other devious natures. For instance, under vampires Bob speaks about many creatures that have historical similarities though are sprung from old legends of where they are based. So Irish folklore might differentiate from British folklore and so on. The comparisons are made of like creatures like Banshee, Lilith, Striges, Succubus and others who all have shared characteristics. One character is being that of blood drinking, sexual visitations or night invasions. Other areas of interest include tales of real persons buried alive thought to be dead only to be re-discovered before real death set in.

Of course there’s more where that came from. We learn the true origin of the word Dracula, we cover the differences between Satan an Sheitan and are taken on journeys centuries old where times where differrent and old Gods were the way and of life and belief in those days.

With Werewolves, Bob talks about creatures that come from wolven backgrounds, or animalistic in nature. The stance of Christianity on Evil, rituals. lore and guises of shape shifters. What I loved about the sections as they are split nicely into titled paragraphs, so you can easily find the subject mater and go right to the important sources you seek to read. The same for Zombie and Voodoo. Much of the book is rooted in old school research, rather than modern day movie fare. A nice change with so many books on creatures throughout the marketplace.

The study of HP Lovecraft is fascinating as we given some of his upbringings, told about his rise as an author and question the very existence of his controversial works such as Necronomicon.

What the book says is that history has had many fears, and terrors created in a more cautious primitive s time when legends were a way of life to help keep order among towns. Thing such as going out at night were frowned upon with a fear that a certain undead myth would rise and devour.

There are many creatures to tackle, though Bob tackles ones that deeper inset into the old ways and gives up fact and fiction as reported though the pages. A great discovery of legends and fears abound.

Bob has a real knack for presenting the facts but in a way that’s still easy to consume. Accompanied by excellent illustrative work from Ian Daniels, makes this not only a fun read but an essential read for just the history content alone. With several introductions to undead creatures even I didn’t know about, I feel that much more educated after this read. Recommended!