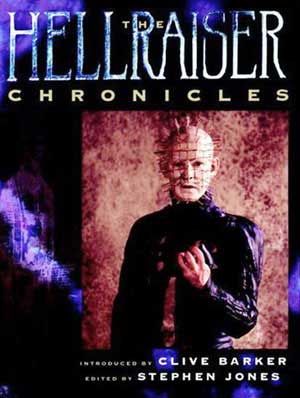 This happens to be one of those books I’ve known about for many years and kept putting off buying either to them being out of stock or asking too much on Ebay. Being a pretty hardcore Hellraiser fan, I was sure I’d pick it up one day ..sooner or later. If anything there is a general lack of Hellraiser books written available, so with this being one of a handful I was delighted to find some used copies available on amazon. The one I purchased sold for $1.86, not bad for any book for that matter.

At long last I held the much anticipated “Hellraiser Chronicles” and a chapter in my life had been fulfilled. With 96 pages the volume was pretty close to what I expected. Alot of great full color photographs with some quotes from the film and a intro by Clive Barker himself. The films covered are Hellraiser 1-3, which are in fact the best of the series anyway’s. Yep plenty of Pinhead shots and nice promo shots of posters, characters and actors. Really you cant wrong with that, as the appeal of Hellraiser has always had a strong visual appeal, whether you liked the stories or not.

If your looking for alot of text on the Hellraiser background and lineage, then you wont find that here. There are however a couple other books on the market which cover these for readers who want more background. This is essentially a nicely done photo book with some quibs here and there and a couple of interviews.

The great interest I had was getting some nice photos of some of the characters close up and in detail. All your favorites from the first 3 movies are here. We got Butterball, Pinhead, Chatterer, Channard. Barbie,. CD and all the rest of the gang with full on promo shots. If you an artist looking for a good reference point, then your all set. Instead of descriptions of the characters the features certain quotes from the film. If the character didn’t talk then its usually a pinhead quote or such.

The book contains a pretty worthy introduction by Clive Barker and is a pleasure to read. He digs the worms from his skull to give us some insight and does so in only the way Clive does.

What is a great about the book is the end chapter which interviews Bob Keen the special Fx wizard and creator of the practical FX characters. Included are several sketches, photos, storyboards, and actors in process of the transformation. We learn that by Hellraiser 3 they felt the need to improve on the designs a bit and gave the 4 main characters a bit of a re-versioned look. I suppose it was subtle enough that I really didn’t make the connection at first, thought the improvements are there but the essences of the characters were still kept pretty close. I only wish at some point they would have made an attempt to name the female cenobite something more official.

I did do some digging and learned this from Wikipedia and related “The horrid name, like her actions, is so vile it must forever remain unspoken. Those unfortunate enough to have discovered her true name have never returned to utter it. Therefore, she is referred to as merely the Female Cenobite. (She was also referred to as Sister Nikoletta’s in here human form)

Anyway’s…… back to the book. We also get a few early sketches of the “Pillar of Souls” a personal favorite art piece from the film of mine. However I will say that even with the early Clive sketches included, the end result pieces and makeup is much more suited for the film series and really is part of the attraction that drives fans to it.

This book is not really being pushed as a marketing edition anymore, though you can still get a cheap copy from Amazon used or like new. It’s good enough for me and still cherished as a piece of literature with photos dedicated to the film series.