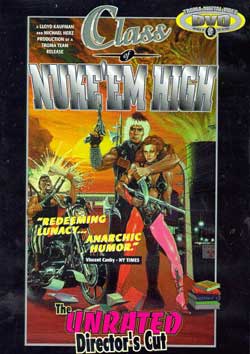 You think your high school life was rough, take a look at what the kids at Tromaville High go through in just the span of week; slime coming out of drinking fountains, the honor society turning into motorcycle punks and a monster growing in the fallout shelter. I wonder if that nuclear power plant next door has anything to do with it.

“Why don’t you go play with some plutonium or something huh? Leave us alone!”

You really do have to give it to cable television sometimes. Every now and again you will find a glimpse of a film like this late at night when most people are sleeping. I honestly believe most peoples first encounters with Troma and Lloyd Kaufman occurred because of this. The movie Class of Nuke ‘Em High is a horror fans version of any of John Hugh’s 80’s high school hit, full of all the throat punching gore you would expect from Troma.

Our story starts off at a nuclear power plant that happens to be right next to the local high school (it would be just another high school movie otherwise). There is a horrible leak but Mr. Finley the plant manager thinks everything will be alright, he seems to think a basic scrub down will fix it. Meanwhile back over at Tromaville High the school day is just beginning. We follow a scrawny nerd type as he calmly walks over to a water fountain to get a drink. As he brings his lips to it the clear water suddenly turns black and he starts to spit it up.

We go into a class room and just like in every other high school movie the teacher is informing the students about their horrible grades, except for our black water drinking nerdy boy. Suddenly the alarms go off for a radiation drill; the teacher informs all of the students to get up. They all get up, but geeky boy starts acting really strange he is foaming at the mouth. One of our main characters Warren is joking with a friend when suddenly the nerdy boy lunges at the two of them, they fight briefly before the geek runs towards the window and falls out. The boy lands on the street outside to the screams of the students already following the drill. As the nerd lays there in the street his skin begins to blister and melt off of his bones, in a pretty decent effect I might add.

Then the credits roll, and yes this is one of those movies that has a title song with the name of the movie in the chorus. You know you love it.

The real movie starts and we are actually introduced to our main cast. We saw Warren earlier with the nerdy guy. Warren is dating Chrissy, and you see the two of them haven’t quite had sex yet, much to the dismay of their different groups of friends. There’s Eddie, Warrens slime ball friend who seems to have his greasy little hands in everything, but still can’t get a girl. There’s also Spike. Spike is the leader of the Cretins.

The Cretins used to be Tromaville Highs honor society, but something snapped. Now they seem to have adopted late 70’s British punk style. Their style isn’t the only thing that has changed though. The Cretins make money by hustling other students of the school to buy their weed. Where do these former honor students get their drug of choice from, that’s right, the nuclear power plant. When they aren’t selling drugs these juvenile delinquents also make money by faking epileptic seizers in front of old ladies to steal their purses (I can’t make this up).

Eddie finds out about an awesome frat party and he thinks everyone should come, after all they all start college next year and they should be ready for it. After talking everyone in their group into going to the party, even the somewhat prissy Chrissy the night seems like its going to be great. Eddie of course is stopped by two of the Cretins who want to sell him a joint of their “atomic high” for the low price of ten dollars. At first Eddie doesn’t dig the idea, and then the thought of getting Chrissy high makes him change his mind.

Of course we have all seen the party seen played out in a variety of movies. Eddie and the group force the joint onto Chrissy and Warren who after only a couple hits decide that it is time for them to leave. Apparently Chrissy can’t hold her mary jane all that well because while they are on a trip upstairs to get their coats to leave she is hit with the sudden urge to have sex with Warren, who is tired of waiting. Like the sick pervert he is Eddie of course sticks his head up to watch the two have sex.

Neither Warren nor Chrissy seem to regret their actions until later that night. Warren has a crazy dream that he has a monstrous erection, Chrissy has a dream that she’s pregnant. The bad news is she is and that’s not even the worst of it.

Class of Nuke ‘Em High rarely has a dull moment. I will admit that the acting is bad, but that only adds to the movies charm. You can tell when you watch that the cast really was having fun making this movie. The budget is noticeable in quite a few scenes but for the most part the makeup and FX are pretty decent for a film this low in budget. There’s plenty here for gore hounds too with eye gouges, limbs being ripped off, and the melting nerd boy.

Class of Nuke ‘Em High is definitely another one of those call your friends and grab some brews type of movies. I wouldn’t have it any other way though. 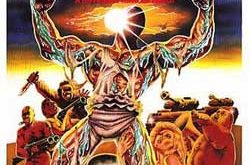